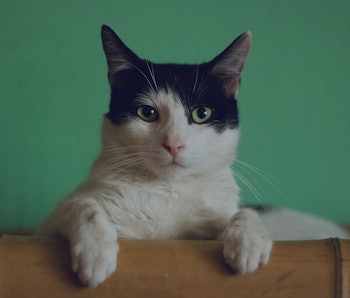 Around 10,000 years ago, cats decided it could be a good idea to live around humans. They essentially domesticated themselves, killed rodents in exchange for scraps given by early farmers, and eventually spread around the world by trade routes. Today, more than 600 million cats live with humans. But despite years of companionship, a question has remained: Do cats actually care about us?

According to a study released Monday in Current Biology, the answer appears to be yes. A research team led by Kristyn Vitale, a Ph.D. candidate at Oregon State University, is the first to demonstrate that cats can become attached to humans at the same level as dogs and babies. This indicates an “offspring-caretaker bond” and is further indication that scientists have underestimated cats’ socio-cognitive abilities.

“Attachment is a biologically relevant behavior,” Vitale explains. “Our study indicates that when cats live in a state of dependency with a human, that attachment behavior is flexible and the majority of cats use humans as a source of comfort.”

In the first half of the study, the test was given to 79 kittens. Seventy of these kittens were subsequently classified into an “attachment style,” while nine were “unclassifiable.” That’s the trouble with studying cats — sometimes they just don’t want to participate.

The test was repeated with 38 cats that were at least 1 year old or older, and the results were essentially the same: 65.8 percent of the cats were secure and 34 percent were insecure.

What does a secure cat look like? They are agitated when their person is away, less stressed when they return, and then go back to their business of exploring a space. Insecure cats showed signs of stress, like twitching their tail and staying away from their person even after a reunion happened.

The researchers also tried to see if they could change the cat’s attachment styles by enrolling them in a six-week training course — but that didn’t lead to any significant differences in behavior. Vitale notes that this lack of change likely means that “once an attachment style has been established between the cat and its caregiver, it appears to remain relatively stable over time.”

Meanwhile, a 1991 study that performed the same test with human infants found that 65 percent of the babies could be classified as secure and 35 percent as insecure. When dogs undergo the same test, their scores are closer to 58 percent secure and 42 percent insecure. Historically, dogs have been evaluated to be especially unique animals because of their proclivity for forming attachments to humans.

It’s increasingly apparent that, while cats perhaps need us less than dogs do, they still get a lot out of relationships with humans. After all, some scientists think that cats treat humans like, well, cats — which, considering cats, seems like some sign of respect.

Worldwide, domestic cats (Felis silvestris catus) outnumber domestic dogs (Canis familiaris). Despite cats’ success in human environments, dog social cognition has received considerably more scientific attention over the last several decades. A key aspect of what has been said to make dogs unique is their proclivity for forming attachment bonds, including secure attachments to humans, which could provide scaffolding for the development of human-like socio-cognitive abilities and contribute to success in human environments. Cats, like dogs, can be found living in social groups or solitarily, depending on early developmental factors, resource distribution, and lifetime experiences such as human interaction. Despite fewer studies, research suggests we may be underestimating cats’ socio-cognitive abilities. Here we report evidence, using behavioral criteria established in the human infant literature, that cats display distinct attachment styles toward human caregivers. Evidence that cats share social traits once attributed to dogs and humans alone would suggest that broader non-canine-specific mechanisms may be needed to explain cross-species attachment and socio-cognitive abilities.