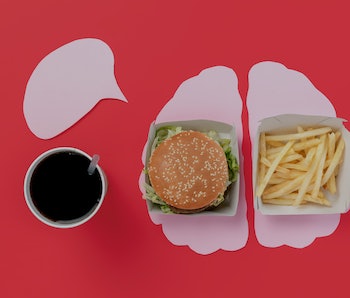 The science of obesity, tends to focus on how the condition alters heart function, the metabolism, or other bodily processes. Little attention is paid to what, if anything, obesity might be doing to our brains.

But new results suggest obesity’s toll isn’t just exacted on the body — it may cause brain damage, too. And because of the areas obesity seems to affect, this damage could make obesity even harder to beat.

A preliminary study to be presented at the Annual Meeting of the Radiological Society of North America suggests that there’s a connection between obesity and white matter in the brain. Using brain scans of 59 obese adolescents, researchers found that they had significant differences compared to controls in the white matter in the corpus callosum and the middle orbitofrontal gyrus areas of the brain.

These areas of the brain are thought to be involved in appetite, emotions, and cognition, study co-author Pamela Bertolazzi, a graduate student at University of São Paulo, said in a statement.

The effects of these changes in the brain are twofold. They can impact areas of the brain associated with appetite control — potentially damaging circuits related to appetite. They also affect how the brain ages, and cognitive function.

The results are preliminary, but they add to a growing pile of research suggesting that obesity may trigger a series of changes in the body that ultimately lead to brain damage.

How does obesity impact the brain?

This is not the first sign that obesity affects the brain — previous research suggests there are a number of ways the condition alters brain structure and function.

A 2014 review suggested a link between obesity and brain shrinkage. In this paper, the authors suggest that because obesity increases inflammation in areas outside the brain, the body’s response to the inflammation triggers a local response in the brain. When that happens, it may change how neurons communicate with one another, or even lead to the loss of neurons.

Similarly, a 2017 review found that obesity-related effects on the brain go “above and beyond” what would be expected in typical aging.

The new study appears to confirm these past results.

The new study also suggests that obesity can trigger inflammation in the body that then moves into the brain.

The researchers found heightened levels of two biomarkers for inflammation in the obese adolescents’ affected brain areas. They also saw unusually high levels of the hormones leptin (which controls hunger, and fat storage) and insulin (which controls how cells use glucose for energy) — both of these hormones are thrown out of whack by obesity.

The patterns could signal different pathways through which obesity changes the brain, the researchers suggest. On one hand, the altered levels of leptin and insulin hint at a connection between white matter loss and obesity-related changes to those hormones. But the presence of the inflammatory markers implies that there may be additional inflammation at work, they said.

This study doesn’t tell us which of these pathways is primarily responsible for the changes in the obese adolescents’ brains. Nor does it address the question: If you lose weight, is it possible to reverse these changes?

Previous research suggest that there is some hope. In the 2014 review, for example, researchers found that caloric restriction, exercise, and, in some cases, bariatric surgery may improve cognitive function in obese individuals. That suggests taking these positive steps to a healthier lifestyle could help to reverse the changes obesity wreaks on the brain.

Further work is needed to find out whether that is true. But if it is, it could be critical information for treating the 94 million people in the United States and many millions more throughout the world who are obese.

Purpose: The aim of this study is to investigate the influence of childhood obesity on changes in brain connectivity, comparing to lean adolescents, using DTI by Magnetic Resonance (MRI).

Method and Materials: The images were obtained on 3T MRI scanner. The sample consisted of 120 subjects: 59 obese adolescents and 61 healthy adolescents, aged 12 years to 16 years, and matched regarding gender, age, sexual development and schooling. The images were processed with the FSL-Tbss (Tract Based Spatial Statistics) program and analyzed statistically by the programMATLAB-SPM8 (Statistical Parametric Mapping) with T-test (obese group versus control group). The DTI-measure used was the Fractonal Anisotropy (FA). In this study, the significant statistical level considered was 95% or p < 0.05. Blood tests were done to evaluate inflammatory markers ratios in order to elucidate the systemic inflammation associated with the obesity. Then, correlation maps with inflammatory markers (TNF-a, TNF-ß, IL1-a, IL1-ß, IL6). was performed to evaluate the influence of inflammation on cerebral changes.

Results:The statistical and exploratory analysis of 339350 voxels showed a reduction of the FA values in obese patients when compared to the control group in regions located in the body of the corpus callosum (pfwe <0.001), splenius of the corpus callosum (pfwe <0.017) and medium orbital gyrus (pfwe <0.044). There was no region with increased FA in obese patients. Correlation maps revealed a negative association with TNF-ß and FA values in splenium of Corpus Callosum (pfwe = 0.028; z = 3.66; cluster = 10 voxels). IL6 also presents negative correlation with FA values in medial orbital gyrus (pfwe = 0.028; z = 3.58; cluster = 10 voxels) and body of Corpus Callosum (pfwe = 0.05; z = 3.29; cluster = 5 voxels). There were no positive correlation results with inflammatory markers and FA values.

Conclusion: The data reveal a pattern of damage in important regions responsible for control of appetite, emotions and cognitive functions in obese adolescents, and correlation with some inflammatory markers. Further studies need to be performed to elucidate whether, in fact, obesity inflammation is a consequence of structural changes in the brain.