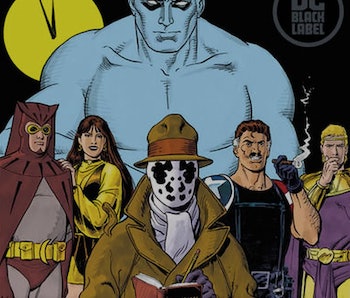 In the year 2019 in the world of Watchmen, Doctor Manhattan is still in space, Silk Spectre has become a vigilante-hunting cop, and Ozymandias … well, we’re not really sure what he’s up to. But one key character from the original story who’s still alive is notably missing in action: Dan Dreiberg (aka, Nite Owl).

In an earlier episode of the HBO series, Watchmen dropped a subtle hint that Nite Owl is currently in jail for breaking anti-vigilante laws. However, a recent clue shared on the show’s fascinating “PeteyPedia” website could explain exactly what happened to Dreiberg and even reveal how he could be influencing the events of the show from behind the scenes.

Warning! Speculative spoilers for Watchmen below.

As Silk Spectre reveals, she and Nite Owl conducted various missions thanks to funding from Dreidberg’s own company, MerlinCorp. When the FBI agent seems confused, she explains that the same company was making and selling technology used by law enforcement.

“Have you ever wondered why the cops fly f###ing owlships?” she says.

What’s interesting here is the revelation that Nite Owl’s company was providing cutting-edge technology to the cops. You probably noticed that the Tusla police had an owlship-looking vehicle in Watchmen Episode 1, but this confirms that Dreidberg’s inventions aren’t limited to just one police department in Oklahoma. They’re everywhere.

And assuming that Nite Owl tech is being sold all over the country, is it such a leap to think that maybe the inventor isn’t jail at all? It’s easy to imagine a scenario where the former superhero leveraged his business in exchange for his freedom or even cut some sort of deal with the government. Nite Owl could be skulking behind the scenes, feeding police across the country new technology in exchange for his continued freedom (and influence).

With Episode 4, Watchmen seems to be setting up Lady Trieu as the new Ozymandias (a rich genius with questionable goals), but if Nite Owl really is still out there selling technology to the cops, then maybe he’s the bigger threat after all. And now that Silk Spectre is back, how long will it be before her old lover shows up as well?

More like this
Entertainment
5.12.2022 10:00 AM
How Watchmen uses time travel to explore the sinister cycles of racism
By Chrishaun Baker
Entertainment
5.12.2022 3:00 PM
How Time Traveler's Wife became TV’s most intimate time-travel show
By Dais Johnston
Culture
5.19.2022 12:30 PM
Is The Staircase a true story? What the HBO show gets right and wrong
By Meg Walters
Share: