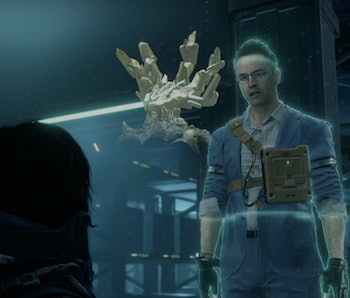 In the second episode of Death Stranding, you’ll come across some golden, hand-shaped crystals dotted across the ground as you’re making your way toward the Waystation West of Capital Knot City. But you won’t be able to pick them up just yet. These are chiral crystals, which you can use as a form of fuel and to fabricate equipment. Below, we’ll explain what you need to do in order to collect them, what they can be used for, and how you can find more of them throughout the game.

Why can’t I pick up chiral crystals?

Even though they’re visible as icons on the world map — like dropped cargo, ladders and other environmental resources — you won’t be able to collect these items until you progress past a certain point in the main story. Once you reach the Distribution Center West of Capital Knot City and connect it to the chiral network in Episode 2: Amelie, you’ll be prompted by your holographic pals to rest for a night in your private room. Once the morning comes and Sam’s all fresh and clean, you’ll get a new assignment — [Order No. 8] Collection: Chiral Crystals. Once you accept, you’ll receive a Crystal Collector that allows you to harvest these objects out in the field and transport them safely.

Return to the treacherous region you just passed through to access the Distribution Center, just slightly south of the Waystation West of Capital Knot City. Keep a watchful eye out for BTs as you go. (We have some spoiler-free tips about how to use your scanner to avoid them, here.) After you’ve collected the specified amount of Chiral Crystals, return to the Distribution Center and recycle them. The crystals will then be added to your inventory for crafting purposes.

So, what do chiral crystals actually do in Death Stranding?

Sam can use chiral crystals to make a wide variety of equipment and structures. They help to power the floating carrier, which you can either ride on or use like a shopping cart to carry more packages. The floating carrier is a pretty nifty gadget; you can use it either as a hoverboard to make navigating rough terrain easier for Sam, or to schlep added cargo. Either way, it’s a nice addition to your arsenal in the early stages of the game. Later on, you’ll need chiral crystals to power the autopaver, which allows you to construct roads between points on the chiral network, making travel to places you’ve already visited a bit more straightforward.

Where can I find more chiral crystals in Death Stranding?

The exact locations of these crystals are random on each player’s map, but chiral crystals have a high likelihood of appearing in rainy areas. Unfortunately, that’s where BTs often lurk, so be on your guard during the first few hours of your adventure.

Later in the game, if you find yourself hard up for this material, you can challenge a larger BT — they’re the ones that attack you after you’re pulled into the ground by the grasping, dark hands of their minions during a black timefall. You’ll need some pretty strong weapons at your disposal, but you’ll get a whole heap of crystals as a reward. You’ll also make little BB pretty happy, so what’s not to like about that?

That’s all you need to know about Chiral Crystals in Death Stranding. If you’re curious about how likes work, whether your date of birth affects the gameplay, or the advantages of avoiding combat, check out some of our other guides.