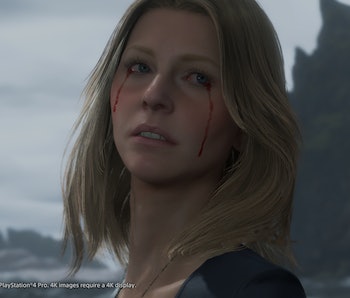 After four long years, Death Stranding is finally available for Kojima fans to sink their teeth into. But as most players are grappling with the basics of figuring out what Likes do or which birthday to choose, others are thinking longer-term. Can the decisions you make in the first few hours determine whether you see the “good” ending? Is it necessary to fight BTs and MULEs along the way? We’ll unpack what we know below.

Don’t worry — only mild spoilers ahead! We have no intention of ruining the ending of Death Stranding for you. (Not yet, anyway.)

Does *Death Stranding have a pacifist route?

Death Stranding doesn’t have a full pacifist route in the Undertale sense. In Toby Fox’s cult-hit indie RPG, choosing not to kill the monsters you encounter allows them to become your friends. Each one requires a different approach, whether it’s cracking a joke, flirting, or giving a good boy some well-deserved pets. The story plays out entirely differently in a pacifist run, allowing you to explore new areas and learn even more about the villain’s motivations. While Kojima’s latest doesn’t go that far, there are clear perks to avoiding combat in Death Stranding.

Early on, you’ll want to avoid BTs like the plague. Eventually, you’ll gain more powerful weapons and tools to defeat them, but the more you do so, the angrier and more dangerous they become. As the Washington Post puts it, “This game continues Kojima’s trend of prioritizing pacifism over violence. The game gets harder (and more annoying) the more you actually kill.”

How can I avoid fighting BTs in Death Stranding?

The pinwheel-shaped scanner on Sam’s shoulder can be particularly helpful if you’re looking to avoid fighting BTs but need to pass through their turf. Once you find yourself in a timefall downpour, your scanner will always point toward the nearest BT, and show you a variety of signals. These include:

Does Death Stranding have multiple endings?

While limiting aggressive interactions with BTs impacts the gameplay, it doesn’t alter the outcome of the story. By all accounts, Death Stranding has just one ending, which is essentially a feature-length cutscene. Kojima wanted to tell the story in a very specific way, so unless some intrepid explorer discovers some ultra-secret hidden ending, assume that there’s only one way for the game to end. In the meantime, we have a few speculative notions of our own about how the game’s conclusion might play out, judging from the soundtrack.