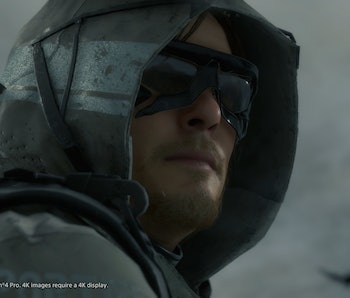 It’s been a long wait, but Hideo Kojima’s long-awaited next game is finally here. Death Stranding lets players step into the shoes of Sam Porter Bridges, played by the sometimes naked, sometimes weeping Norman Reedus. As Sam, your task is to bring a fractured, post-apocalyptic America back together, one delivery at a time. But before you even start exploring the game’s vast landscape or grappling with its thorny philosophical questions, you’ll run into a question so obvious it might seem like a trick at first glance: when is your birthday?

If you’re the impulsive and immature sort (such as myself) and inclined to name your game protagonists stuff like “Poopface,” you might just breeze past this early moment in Death Stranding, or give a silly date like 4/20. The field will be autofilled from the information tied to your PlayStation store account, though you’re able to change it. After you enter the date, you’ll see a message that reads, “higher levels of DOOMS abilities have been observed in those born under constellations such as Cancer, Pisces, Cetus, Delphinus, and Gigas.”

Though these dates will vary depending on where you are in the world, here’s a rough idea of when these constellations are visible in the Northern Hemisphere:

A couple interesting tidbits about these constellations: four of the five are associated with the element of water, or the ocean. Cancer and Pisces represent a crab and fish respectively, while Cetus and Delphinus are taken directly from the Latin words for whale and dolphin. Gigas is an alternative name for Orion, the venerated hunter and hero of Greek myth, placed into the stars by Zeus for his deeds.

We also wouldn’t be surprised if there were some funny little Easter eggs if you use Kojima (August 24) and Reedus’ (January 6) birthdays.

If you’re like us, you’re likely wondering what DOOMS abilities are before even getting into the meat of the game. Essentially, they’re an after-effect of the cataclysmic Death Stranding event, which allows certain people to see beached things, or BTs. In the opening moments of the game, we learn Sam and Fragile share this unique trait, and that Sam is a “level 2.” This is the skill that allows Sam to hide from — and later engage with — unseen baddies as he’s hoofing it all over the country.

Death Stranding is out now on PlayStation 4.

More like this
Gaming
5.12.2022 1:30 PM
A brief history of video game poop
By De'Angelo Epps
Gaming
5.16.2022 8:22 PM
PS Plus library includes a rad Red Dead DLC and 7 more secret gems
By Joseph Yaden
Gaming
6 hours ago
You need to play the most overlooked horror game of all time on Switch ASAP
By David Grossman
Related Tags
Share: