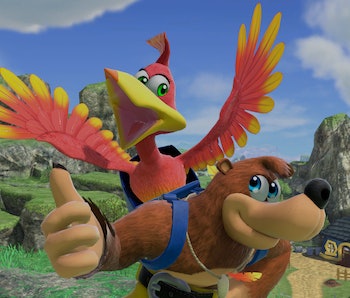 So, do you want to know the fifth additional DLC (downloadable content) character in Super Smash Bros. Ultimate? Us too. And as of now, it’s anyone’s guess when Nintendo will make that announcement. So, let’s make some very educated guesses.

This week, we reported, based on sketchy rumors, that the fifth character in the DLC pack, Fighters Pass 1, would be Ryu Hayabusa (of Tecmo’s Ninja Gaiden franchise) and that his inclusion would be announced in an upcoming Nintendo Direct scheduled for November. All of that is still possible, or, it could be complete rubbish. You know how the internet can be.

Hours after we ran that story, Nintendo revealed on social media that director Masahiro Sakurai will hold a 40-minute preview of the new DLC character, Terry Bogard (from the Fatal Fury franchise from SNK) on Wednesday. In a follow-up tweet, Nintendo added that there will be no news regarding the fifth character.

There’s no reason not to believe Nintendo. Tomorrow’s preview of Terry Bogard will likely not contain any news regarding the fifth and final character in Fighters Pass 1. (Fighters Pass 2, which will contain even more fighters, was previously announced earlier this summer and is expected to release throughout 2020 and 2021.) And hey, if you’re reading this after the demo and the fifth character has been revealed, feel free to make fun of me on Twitter.

But let’s take Nintendo at its word. For now, no one has any clue when Nintendo will reveal the fifth DLC character for Super Smash Bros. Ultimate. But there are two big possibilities.

That rumored Nintendo Direct on November 13

As we hypothesized, there could still be a Nintendo Direct in November (rumors say November 13) that zeroes in on three big games: Pokémon Sword and Shield, Animal Crossing: New Horizons, and Super Smash Bros. Ultimate. New leaks involving Sword & Shield’s starter evolutions seem to support the rumors; initially surfacing in October on the totally reliable 4chan, they’ve accurately predicted a month ahead of time two out of three Pokémon in Sword & Shield.

The Game Awards on December 12

Remember last year at the Game Awards, which were also the night Super Smash Bros. Ultimate came out? Remember how, at the end of the awards, Geoff Keighley gave Nintendo time to reveal Joker as the first DLC fighter? Reader, I remember. I remember how the reaction videos were bananas.

One year later, it’d be fitting for Nintendo to repeat that hashtag #hype for the fifth and final DLC character (for Fighters Pass 1). Now that Nintendo has already made the dreams of many fans come true by giving them their most wanted requests — namely Dragon Quest’s Erdrick and Banjo-Kazooie — candidates for fighter numero cinco is wide open. Will it be Sora? Doomslayer? Geno? Someone from Final Fantasy? Mr. Fortnite? (I didn’t play a lot of Fortnite, sorry.)

One thing’s for certain. It ain’t gonna be Waluigi. Waa.