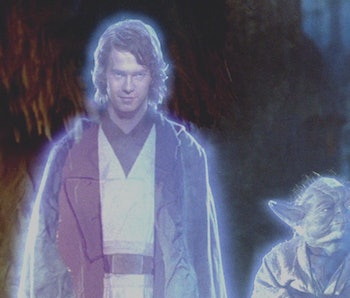 Ever since Mark Hamill announced that Luke would appear as a Force ghost in Star Wars: The Rise of Skywalker, fans have wondered if anyone else would join him from the Jedi afterlife. However, one pesky rumor making the rounds online seems to have some Star Wars fans worried Lucasfilm will remove Force ghosts entirely, due to China’s strict standards for distributing movies made beyond its borders.

Since the Chinese box office is usually a huge source of international revenue for Hollywood studios, fans speculated that they’d been removed to appease Chinese moviegoers. While it’s unclear how the rumors got started, Star Wars fans were beside themselves wondering whether China’s apparent (and false) hatred of ghosts and spirits would somehow affect the story of The Rise of Skywalker. Well, not only are the rumors false, but the notion of China’s wholesale opposition to the depiction of ghosts on film simply isn’t true.

The knowledgeable u/Yazman took to Reddit to make clear that any and all rumors about China’s power over the final cut of The Rise of Skywalker are simply untrue. Not only that, but they stem from ignorance of the culture and the history of high-grossing movies in that market.

In fact, Chinese culture allows ghosts in film when it’s “just ancestors, wise spirits, benign/friendly ghosts, or the story is a family-friendly one,” the redditor notes. What the Chinese government bans are portrayals of violent ghosts, or spirits who intend to harm the living. As an example, Disney’s Coco was well-received in China, grossing more than $17 million in its opening weekend. The Pixar film revolves around spirits, the dead, and the afterlife. Clearly, the “ghost ban” has been overstated.

Then, of course, there’s the fact that the latest Star Wars trilogy (and Solo, for that matter) has not been a financial success in China, especially compared to other American films. Star Wars has been a huge element of American popular culture since the 70s, but the original trilogy wasn’t even released in cinemas there until 2015, to drum up excitement ahead of The Force Awakens. The Chinese filmgoing audience doesn’t have the same decades-long attachment to these characters that we do.

When Star Wars: The Force Awakens dropped in China, it grossed around $124 million. That’s not a bad number, sure, but then along came The Last Jedi, which included Force ghost Yoda (and yes, he remained in the film).

The Last Jedi only grossed a measly $42.5 million. That’s a huge drop in box office numbers. In fact, the Chinese market is so uninterested in Star Wars films that even Skyscraper, the forgettable Dwayne Johnson action flick, made far more money. There’s nothing to worry about when it comes to China banning Force ghosts because, simply put, they just don’t care.

A couple months back, Making Star Wars claimed the Force ghosts of Anakin, Luke and Leia — whom we know will die in the film — would return in the final act of The Rise of Skywalker. Fans even speculated Obi-Wan Kenobi could also turn up. While none of the trailers have shown any Force ghosts, we wouldn’t be surprised if the filmmakers kept him a secret. (Even the most accurate spoiler-mongers didn’t predict Yoda would be in The Last Jedi.)

Other factors may have influenced director J.J. Abrams’ decision to remove the Force ghosts, if he actually did so. Recent news of reshoots is just one example. There’s also the editing process. It’s possible Abrams may have cut the Force ghost scenes for time, or even to help the flow and pacing of Episode IX. We won’t really know for sure if the Force ghosts made it into the film until its release in December, but whatever the reason for their potential removal, China is not to blame.