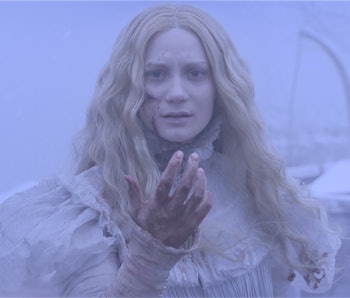 China doesn’t like ghosts, even though they’re haunted by them.

Crimson Peak, the latest movie from gothic auteur Guillermo del Toro about an old Victorian mansion haunted by specters, failed to scare and fell flat at the domestic box office. In recent years Hollywood studios have used the overseas market, particularly China, as a safety net to recoup losses — but Universal and Legendary will not have that chance. In China, ghosts aren’t welcome.

A “No Ghosts” ban on foreign movies is imposed to discourage interest in “cults or the supernatural,” a ruling that will likely be Hollywood’s biggest challenge in the near future when Chinese dollars are valued the most. Next year Marvel will have the supernatural superhero Doctor Strange and Sony with its Ghostbusters remake, both freight trains on a collision with Communistic censorship.

Strangely, the Chinese have a rich native mythology of ghosts and the afterlife of their own.

“The irony is that ancestral worship is an integral part of China’s history,” Jenny Cho tells Inverse. A board member of the Chinese Historical Society of Southern California, Cho authored Chinese in Hollywood, a book that traces the history of Chinese in the American movie industry.

When we talk about China’s ban of ghosts in movies, she brings up how spiritual worship is actually embedded in the daily life of many Chinese. “Many homes have an altar that is set up to pay respects to ancestors and folk gods. Folk gods such as Kwang Kung are based on actual people who lived in centuries past and are now worshipped in temples. As much as a government would like to control the thoughts of its people, it can’t force someone to stop believing in ghosts if they do in secret.”

But they can force them in movie theaters. “China’s government is essentially atheist, and maintains strict control over what media can be consumed by its citizens,” Cho says. While the government tolerates certain amounts of spiritual expression, they “do not tolerate any practices that fall outside of its policies.”

Hollywood movies with CGI ghosts flying around a dilapidated house? Banned. Cooking a meal to an empty table because you believe an ancestor will be there in spirit that evening? Perfectly acceptable. In late summer the Chinese celebrate the “Hungry Ghost Festival,” an analog to Halloween where homage is paid to the dead believed to wander when the barrier to the afterlife is its thinnest. Despite commercialization in modern times (“Getai” singers who perform during the festival have reality TV shows), China remains strict on ghosts in entertainment.

“The threat is that these movies will introduce Chinese audiences to thinking about the universe in ways that the Chinese government cannot control,” Cho adds. “A worldview that involves real ghosts and brings up questions that cannot be explained away by science and rational thinking is unacceptable.”

Besides movies from abroad, China’s homegrown crop of horror are typically castrated, involving plot twists like mental illness or vivid dreams reasoning why the characters see apparitions. But in the 1980s, comedy horror films had goofy kung-fu fighters face off against vampires and ghosts with films like Mr. Vampire and A Chinese Ghost Story ruling theaters. According to Cho, the British rule over Hong Kong allowed these movies to thrive.

“Hong Kong filmmakers in the 1980s and early 1990s were able to get away with making films like A Chinese Ghost Story because they were under British rule before 1996,” says Cho. “Now, they have to play by China’s rules.” In 2014, The House That Never Dies was a genuine horror movie hit in China, but — spoiler alert — the ghosts were hallucinations.

Is this the future of Hollywood? Will the ghosts that the Ghostbusters bust be justified? Cho speculates a bleak future where Hollywood sidesteps China’s policies by approaching forms of self-censorship.

“They might create a horror film with two endings,” she explained, “A ‘China’ ending without real ghosts, and a ‘rest of the world’ ending, i.e. the film they want to make.”

The opening line to del Toro’s Crimson Peak is blunt: “Ghosts are real. This much I know.” But to release in China, del Toro might sacrifice his artistic voice and have Mia Wasikowski’s Edith say “Ghosts are real. This much I sort of, kinda, probably know.” A future where censorship is the solution to abide by foreign laws is scarier than any ghost.