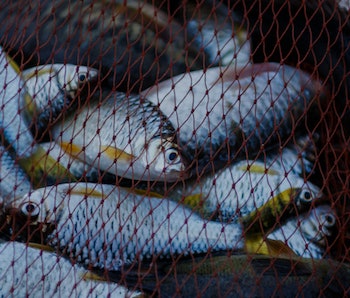 Meeting the world’s growing demand for seafood is a puzzle that crosses national borders, traversing the world’s oceans and freshwater fisheries: Global fish consumption has risen twice as quickly as population growth over the past five decades, and overfishing is creating unexpected problems for humans. As a result, sustainability researchers are intensely focused on how we can meet global demand without depleting the world’s supply of fish.

And while the free market may seem like an unlikely ally to the environment, the finance sector could play a crucial role in solving seafood’s sustainability problem, finds a study published Wednesday in the journal Science Advances.

The authors of the study analyzed media coverage in two major fishing trade publications and data from more than 3,000 shareholders of 160 seafood firms, and they found three major financial sector tools that could push the international fishing industry to be more sustainable: banks, stock exchanges, and activist shareholders.

So, how can finance change fishing?

When a bank lends money to a business, the loan often comes with rules about that the borrower can and can’t do. Usually, the criteria is only financial, Jean-Baptiste Jouffray, Ph.D. candidate at the Royal Swedish Academy of Sciences and Stockholm University and the lead author of the new study, tells Inverse.

But if more banks were to include sustainability criteria, “that could be a game changer,” Jouffray says. Companies would have to comply with those rules, and “since they need that money, it could be transformative.”

For example, Jouffray and his team write, earlier this year the agriculture giant Louis Dreyfus Company agreed to a $750 million loan with an interest rate linked to the company’s sustainability, measured in carbon dioxide emissions, electricity consumption, water usage, and solid waste.

“The better the company is performing, the lower the interest rate to pay back the loan,” Jouffray says. “So this is a very strong incentive.”

To really make sustainability loan covenants effective, Jouffray says, they should be paired with governmental regulations. If sustainability programs are voluntary, and one bank tells a lender it has certain rules, “the client will go to the bank next door that doesn’t.”

2. Stock listing rules could require it

To qualify for listing in a stock exchange, companies also have to follow certain financial guidelines. This presents another opportunity, the study authors write, to add sustainability regulations.

In the case of seafood, the big companies are mainly concentrated in just a handful of stock exchanges. So targeting those markets could have a big impact.

There’s already some precedent for “stock exchanges as gatekeepers,” the authors write.

In 2014, for instance, a company called China Tuna filed for an initial public offering (IPO) in the Hong Kong Stock Exchange. But after a complaint from Greenpeace saying that the company used outdated data and overlooked environmental risks, “the company literally disappeared,” Jouffray says. In fact, as The Guardian reported at the time, China Tuna may have simply been a shell company that, in a sense, never truly existed — highlighting some of the uniquely perplexing challenges of regulating global fisheries.

“[Deutsche Bank] looked like they hadn’t done their homework,” Jouffray says, creating an example of how being environmentally irresponsible can translate to having a bad financial reputation. “That’s the missing piece right now,” he adds. “We don’t have a strong enough example yet of ecological risk that translates into financial risk — yet.”

Some voluntary efforts are already underway among stock exchanges. One initiative, called Sustainable Stock Exchanges, provides a platform for different exchanges to develop best practices for setting sustainability guidelines for companies. While still optional, “it’s the beginning of something,” Jouffray says of the initiative.

3. Shareholder activism may force companies to do better, but it faces obstacles

Shareholders can play a role in shaping company policies, too. Shareholder activism has gotten some attention — and results — lately: Last year, shareholders at Starbucks urged the company to ban plastic straws, and the company has since announced it will do so by 2020.

In seafood, however, shareholders may be less powerful.

Many of the biggest players are privately owned, Jouffray says, so they’re not accountable to investors. Of the three financial tools, shareholder activism is probably the weakest. But Jouffray says the idea is still worth bringing into the conversation, in part because of how it plays in the media.

“We took the approach of being quite hopeful, because it is one of the levers that got much attention recently,” he says.

Amid all three of these strategies, Jouffray emphasizes that it’s crucial for financial institutions and governments to work in tandem. “Identifying the leverage points is one thing, implementing them is different,” he says.

Imagining that kind of international, inter-sector teamwork might seem daunting. But Jouffray remains optimistic. Things are starting to change, he says, and even optional programs are a good start: “What is today voluntary, could become tomorrow’s regulation,” he says.

“The financial sector is slowly, but hopefully surely, awakening to their role and responsibility in driving the sustainability transformation.”

Can finance contribute to seafood sustainability? This is an increasingly relevant question given the projected growth of seafood markets and the magnitude of social and environmental challenges associated with seafood production. As more capital enters the seafood industry, it becomes crucial that investments steer the sector toward improved sustainability, as opposed to fueling unsustainable working conditions and overexploitation of resources. Using a mixed-methods approach, we map where different financial mechanisms are most salient along a seafood firm’s development trajectory and identify three leverage points that can redirect capital toward more sustainable practices: loan covenants, stock exchange listing rules, and shareholder activism. We argue that seafood sustainability requirements need to be integrated into traditional financial services and propose key research avenues for academic, policy, and practice communities. While our study focuses on the role of finance in seafood sustainability, the insights developed are also of high relevance to other extractive industries.