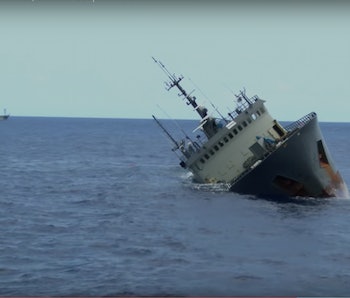 The Indonesian government has arrested the last of six vessels known to poach toothfish, also known as Chilean sea bass. Sea Shepherd Global posted a video today in which fisheries minister Susi Pudjiastuti says that she will ask the navy to sink the MV Viking within the next few days.

The vessel, flagged out of Nigeria, is the last in operation of the “Bandit 6,” a group of fishing boats that Sea Shepherd has identified for illegal toothfish activity. The Sea Shepherd’s MV Steve Irwin had been operating covertly in Indonesia for the past several weeks, and alerted the government to the Viking’s presence in national waters, according to a press release.

Toothfish, marketed as “Chilean sea bass” to high-end seafood markets, has been a target for illegal fishing for decades. The fish is very valuable, and policing is scarce, especially in international waters around Antarctica. In 2000 an estimated 16,000 tons of the fish were legally harvested in Antarctic waters, and maybe twice that much again were taken by poachers, according to the U.S. Department of Commerce.

Sea Shepherd has targeted toothfish poaching as part of its annual campaign around Antarctica. Last year the Sea Shepherd’s MV Bob Barker chased the MV Thunder, a notorious poaching trawler, for 110 days and more than 10,000 nautical miles before the Thunder sank — likely in a deliberate attempt to destroy the evidence on board.

“In a short span of 15 months, the entire fleet of the toothfish poachers is in disarray, with no poachers fishing in Antarctica for the first time,” said Sea Shepherd Captain Siddharth Chakravarty in a release. “International cooperation, spearheaded by Sea Shepherd’s at-sea campaigns, has directly resulted in one of the swiftest and biggest successes in marine conservation history.”

Meanwhile Sea Shepherd’s effort to stop this year’s Japanese whaling campaign in Antarctica has been declared a failure. By now the Japanese fleet has probably fulfilled their planned quota of 333 minke whales, Sea Shepherd Global announced earlier this month in a release.

The Japanese whalers expanded their territory, and Sea Shepherd had no way of locating them. The governments of Australia and New Zealand refused to intervene directly or give Sea Shepherd coordinates to find the fleet.

“We are very disappointed in the Australian and New Zealand governments,” said Jeff Hansen, director of Sea Shepherd Australia in the release. “They initiated a court case against Japan for illegal whaling. They won the case. Japan ignored the case and in response, both Australia and New Zealand have simply turned their backs and walked away, seemingly content to allow the Japanese crimes against the whales and humanity to continue. It is a shameful lack of response.”

Now that the known toothfish poachers are out of the water, it’s a safe bet that the next time the Japanese whaling fleet heads out, Sea Shepherd will be there in full force.