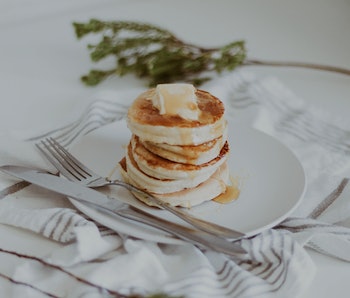 There’s nothing quite like the rich, creamy taste of butter. But for those who want to cut down on their animal fat intake, it’s nice to have alternatives. A strange new study in the chemistry journal Applied Materials and Interfaces suggests that we could have a new type of butter made mostly out of water — with minimal fat.

Alternatives to butter already exist, of course, but they aren’t exactly spreadable: There is a huge range of plant-based fats, including olive oil, coconut oil, and all sorts of other seed and nut oils. For a spreadable alternative, many turn to margarine, which has a complicated health record. But the team behind the new study, from Cornell University’s Department of Food Science, think a new water-based butter is possible.

They describe their findings in their paper, published on June 27. Using canola oil, beeswax, water, and some added emulsifiers, they figured out how to create a spreadable butter-like substance that’s up to 80 percent water.

Compared to butter, which is at least 80 percent fat, this is a huge difference. And while the product produced in this Cornell lab probably won’t be in your local grocery store this year, the New York State Dairy Promotion Board partly funded the research, so it’s clear that the food industry sees potential in the future applications of a butter substitute that’s mostly, well, not butter.

How Do They Make Butter With So Little Fat?

The key to this whole achievement is some slightly complicated materials science and physics, but at its core, the idea is simple: making something with 80 percent water hold together like a substance that’s 80 percent fat.

The key to this water-based butter is a process that combines oil and water ingredients into a material called a high internal phase emulsion. HIPEs consist of two substances that don’t normally mix, like an oil and a water, which are blended together in such a way that they wind up as a stable substance.

In typical emulsions, one ingredient is encapsulated in the other. Much like a foam, in which a liquid is full of air pockets, an emulsion usually consists of a liquid that’s encapsulated by fats. There’s a limit to how much liquid a fat can encase, though, usually thought to be about 74 percent.

This is where the HIPEs come in. By adding carrageenan (an extract of seaweed used to thicken products like toothpaste) to the water and beeswax and an emulsifier called glycerol monooleate to the canola oil, the team essentially increased the ability of both the oil and the water to form an emulsion in unusual ratios.

The beeswax stiffened the crystals formed by the canola oil, whereas the carageenan made the water gel-like. This combination allowed them to whip it all together into a spread that resembles a cross between butter and mayonnaise.

Is This Water Butter Any Good?

In short, not yet.

The researchers behind this work were more concerned with creating a substance that didn’t break down quickly than they were with making something that tastes good. But they point out that food chemists should have no problem taking care of the palatability of the product.

“We can add milk protein or plant-based protein, and since the water acts like a carrier, we can adjust for nutrition and load it with vitamins or add flavors,” Alireza Abbaspourrad, Ph.D., an assistant professor of food chemistry and the paper’s senior author, said in a statement. “Essentially, we can create something that makes it feel like butter — and instead of seeing a lot of saturated fat, this has minute amounts. It’s a completely different formulation.”

This last part raises a huge question about why scientists even want to make this stuff:

Is Butter Even That Bad for You?

One of the major questions raised by this paper is…Why?

Butter is one of those food ingredients, like eggs or coffee, whose reputation among scientists and doctors always seems to be in flux. One week it’s a superfood, the next week it’s a poison.

This new method for making HIPEs could use canola oil, as in the current study, or it could use small amounts of butter, essentially making a little bit of butter (and a whole lot of chemistry) go a long way.

Abstract: In this work, we present gel-in-gel water-in-oil (W/O) high internal phase emulsions (HIPEs) that feature high stability by structuring both phases of the emulsion. Compared to significant advances made in oil-in-water (O/W) HIPEs, W/O HIPEs are extremely unstable and difficult to generate without introducing high concentrations of surfactants. Another main challenge is the low viscosity of both water and oil phases which promotes the instability of W/O HIPEs. Here, we demonstrate ultrastable W/O HIPEs that feature biphasic structuring, in which hydrogels are dispersed in oleogels, and self-forming, low-concentration interfacial Pickering crystals provide added stability. These W/O HIPEs exhibit high tolerance toward pH shock and destabilizing environments. In addition, this novel ultrastable gel-in-gel W/O HIPE is sustainable and made solely with natural ingredients without the addition of any synthetic stabilizers. By applying phase structuring within the HIPEs through the addition of various carrageenans and beeswax as structurants, we can increase the emulsion’s stability and viscoelastic rheological properties. The performance of these gel-in-gel W/O HIPEs holds promise for a wide range of applications. As a proof of concept, we demonstrated herein the application as a gelled delivery system that enables the co-delivery of hydrophilic and hydrophobic materials at maximized loads, demonstrating high resistance to gastrointestinal pHs and a controlled-release profile.