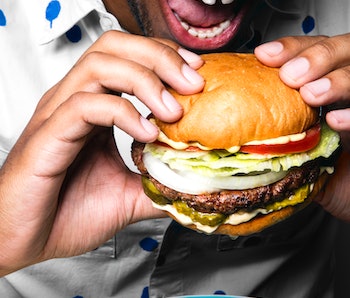 Fast food giant Burger King launched its 100-percent plant-based Impossible Whopper on April 1 in St. Louis, and the reviews are in: It’s uncannily close to the real thing. And not only in terms of taste. A close look at the Burger King nutrition information shows the Impossible Whopper has roughly the same amount of calories as the original beef-based burger.

The original Whopper is 660 calories, according to the Burger King website. Meanwhile, the Impossible Whopper is 630 calories. While it may seem counterintuitive — plants are supposed to be healthier than meat, right? — it’s important to remember that to make a plant-based burger taste like meat, it’s got to include the same molecular components. That is, lots of protein and lots of fat. For Impossible Foods, the startup that makes the Impossible Whopper (which is based on its Impossible Burger), the goal of creating a vegetable-based patty is clearly not weight loss.

Where Do All the Calories Come From?

According to the Impossible Foods website, the Impossible Burger is “made mostly of water and plant proteins with heme.” The original recipe used wheat protein; the “new recipe” used in the Impossible Whopper uses soy, which is “higher in ‘protein quality’ (a more complete selection of essential amino acids), beefier in texture, and with just a bit of dietary fiber,” the site reads. Heme is an iron-containing molecule found both in animal blood and in plants that is thought to provide a slightly metallic, “meaty” taste.

In addition to a soy-based protein source, the Impossible Burger includes coconut oil and sunflower oil, the latter of which was added to the “new recipe” to “reduce the amount of total and saturated fat.” Altogether, this new product has 30 percent less sodium and 40 percent less saturated fat than the original recipe, and it contains the same amount of protein as 80/20 ground beef from cows.

In a culture where red meat is often a target of healthy eating campaigns, it’s easy to forget that plants can produce fat, too — a lot of it. A gram of either coconut or sunflower oil contains about nine calories, and the Impossible Whopper contains 34 grams of fat. That means about half its calories are fat-derived. The rest largely come from the soy protein.

It’s not exactly healthy, but maybe that’s not really the point. Flavor molecules and lip-smacking moisture are carried in fat, which is why it’s important to include it in a dish to make it tasty. If the goal is to provide consumers with an alternative to meat that won’t make them miss the real thing, it won’t be able to do it without the fat.

Ultimately, compared to the original Whopper, the Impossible version has about 15 percent less fat. That’s not that big of a difference, but it’s understandable why. At the very least, it has 90 percent less cholesterol, since plant-derived proteins generally have less than those derived from meat.

“That said, the Impossible Burger mimics beef in calories but is free of cholesterol and contaminants associated with beef production because it’s made entirely from plants,” says Impossible Foods.

Even though it’s not really healthier, there’s one key reason a non-vegetarian might choose the Impossible Whopper over the original: It’s better for the planet. Gassy animals are an enormous source of methane, a greenhouse gas that lingers in the atmosphere. Furthermore, clearing land to house those animals requires destroying trees and overturning soil, activities that degrade much-needed carbon sinks for rising levels of carbon dioxide.

“Our new product delivers all the taste meat lovers crave — without compromise to nutrition or the planet,” said Impossible Foods chief operating officer David Lee at the International Consumer Electronics Show in January, when the “new recipe” was unveiled.

But to scale up the number of people who willingly choose plant-based burgers, and in doing so, do their part to battle climate change, the burgers have to be good. Calories and fat are the trade-off.

Regarding the Impossible Whopper, the company’s founder and former Stanford University professor Pat Brown told the New York Times: “Our whole focus is on making products that deliver everything that meat lovers care about.”

More like this
Science
7 hours ago
Look: Hidden fossils reveal a microscopic creature that may be resilient to climate change
By Jennifer Walter
Science
5.18.2022 8:00 PM
Pollution is responsible for one in six deaths each year — and it’s getting worse
By Tara Yarlagadda
Mind and Body
5.15.2022 10:30 AM
Lemon water won’t detox or energize you — but here’s what it can do
By Evangeline Mantzioris and The Conversation
Related Tags
Share: