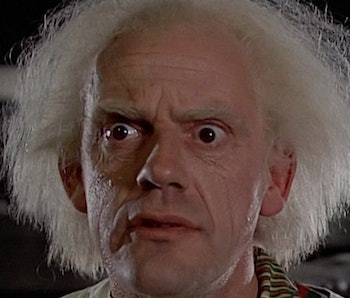 If Stranger Things Season 3 is any indication, then popular culture has finally started to critique Back to the Future’s oddities rather than revere it as an iconic sci-fi classic. As one of Season 3’s most obvious ‘80s cultural references, Back to the Future’s inclusion feels more critical than other homages we see in a series known for ‘80s nostalgia. It’s just the latest in a trend epitomized in Avengers: Endgame when Professor Hulk called the 1985 movie “bullshit.”

“I wasn’t totally focused or anything in there,” newcomer Robin says late in Stranger Things Season 3 after watching Back to the Future, “But I’m pretty sure that mom was trying to bang her son.”

Hey, we’ve all thought it.

In the penultimate episode of Season 3, Robin and Steve are still reeling from a truth serum administered by Russians in the previous episode, so they’re inhibitions are nonexistent. Dustin and Erica plop them down in the front row of a Back to the Future screening to “lay low,” but the pair skip out to drink from the water fountain and discuss the weirdest movie they’ve ever seen in one of Season 3’s best moments.

Instead of calling the character Marty McFly, Steve refers to Michael J. Fox as “Alex P. Keaton,” another ‘80s reference to Fox’s character from the series Family Ties. His inability to recall the character’s name is funny enough, but the moment is made even funnier when Steve can barely comprehend what the film’s title means. Being high off Russian truth serum must’ve made it a real challenge, but the plot isn’t the easiest to comprehend for the sober mind either.

Steve: But they’re the same age.

Robin: No, but he went back in time.

Steve: Then why is it called Back to the Future?

Robin: He has to go back to the future because he’s in the past. So, the future is actually the present, which is his time.

Like Rick and Morty and Star Wars long before it, Back to the Future sort of tried to normalize incest in 1985. That was a bit shocking for audiences then, and it’s still the moment that new viewers reel from. It’s as if, through Stranger Things, the Duffer Brothers are trying to say, “Hey, that scene is pretty weird, isn’t it?”

Comedian also John Mulaney has a great critique of Back to the Future that raises several obvious questions. Why is young Marty McFly’s best friend a disgraced physicist? Why don’t they use time travel to do something good for history rather than for Marty to make out with his mom? If they go to the past, why is it called “Back to the Future”?

Earlier this year Avengers: Endgame used time travel as a crucial plot device that allowed the Avengers to collect the Infinity Stones from throughout time so they could undo the Decimation, the event when Thanos used all six Stones to wipe out half of all living creatures.

Scott Lang (aka, Ant-Man) references Back to the Future multiple times as they’re coming up with their time heist plan. Tony Stark calls this “horseshit” and then later, Professor Hulk confirms it is indeed “bullshit”.

Is 2019 the year that Back to the Future became outdated, unwoke, and uncool? Avengers: Endgame and Stranger Things sure make it seem like that’s the case.

Stranger Things Season 3 is now available to stream only on Netflix.

Watch John Mulaney break down why Back to the Future is so weird.