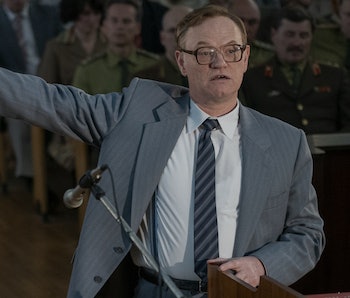 Ahead of the final episode of Chernobyl, the HBO mini-series about the 1986 nuclear disaster in Ukraine, Inverse asked Adam Higginbotham, author of Midnight in Chernobyl, a New York Times non-fiction best-seller based on a decade of interviews, to offer insight on the more memorable points of the penultimate chapter in the five-part story.

The fourth episode, “The Happiness of All Mankind” — named so for a banner that hung off a building in an evacuated village, spotted by soldiers tasked with killing the radiated dogs and cats abandoned by their owners — brings forth the irony that runs throughout Chernobyl. While the Soviet state continued to say the situation was better than the reality, “liquidators” were shooting dogs and killing plants so no one would accidentally eat them and die.

The following questions deal with Episode 4 of the TV series, which is accompanied by this excellent podcast hosted by NPR’s Peter Sagal, wherein he interviews series creator Craig Mazin about the historical reference points in his gripping piece of historical fiction.

Inverse: Did they really have trouble evacuating people, as is depicted in the opening scene where a woman is milking a cow and is forced to leave?

Adam Higginbotham: There certainly were difficulties with the evacuation in the countryside — villagers deliberately evaded the authorities or sneaked back to their homes after the evacuation was complete, which is how some elderly residents of these places in the zone remain there today.

More striking to me were the examples I discovered of people simply left behind. In Pripyat, for instance, police patrols came across elderly men and women who had been forgotten about in the rush to evacuate, sitting alone in otherwise abandoned buildings days later, waiting for someone to tell them what had happened.

We learn more about the RBMK reactor design in Episode 4, and that Valery Legasov (Jared Harris’ character) knew they were flawed. We know that is true (New York Times, 1986), but could you help us understand the importance of this moment? We learn that Legasov commits suicide in Episode 1 and this revelation (to those new to the story) in Episode 4 seems like the biggest clue as to why.

I don’t believe anyone knows why Legasov committed suicide, nor do we know the extent of his understanding of the flaws in the RBMK design before the accident. Although he was the deputy director of the Institute of Atomic Energy, he was not a reactor specialist, and indeed had to find an RBMK expert to brief him before he first got on the plane for Chernobyl on April 26.

Legasov had made one unsuccessful suicide attempt in 1987, taking an overdose of sleeping pills. But on neither occasion did he leave a note behind. Of course, we don’t yet know what reason the show gives for the character’s suicide, so there will doubtless be new revelations to come — but the reasons the real Legasov took his own life are complicated and do not fit a simple narrative.

By 1988, his health had been shattered by radiation exposure, his colleagues had ostracized him, his career had been destroyed — and he had not even been publicly recognized for his work in Chernobyl, at least partly because Gorbatchev had, early on, taken a personal dislike to him.

We know that the robot “Joker” really exists (there’s a photo), but what we learn in the episode is that Moscow lies to the West German government about the radioactivity levels on the roof — so, of course, the robot immediately dies. How accurate is this moment as an illustration of Soviet policy and culture?

I suspect the story about lying to the West German government has its origins in a video documentary available on YouTube. I was unable to corroborate it.

Bureaucratic waste and institutionalized dishonesty was, by now, endemic to the system, and the state certainly did continue to cover up the severity of the accident after it had happened — and this may have been one reason why they refused direct aid from the west, even after it was proffered. But this instance slightly stretches credulity.

“Biorobots” is the real name given to men to clear the roof of graphite. What more can you tell us about this incredibly dangerous mission to shovel heavy pieces of graphite off a roof and into a massive hole in the ground where a nuclear reactor used to be? There is documentary footage that is strikingly similar to the scenes we see in the episode, but that also leaves gaps about the mindset of these soldiers.

Given the terrible nature of their task, the men were as well prepared as they could be. A medical officer went out onto the roof first, equipped with a version of the improvised protective equipment — a rubber apron lined with lead, and pieces of lead sheet tied around his neck, groin, head, and placed inside his boots — to assess the potential dose each man would receive, and calculations made accordingly.

General Tarakanov laid out a dummy version of the debris field elsewhere so that men could rehearse their movements in relative safety. Tarakanov insists to this day that he gave each man the option to leave if he did not wish to participate — but not one refused. Each wished to do his duty to protect the motherland.

But the truth is that the troops’ roof-clearing operation was made necessary only by bureaucratic infighting and arbitrary deadlines: a method to remove the debris using giant glue pads suspended from helicopters had been successfully tested on the roofs before Tarakanov’s men went in, but the government commission refused permission to deploy them.

The actor Ralph Ineson plays General Tarakanov, and he historically gave the same motivational instructions to the “liquidators” (more than 3,000 in total) who had to clear the roof. Tarakanov comes off favorably. What was he like in history?

Tarakanov is a fascinating character — as a child, he watched his village burned to the ground by the Nazis, lied about his age to join the army, and subsequently wrote two of the Soviet armed forces’ textbooks on planned remediation in the aftermath of nuclear war.

I interviewed him at length, but only after a great struggle. He is almost a parody of a retired Soviet general: brash, egotistical, threatening. After agreeing to meet me, he waited until I had come to his office, upstairs from a travel agents’ in a crumbling building in Moscow, and sat down over tea before telling me that he wouldn’t talk unless I signed a contract and paid him. When I explained that this wouldn’t be possible, he spent an hour swearing and haranguing me in Russian before dismissing me and my translator from the room.

We returned a few days later, and he did the same thing all over again before finally relenting, “because otherwise you’ll think I’m a bad guy.” After that, we talked for hours and parted the best of friends.

When I asked if he was still in touch with any of the men who worked on the roof clearing operation, he went to his safe and retrieved a thick sheaf of dot-matrix printer paper, listing the name of every single man who went out onto the roof, their rank, the date of their work, and the description and weight of the debris they threw into the ruin of Reactor Four.

He himself took a significant dose of radiation during the liquidation, and ended up in the hospital being treated for ARS. Tarakanov remains a controversial figure among those who served in Chernobyl — some of whom have suggested that he should have refused to send men into harm’s way in the first place. Others have pointed out that the operation, despite the sacrifice made by his men, failed in its ultimate purpose, and decontamination had to be completed by other means months later.

“Egg baskets” is another real-life term given to these sort of crude, hand-made lead codpieces. We see a team of liquidators who are tasked with killing radiated animals wearing them.[^1] Can you tell us about the climate in which they became necessary? Was it just another result of an under-supplied Soviet force?

“This is a new one to me. I believe it might originate with Svetlana Alexievich, whose work I did not use as a source. Nobody I spoke to mentioned “egg baskets,” and I saw no reference to them in any of the monographs and memoirs I read about the liquidation. The pilots of the helicopters definitely lined their cabins with lead sheets and poured lead shot into the recesses in their seats designed to accommodate parachute packs.

The pilots had a rhyme about it — ““Yesli hochesh byt’ otsom/zakrivay yaitso svintsom” — which, translated, meant, “If you want to be a dad/cover your balls with lead.”

[^1]: On The Chernobyl Podcast, series creator Craig Mazin cites this piece of equipment as being from an account by a liquidator included in Voices from Chernobyl, a 2015 oral history by Svetlana Alexievich.