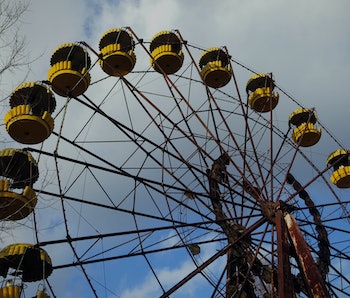 Today, on the 30th anniversary of the Chernobyl disaster, we remember an event that shook the world, changed and derailed thousands of lives, leaving deep, lasting scars on Ukraine and its people.

A number of films have endeavored to explain and examine what happened on April 26, 1986 — and what continues to happen in the aftermath. From first-person accounts of the containment efforts in the days following the meltdown of Reactor 4 to theories that suggest that Chernobyl was a crime, not an accident, documentary films have reviewed the tragic event that spurred coverups and deadly preventative measures.

Here are five powerful films that venture into Chernobyl, and give us a better, deeper and more contextualized understanding of the meltdown that effectively changed the course of history.

Winner of the Sundance Grand Jury Prize, The Russian Woodpecker approaches Chernobyl from a slightly different vantage point: through the eyes of artist Fedor Alexandrovich. Personally affected by the radiation, Alexandrovich believes that the Chernobyl disaster wasn’t simply an accident.

The Russian Woodpecker has been lauded for its wildly inventive narrative and the way in which it frames what might be an easily dismissed conspiracy theory as a very real, plausible and troubling possibility. It poses a vital, uncomfortable question: “What if Chernobyl was a crime?”

An Academy Award-winning short film from Maryann DeLeo, Chernobyl Heart takes a hard look at the aftermath of Chernobyl and, more specifically, a heart condition affecting children near the disaster zone. The stories of children and families grappling with life-threatening and fatal health problems is a reminder that Chernobyl isn’t a thing of the past.

From the filmmaker behind the Academy Award-winning Chernobyl Heart, White Horse follows Maxim Surkov as he returns to his childhood home in Pripyat for the first time since he evacuated in 1986 as a 10 year old. It’s both a personal account and an eerie, disquieting look at the abandoned city Surkov once called home.

In an interview with HBO, filmmaker Maryann DeLeo recalls the trip back to Surkov’s home, which proved to be deeply affecting and emotional, for which Surkov wasn’t entirely prepared. “He didn’t seem nervous about going back until we got into his courtyard. And then he just kind of sat there and couldn’t move.”

The Battle of Chernobyl follows the Soviet Union’s attempt to cover up and downplay the disaster and the containment efforts preventing another explosion that threatened to devastate much of Europe. Through footage and documents that became available in the ‘90s, the film examines the conditions that led to the reactor meltdown and the subsequent handling of the disaster by a government that kept its people in the dark.

This short Ukrainian documentary film consists largely of on-site footage and tells the story of the months-long containment effort following the meltdown. Told by Valeriy Starodumov, who was a part of the effort, the story reflects on the 3,828 people who risked and sacrificed their lives to clear dangerous and highly contaminated areas to avoid another, even more devastating disaster after the original meltdown of the fourth reactor.

“It was not me who had made a decision to send these men in the zone of mortal danger,” says Starodumov, “but each night, some inexplicable feeling of guilt brings me back to the past, in that first two-minute shift, which stretched out for me for a quarter of a century.”