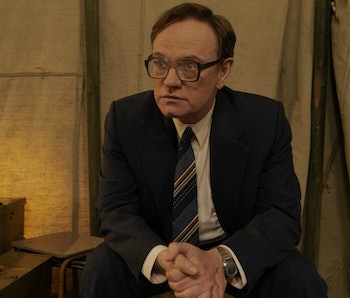 In the dramatized historical account of the Chernobyl disaster, in which a nuclear power plant in northern Ukraine exploded and might’ve wiped out Western Europe, HBO has given audiences an antidote for Game of Thrones’ underwhelming final season. The mini-series mixes history and drama with nuance, and develops its characters over episodes that are as cerebral as they are arresting. Chernobyl is very good. Watch it. There are no dragons, but there are lies, there is poison, and innocent lives are lost due to the arrogance of political leaders. The late Soviet Union was essentially the late Seven Kingdoms.

Adam Higginbotham is the author of Midnight in Chernobyl, a New York Times non-fiction best-seller that’s also rich with detail and attention to the facts. It’s a perfect complement for viewers who have a reignited fascination with Chernobyl, and for people learning of its mind-boggling catastrophe for the first time.

Inverse sent Higginbotham some common questions about Chernobyl that might give viewers pause. We also get his assessment of the series so far.

And before we go any further, you have to listen to the podcast associated with the series. Peter Sagal (host of NPR’s Wait Wait … Don’t Tell Me!) interviews series creator Craig Mazin about each episode. Mazin explains his decision-making on what’s real and what was added for reasons of narrative, drama, or character. (Here’s the Apple Podcasts link.)

Inverse: What has been your reaction to the details presented in the Chernobyl on HBO?

Higginbotham: I’ve so far enjoyed it as a piece of drama. The production design is extraordinary, and a huge amount of effort has obviously gone into getting the period details of the costumes and settings exactly right.

However, as you’ll know from reading Midnight In Chernobyl — which was the product of many years of on-the-ground reporting and research, eyewitness interviews, and access to previously unseen archival material — the show tells a story that differs significantly from the actual events.

In the three episodes I have seen, there’s a lot of fictionalization and exaggeration for dramatic effect. A good deal of the work I did on the book was made necessary by the questionable veracity of some of the existing English-language accounts of the disaster and the mythology that has developed around the accident over the last 30 years. In fact, I found that the true story was, in many cases, more unbelievable and frightening than the version presented in these old sources, which had often got things wrong or reiterated exaggerated hearsay and myth.

The HBO drama perpetuates some of these myths, but this is a TV show, so nobody’s expecting the level of veracity required for a non-fiction book.

The same holds true of the portrayals of Shcherbina and Legasov. The dialogue and the scenes used to build their personalities in the show have been made up. The characters are very broadly in line with what I know of them from talking to individuals who knew them well (I spoke to friends and colleagues of both, and to Legasov’s daughter, Inga) and from studying Legasov’s writing — but I have no evidence that any of the scenes between them in the show took place in real life.

In reality, the government commission was staffed by numerous ministers, scientists, and military officers, and deliberations took place in much larger conferences, so the real drama was larger and more complex; Legasov was not a reactor specialist but a radiochemistry expert, so he required advice and guidance from numerous other specialists — and, as you’ll see in the book, was not as clear-cut a figure as the martyred hero portrayed on TV. The real conflict was between Legasov and another senior scientist not shown so far in the show.

Inverse: Mazin dreamed up Ulana Khomyuk (played by Emily Watson) to be the intrepid, brave scientist from the Belarusian Institute for Nuclear Energy. While she didn’t exist in history, Mazin has said she’s a composite of many people — and the USSR had a higher percentage of women in STEM roles than other countries. Could you comment on the women who might have inspired her character?

Although she’s a wonderful device to guide the viewer through complex events, I’m really not sure of which scientists Emily Watson’s character might be a composite. There were several women in senior positions in the real drama who appear in Midnight In Chernobyl, but I know of no women involved at that level of the government commission.

The nuclear scientists investigating the causes of the accident were well aware of the faults of the RBMK reactor years before the accident; two male reactor specialists came down from Moscow within 36 hours of the explosion and quickly pinpointed its probable cause. In chapter 15 of my book, you’ll see that the real investigation into the causes of the disaster began almost immediately on several fronts, and was coordinated between the KGB and the state prosecutor’s office.

"There was no need for a crusading whistleblower to uncover the causes of the accident."

There was no need for a crusading whistleblower to uncover the causes of the accident, although bringing them to public light required many years of work on the part of scientists from within the Soviet nuclear industry, ultimately under a new commission headed by a man named Nikolai Steinberg.

Inverse: Let’s talk about those miners: In the series, they are seen in the nude, in extreme conditions, working to protect the water supply. How accurate is that story? And, I have to ask, were they in the nude?

Miners, engineers, and subway workers were indeed drafted in to tunnel beneath the reactor as part of a series of different efforts to control the meltdown, but perhaps not quite in the circumstances depicted. There is plenty of film and photographic footage suggesting that the miners worked clothed, not naked, and none of those I spoke to who were in or around the tunnel project at the time recalled that — although they did talk about plenty of other crazy things that did happen, of course.

In that podcast, Mazin had this to say about the miners: “They chose, willingly, to do this, out of a general sense of honor and community.”

Mazin says that the effort by the miners wasn’t necessary: “It never melted through the concrete pad, so it never got to the groundwater. It’s just a chilling fact.”

Meanwhile, about the nudity: “It was brutally hot,” Mazin says on the podcast. “It was a real oven in there, and they couldn’t use fans because it would start the [radioactive] dust.”

Inverse: Did a helicopter really crash when it was trying to drop the sand over the fire at Chernobyl?

No. The helicopter crash — that is, I assume, digitally recreated in the show — took place in early October, long after the fire-fighting was complete, and was caused by the aircraft rotor blades striking a chain or cable on one of the construction cranes being used to build the sarcophagus. You can find video footage of the crash on YouTube.

Inverse: Did Gorbatchev really give permission to kill three men who needed to venture into the radioactive plant to open a sluice gate that let water out?

Not as far as I’m aware.

Inverse: Did the three men volunteer for the role? It’s been described as apocryphal.

The three men were members of the plant staff with responsibility for that part of the power station and on shift at the time the operation began. They simply received orders by telephone from the reactor shop manager to open the valves.

The details of what’s shown in the show — diving masks, a possible several-megaton explosion — I found very gripping. But they are not true-to-life. A full account of the real operation, which was just as frightening but longer-drawn-out, is given in chapters 11 and 12 of the book.

Inverse: Anatoly Dyatlov comes off very poorly in the mini-series; was he such a terrible person for the decisions he made? What was your reaction?

Dyatlov was a complex individual, almost universally respected by the plant staff for his technical expertise while also disliked by some for his manner. His decision-making could certainly be peremptory and dictatorial, so I imagine he could have been somewhat like the character in the show.

I see him as rather more sympathetic than the Captain Bligh figure we’ve seen so far — but in the episodes I’ve seen, I don’t think we’ve yet glimpsed enough of his character to understand exactly how the show will ultimately portray him.

I’m certainly hoping there is a lot more Skarsgård-Harris in the remaining two episodes of the show. I think their scenes together are really great. More broadly, one of the chief reasons I wrote Midnight In Chernobyl was to make sure that those involved in what happened emerged as real people who had agency in events, and were not simply the familiar stereotypes of Soviet life, adrift in a gray dystopia. We’ve seen some of that sense in the show, but I’d hope for more of it in what remains.

More like this
Culture
5.19.2022 12:30 PM
Is The Staircase a true story? What the HBO show gets right and wrong
By Meg Walters
Culture
5.23.2022 1:00 PM
The cluttercore TikTok trend has a surprising connection to Victorian England
By Vanessa Brown and The Conversation
Entertainment
5.26.2022 8:07 PM
Andor trailer reveals big changes to the Star Wars universe
By Dais Johnston
Related Tags
Share: