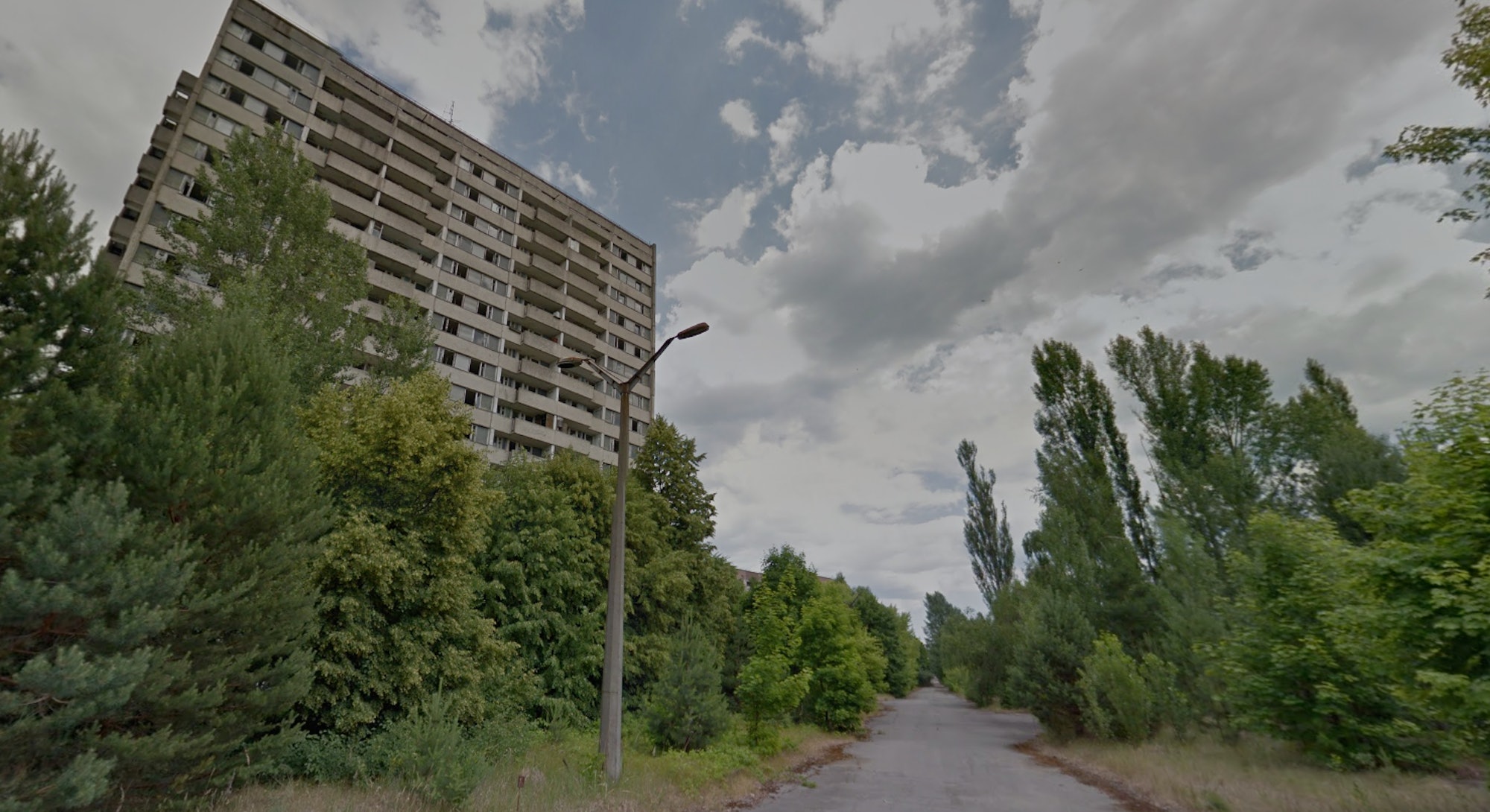 The abandoned city of Pripyat in northern Ukraine has become immortalized in video games, horror movies, and documentaries, after the nuclear disaster at the Chernobyl nuclear power plant made it a ghost town. Stepping into the city for the first time offers an eerie experience, especially in the decaying downtown center, where the floor of a now decrepit grocery store is still littered with shopping carts abandoned 30 years ago. A crumbling high-rise emblazoned with the letters, “Hotel Chernobyl” reminds you that people once flocked to this city that was a source of pride for the Soviet Union. Only two hours north of Ukraine’s capital of Kyiv, Pripyat symbolized a bold future for the USSR. Instead, many believe that what took place here triggered the last gasps of the Soviet Union.

In the heavy snowfall of a late November morning — the same day a massive containment arch was moved over Chernobyl’s nuclear reactor — the abandoned town looks like many of those in the now war-torn areas of Eastern Ukraine, commonly referred to as the Donbass. Only whereas the buildings in Donbass have been ripped apart by bullets and shelling, Chernobyl shows a slow rot. 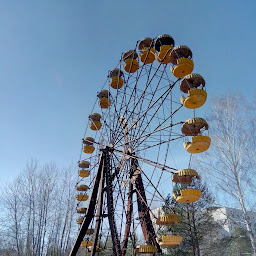 People once thrived in Pripyat. Families made their homes here. But three decades later, nature is rapidly eating away at those memories. Trees, shrubs and vines sprout throughout the downtown square and overtake the walls of every building in the town. Entering the buildings is strictly forbidden, but many do so anyway. The views from the tops are too enticing to pass up. Only from up top do you truly get a sense of just how eerily empty this place now is. It once housed nearly 50,000 people, but now only contains a smattering of tourists at any given time. You can see them walking around below, many flocking to the amusement park with its ferris wheel and bumper cars. Most tourists carry Geiger counters to measure the radioactivity of their surroundings. Sometimes it’s relatively low, but other times the counters can light up and remind you of just where you are. Apart from the obvious withering away of the structures of Pripyat, the thing that sticks with most people is the silence.

Will this place ever be livable again?

Although about 1,000 stubborn elderly Ukrainians chose to move back after the disaster, only around 100 now remain. “It is probably never going to be a residential area in the foreseeable future,” Vince Novak, the Director of Nuclear Safety at the European Bank of Reconstruction and Development, tells Inverse. “But it will certainly be possible to work in the exclusion zone. That being said, I would not advise you to walk through the forests around the Chernobyl site.”

One reason not to go into the woods is that the area around Chernobyl has been taken over by wildlife, including radioactive wolves popularized in a 2011 PBS documentary.

In fact, earlier this year the government of Ukraine announced its intention to invest around 1 billion euros to turn the exclusion zone, an area the size of a Rhode Island, into a giant solar farm. Any move toward large-scale economic projects in the area would be a great step up from the current market in Chernobyl, which largely revolves around illegal logging.

The containment arch slides into place.

The only other game in town right now is the astronomically expensive and enormous new safety confinement (NSC), one of the most ambitious projects in the history of engineering. At 79 million pounds and 295 yards wide, it’s the result of 25 years of planning, preparation, and execution involving more than 25 countries and financing from 46 donor governments. It slid into place on November 29.

Nicolas Caille, the Project Director of Novarka, a French contractor leading the effort boasted to us that 10,000 men and women concentrated their lives on this project and invested a total of 25 million hours of work without an accident. Considering the risks involved, many of the workers we spoke to felt that achievement outweighs the building of the NSC itself.

The shelter has been designed to last 100 years. By that time, it’s expected that the Ukrainian government alongside a bevy of contractors will have removed and disposed of the radioactive waste still contained within the existing shelter. Over the years, the various pieces of radioactive trash that have been pulled from Chernobyl have astounded those working on the site says Novak.

“You will not believe what we dug out when the foundations for the new safety confinement were prepared,” he says. “From radioactive materials to ammunition, arms, trucks, cranes. All of that stuff was buried there in the immediate aftermath of the accident.”

And Novak says there’s even a rumor that someone managed to steal a helicopter from the old site, which was not in use, but nevertheless slightly contaminated. The story goes that whoever stole it used it to open a coffee shop somewhere in Ukraine. After some digging, it seems the rest of that story remains shrouded from the public.

Novak’s colleague, and the first Western official to inspect Chernobyl in the aftermath was the legendary Hans Blix, the Swedish diplomat who headed the International Atomic Energy Agency from 1981 to 1997. Now 30 years later, Blix looks out on at the shelter during on a bitterly cold late November afternoon.

“Not long after it happened, I was in a helicopter flying over the reactor right next to where were sitting now,” Blix tells Inverse. “I never envisioned this type of structure at that time. It was inconceivable then. My only thought was ‘what a horrible tragedy this is.’ Here was this black smoke coming up from the graphite that was burning, and I began questioning how the IAEA could help.”

Blix, now 88, told Inverse that he realized beyond the obvious need to assemble experts to understand the situation, his most important role would be to deliver objective information about the accident to the world. At a time when Cold War propaganda was heavy and the Soviets didnt want to divulge much, it was crucial to have a non-state voice like the IAEA to disseminate the truth.

Despite the tragedy, Blix feels that the world was able to learn from Chernobyl because it quickly mobilized huge conferences with nuclear experts from all around the world, and began unprecedented information sharing amongst the nuclear powers. “They came together and they learned and they’ve gone on to learn so much more over the decades now. So much has been learned from this, as was learned from Three Mile Island and Fukushima.”

Many who managed the wake of the ‘86 catastrophe are in the later years of their lives now. As Novak says, “This shelter may very well come to stand as a 21st century monument symbolizing what humans can achieve when things go wrong.”