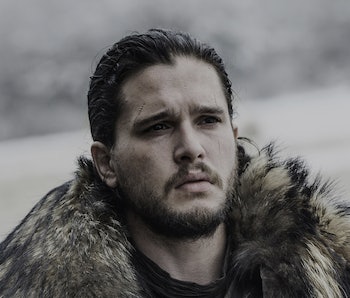 The Game of Thrones finale might have ended on a slightly unsatisfactory note, but the final shot actually teased a possible future beyond Season 8 by referencing the HBO show’s very first episode. An Easter egg spotted in Game of Thrones Season 8, Episode 6 brings the series full circle in a very interesting way.

Warning: Spoilers for the Game of Thrones finale ahead.

At the very end of Game of Thrones (after Dany dies, Bran becomes king, Sansa frees the North, and Arya travels west to discover … America?), the series ends on a shot of Jon Snow heading North beyond the Wall once again with Ghost, Tormund, and a whole bunch of Wildlings.

Beyond the fact that Jon’s basically already broken his promise to live out a life of stoic celibacy with the Night’s Watch, that final scene also perfectly parallels the very first moment in Game of Thrones Season 1, Episode 1.

This GoT Easter egg was spotted by redditor u/Iuri_N:

What does this mean? Well, for one thing, it’s a nice bit of symmetry, bookending Game of Thrones exactly where it began. Of course, if you remember what happened in that Season 1, Episode 1 scene, you probably know where I’m going next: White Walkers.

Back in the Season 1 opener, a group of Night’s Watch rangers head beyond the Wall. They soon discover a bunch of dead body parts laid out in the snow in the shape of a symbol (not the spiral, but another symbol taken from the Children of the Forest). The group argues over what could have caused this Wildling massacre (“They’re savages.”) before an actual White Walker shows up and starts chopping off heads.

Fast forward 70 episodes and history may repeat itself. Again, a group is venturing beyond the Wall. As far as we know, the White Walkers are extinct, but considering how little Game of Thrones did to really explain them, anything’s possible. Maybe the Night King can resurrect himself? Maybe the magic that created him simply transferred to another host? Anything’s possible.

Unfortunately, the Game of Thrones finale plays it as safe as possible and avoids ending on a cliffhanger. There’s no final shot of the Night King’s bright blue eyes or of Jon Snow wandering across a spiral freshly carved into the side of a tree. Instead, viewers will simply have to imagine what happens next, but this clever Easter egg does a pretty good job of connecting that initial thrilling scene to the show’s final moment.

Game of Thrones is over, but spinoffs are coming…