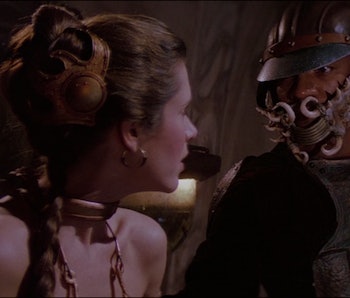 A few weeks back, Mark Hamill created a disturbance in the Twitter-Force by sharing a photoshopped image of the sequel-era older versions of Luke Skywalker, Han Solo, and Lando Calrissian all hanging out together in the cockpit of the Millennium Falcon. Some fans chided Hamill for being over nostalgic, but the image does summon an interesting question: If we know this kind of reunion won’t happen in The Rise of Skywalker , which other reunions will?

Though Hamill’s tweet contained the hashtag #MissedOpportunities and the image itself had the words “what should have been” on the Star Wars logo, it’s hard to say really imagine a version of the sequel trilogy where the focus of the films was on the older characters. For fans of the Star Trek films, this kind of thing got a little embarrassing as the original cast got older, and sort of made it impossible for a larger audience to connect to some of the later films. Similarly, Luke, Leia, Han, and Lando are all part of the older generation in the new films, meaning, a giant nostalgia-party with all them going on a mission together would have been cheesy. The sequels have been wise to split them up.

Still, one understands why Hamill got misty seeing this image, and anyone with a heart would, too.

But what about reunions that make logical sense with what could actually happen in Episode IX — The Rise of Skywalker? Right now, in no particular order, here are the five reunions that seem legitimately possible.

In the final moments of Return of the Jedi we saw both Yoda and Obi-Wan’s spirits smiling at Luke and the gang. For generations of fans, this image was the lasting idea which concluded the Star Wars saga. Now that The Rise of Skywalker is “really” going to conclude the Skywalker story, it makes sense to circle back and see what everyone’s two favorite Jedi masters are doing in the afterlife. In more than one way, the sequel trilogy has already teased the possibility of seeing Obi-Wan and Yoda hang out again. Obviously, Yoda’s ghost was a huge part of The Last Jedi, but in The Force Awakens, Obi-Wan Kenobi spoke to Rey through the Force. Famously, J.J. Abrams used a clip of Alec Guinness that was edited to say “Rey!” And, Ewan McGregor recorded the line “these are your first steps.” So, basically, if Ewan McGregor doesn’t show up as Obi-Wan’s ghost, it will be a true missed opportunity, rather than an imagined one.

Perhaps more iconic than any other two characters, the droid duo of R2-D2 and C-3PO is what defines the artifice through which the story of Star Wars is told. Though R2 and C-3PO get separated a fair amount in both the prequel and classic trilogies, they’ve shared very little screen time in the sequel films. R2 was in a coma for most of The Force Awakens. And in The Last Jedi, C-3PO was barely in the movie. Clearly, The Rise of Skywalker has to get these two wacky droids back together.

3. Darth Vader and the Emperor

This one is a little trickier, but it feels very possible. With the confusing surprise that Emperor Palpatine is returning in some way, shape or form in The Rise of Skywalker, it kind of makes sense that we’d see Darth Vader again, too. This isn’t to say the newly resurrected Palps will talk to Vader’s ghost (he could? maybe?) but what feels more likely is that we’ll get a Darth Vader and Emperor flashback. It was only a few years ago in 2016, when Vader returned for Rogue One, meaning it’s totally possible he’ll hang out with his old boss in The Rise of Skywalker, even as a memory.

While it seems really likely Rey will meet Maz Kanata again, the more interesting reunion would be between Leia and Maz. How could this happen you might ask? Well, if you think all the way back to 2015, you might remember that some of the trailers for The Force Awakens had Maz handing Luke’s lightsaber to Leia. In the movie, this never happened, but that means there are deleted scenes between Leia and Maz that could totally be reused in a different context. Plus, The Forces of Destiny cartoons totally revealed that Leia and Maz have known each other for a long, long time.

This is the big one. If you’ve been following certain rumors online, it’s possible you’ve already stumbled upon the idea that some people think Luke’s spirit will force Kylo Ren to confront a kind of “Force memory” of Han Solo. This means that there could totally be a scene in which Han and Luke “meet” again, even though both of them are dead. In a sense, this would be the perfect way for Han and Luke to be reunited because of their excellent gallows humor scenes in Return of the Jedi. “You’re gonna die here, you know…convenient,” Han told Luke. Well, now they’re both dead which makes it even more convenient for them to hang out again.

Star Wars: Episode IX — The Rise of Skywalker is out everywhere on December 20, 2019.