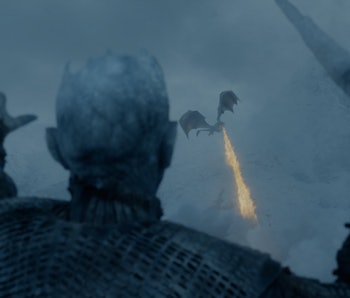 We’ve never seen more than one White Walker in action at once on Game of Thrones, but that’s about the chance. When the Great Battle of Winterfell begins in Season 8, Episode 3, a whole squad of White Walkers will attack wielding the magical ice weapons, that, if we’re being honest look a lot like oversized icicles.

“We used to see them hanging off rocky glaciers in Iceland with the most beautiful shapes,” he says. “We were always taking photographs of these natural ice growths. A lot of making the weapons came down to layers and layers of shards.”

Map: Here’s where all your favorite characters will be during the Great Battle of Winterfell.

Of course, these weapons have evolved over the years. We’ve already seen White Walkers wielding over-sized icy spears and swords, and we may see new weapon types in Game of Thrones Season 8. HBO is clearly going all out for the final six episodes, as evidenced by the variety of new dragonglass weapons we’ve already seen.

Back in Season 1, however, designing and building the first White Walker weapons was a “nerve-wracking” experience, mostly because Dunne used a brittle resin. By Season 2, he found a better solution, just in time for the show’s first close-up look at a White Walker.

“In the first seasons, we were quite limited because the materials were very scarce,” Dunne says.

He and his team took a clear resin block and knapped it out, essentially sheering off thin, shard-like layers. Those were then stacked together to create a scale-like design Dunne likened to fish or dragon scales, all in the shape of swords and spears.

“You have that feeling of shards of ice overlapping each other to a point, and that could create that ice sword shape,” Dunne says. But the process was far from over.

“Once we did all that, we put that into a silicon mold, and then used a certain resin with a hardener in it,” he says.

Dunne calls that initial experience a “nightmare,” mainly because the end product was far more brittle than they needed. After all, these magical ice swords are supposed to shatter normal steel on impact, when the opposite was far more likely to happen on camera. To fix that problem, they had to bake it.

“We had to make an oven that was long enough for it in a cylindrical shape,” Dunne said. “We then baked it for five or six hours at 180 degrees Celsius.” Even then, it was still brittle and might break if it fell over the wrong way.

By Season 2, Dunne discovered a kind of translucent rubber and applied the same exact process, knapping pieces and then rebuilding blades with a scale-like design. The weapons came out lighter and much more durable, making them ideal for stunt combat. Once they got the process down for this new style of icicle blades, it became easier and easier to develop more complex weapons, like the Night King’s panabas blade Dunne described as “like a hockey stick” to Entertainment Weekly.

And who can forget the sleek ice spear that took down Viserion towards the end of Season 7? Now that the White Walkers are back in action in Season 8, Episode 3 we’re bound to see new variations on these weapons. Will the Night King wield his panabas blade from atop the undead ice dragon Viserion? Or will he not even show up to the battle? We’ll find out Sunday.