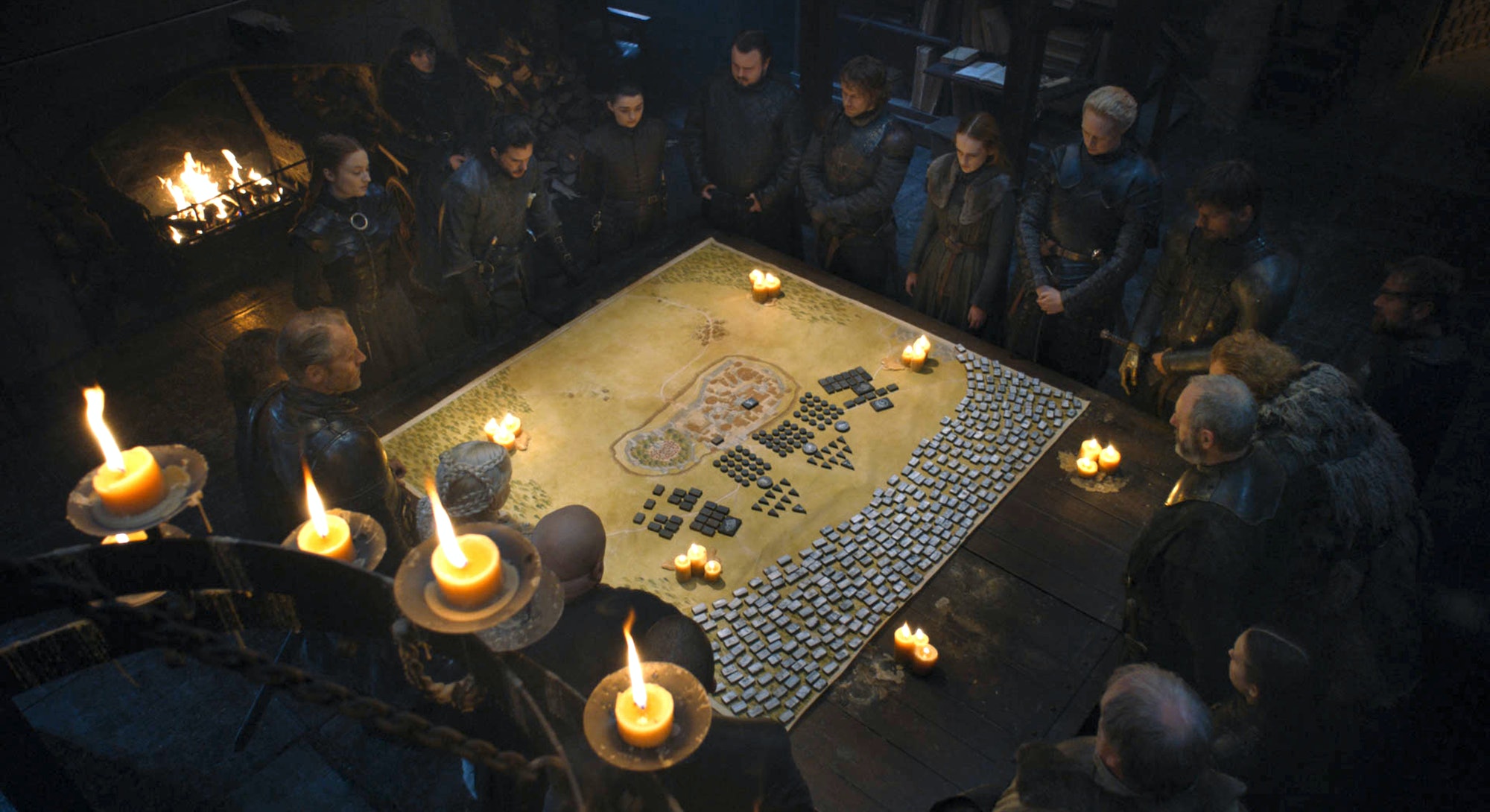 It’s not wise to discuss military strategy ahead of a big battle, but the next Game of Thrones episode brings together more characters than we’ve ever seen in a single place to fight the longest cinematic battle in television history. Do you have any idea what Tormund’s job is during this fight? Where will Tyrion be? What vital role will Ser Davos play? Perhaps more importantly, what’s their strategy for a battle in which they’re vastly outnumbered?

In the first two Season 8 episodes, we saw various kinds of preparations being made for the upcoming battle. Hundreds of spikes were stuck into the ground surrounding the walls of Winterfell, and a massive trench was also dug. Their plan is to light fires in those trenches when the army of the dead gets close enough. All of the ground soldiers were outfitted with dragonglass weapons, or in very few cases, major characters have Valyrian steel swords. Women, children, and a few other people will hide in the crypts for safety.

Many of the specific tactics and tricks haven’t been revealed quite yet, but based on an inside look at the production from Entertainment Weekly, it seems like the episode will follow its many characters very closely. Because we have at least one named character in each major position, it will offer a totally new examination of warfare that we haven’t really seen before, certainly not on this show.

Here’s where everyone is going to be during the Great Battle of Winterfell and what role they’ll play — at least initially. Things are going to go terribly for everyone involved, and we reckon the heroes will have to move around quite a bit as they struggle to survive the night.

Explore our exclusive map of every major character’s location during the Great Battle of Winterfell, and read on for a detailed breakdown of what everyone will be doing when the White Walkers attack.

See a full-size, 3.3 MB version of the map right here.

Where Are Brienne of Tarth and Jaime Lannister During the Battle of Winterfell?

In Episode 2, Jaime volunteered to serve under Brienne’s command, noting that she’s leading “the left flank.” Their regiment is the furthest west. In the above image, you can see them fighting alongside the Knights of the Vale. It appears that rather quickly, these separate groups will have to mingle to defend themselves.

In other scenes, Jaime and Brienne are seen fighting with flames all around them, so they probably survive at least long enough to retreat closer to the city walls.

Where Is Grey Worm During the Battle of Winterfell?

Daenerys’ forces make up the bulk of Winterfell’s defense, with the Dothraki in the vanguard. (The Dothraki will be the first to die.) Once the Night King’s armies advance, they’ll proceed directly through the Unsullied front-and-center. Grey Worm will be on the field with his brethren.

Where Is Tormund During the Battle of Winterfell?

Based on what we see at the war table, and where various people are heading into preparation for the battle, it seems like the Wildlings at Winterfell gather at the right flank on the eastern side of the battlefield, and they’re technically classified under the House Stark sigil.

Where Are Jorah Mormont and Lyanna Mormont During the Battle of Winterfell?

Right before Samwell Tarly gave Jorah Mormont Heartsbane in Episode 2, Jorah had been trying to get his cousin, Lyanna Mormont, to not fight in the battle. She insisted she fight alongside her men. On the war table, there’s a token within the city walls with the House Mormont sigil, which means that Lyanna will lead a small contingent of Bear Island warriors in a defensive position. If any dead make it past the gates, they’ll encounter this group.

It’s unclear if Jorah will remain with his House, but in some trailers, he’s outside the city walls on horseback. As such, he might remain to help lead Daenerys’ troops.

Where Are Beric Dondarrion and the Hound During the Battle of Winterfell?

Last we saw of Beric and the Hound, they were hanging out on the castle walls drinking. Their role in the battle hasn’t been clearly stated yet, but it seems likely they might remain up there, or they’ll be on the field, perhaps in the right flank? In the Episode 2 teaser, they both proceed cautiously through an interior hallway, so no matter what happens, they wind up somewhere inside Winterfell.

Where Is Gendry During the Battle of Winterfell?

We have no idea where Winterfell’s blacksmith goes once the fighting starts, but Gendry’s proven himself a capable fighter on more than one occasion. He’ll probably stick close to Ser Davos during the battle.

Where Is Davos Seaworth During the Battle of Winterfell?

At the war table, we learned that Ser Davos will give the signal to light the trench. A section of the grounds outside the walls has been dug out and filled with flammable materials. Once the dead get close enough, their plan is to light the trench and burn as many as they can.

Where Is Samwell Tarly During the Battle of Winterfell?

We’re not entirely sure what role Sam will play in the battle, but he definitely won’t be on the front lines. In all likelihood, he’ll be on the walls with Davos or staying close to Gilly where he can protect them. Entertainment Weekly reports that he does do a bit of fighting during the battle, but hopefully it’s not too much.

Where Are Tyrion Lannister and Varys During the Battle of Winterfell?

As commanded by Daenerys, Tyrion was forced to hide in the crypts “where it’s safe” with everyone who can’t fight. Gilly will also be there, along with the young scarred girl that Davos encountered in Episode 2. Sansa might also wind up in the crypts before the episode ends.

Where Are Arya Stark and Sansa Stark During the Battle of Winterfell?

At least initially, it looks like Arya and Sansa Stark start the battle on the battlements, and Sansa looks terrified. If we had to guess, Arya will spend the battle protecting her sister.

But recall back to the Season 8 trailer when we see her running through Winterfell (either the castle or the crypts, we’re not sure). That definitely suggests she’ll head back into the castle at some point, possibly when the wights break through Winterfell’s defenses or the Night King uses his powers to turn all the dead Starks in the crypts into reanimated zombies.

Where Are Bran Stark and Theon Greyjoy During the Battle of Winterfell?

The entire plan hinges on having Bran Stark wait for the Night King in the godswood by the weirwood tree. Inside the castle gates, this somewhat remote area is on the eastern side of Winterfell. Unless the wall is breached, the only way for the Night King to reach it would be by flying Viserion directly there.

Theon Greyjoy volunteered to protect Bran with his small group of Ironborn soldiers, so they’ll be stealthily lying low, ready to get roasted by Viserion. In the episode’s teaser, Theon aims a flaming arrow at something, but is it a wight or something much worse?

Where Are Jon Snow and Daenerys Targaryen During the Battle of Winterfell?

Jon Snow’s plan is to be close enough to Bran to protect him but not so close that they’d dissuade the Night King from advancing. Based on the above image, it seems like they fly Drogon and Rhaegal several miles northwest of Winterfell and wait. In other images, Jon seems like he’s in the thick of battle, charging towards something in the godswood.

Do he and Dany rush into the fray prematurely? Do they separate? Does Daenerys get killed in the battle and their emerging feud becomes completely pointless?