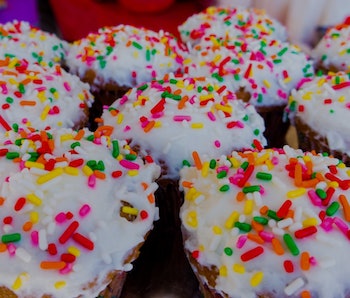 Even the most sanctimonious dieters occasionally succumb to the urge to overeat, which seems to have a deep-seated home in our brains. While overeating to the point of nausea both feels bad in the short term and can have harmful long-term effects, a new study from Deakin University in Australia suggests that the body can adjust to short-term overeating — but only a certain kind.

When scientists look into the effects of binge eating, they focus on a few primary concerns. Weight gain is certainly one of them, but blood glucose level, which the new American Journal of Physiology-Endocrinology and Metabolism study is concerned with, is also extremely important. There is past evidence showing that even short periods of overeating can upset the body’s delicate balance of blood glucose, which can lead to metabolic diseases like diabetes over time.

The data presented in the new paper may seem surprising: The scientists found that eating 1,000 extra calories per day didn’t have striking effects on weight gain and, crucially, insulin processing in a small sample of eight men. The team chalks this effect up to tiny changes that helped their body adapt in the short term.

The team noticed very small changes in the way the participants’ bodies processed insulin, the hormone that tells cells to take in glucose, keeping the amount of glucose in the bloodstream in check. Directly after the big meals, the team noted “modest” insulinemia and glycemia — an increase of those compounds in the blood — which meant that the body was using up the rapid influx of extra glucose a higher rates that it usually would. These spikes, they add, were still within a “normal healthy’ range.”

Over the course of 28 days, measures of glucose flux remained unchanged — that is, they weren’t spiking like crazy the way one might expect after eating massive amounts of food. According to the authors, these increases suggest that when we overeat in the short term, this slight uptick in the glucose and insulin response was useful for “increasing glucose disposal,” which helps keep the level of blood glucose in check.

These findings fly in the face of many previous overeating studies, which showed the short-term, harmful effects of overeating on glucose processing. In the paper, the team posits why their results differ from the rest: The types of calories consumed by their participants were different to those in previous studies on the dangers of overeating.

The authors painstakingly kept their participants on an “energy maintenance” diet of 55 percent carbohydrates, 30 percent fats and 15 percent proteins, which they say is typical of Australians. Then, they had each person consume an extra 1,000 calories worth of snacks per day, usually chips, chocolate, and meal replacement shakes. Crucially, those extra 1,000 calories could also roughly be broken down into the same proportions as the diet (53 percent carbohydrate, 32 percent fat and 15 percent protein, respectively).

"The overfeeding model used in this study is likely more indicative of the human condition that leads weight gain."

Earlier overfeeding experiments that showed more drastic changes in glucose regulation and weight in relation to overeating tend to “alter the composition of macronutrients” and greatly increase the amount of fat in the new diet, the authors note. They make the case that this reliance on fat as the external source of calories may have skewed the data in other experiments.

That’s important for two reasons: First, it suggests that the combination of fats, carbohydrates, and proteins that make up all of those extra calories can go a long way to determining how harmful they actually are. Secondly, and perhaps more importantly, most humans generally binge in a more balanced way — not solely fat-based foods — and so their study design may be a more accurate way to study overeating in the future.

“In conclusion, the overfeeding model used in this study is likely more indicative of the human condition that leads weight gain, as opposed to the high-fat overfeeding models which produce larger effect size,” they write.

Like many feeding studies, this one is small. But it points to a crucial point: not all overeating is created equal. And now, as future studies look to build upon these results they may have a more realistic overeating model to turn to to illuminate more about how it impacts health.

Abstract: Currently, it is unclear whether short-term overfeeding in healthy people significantly affects postprandial glucose regulation, as most human overfeeding studies have utilized induced experimental conditions such as the euglycemic-hyperinsulinemic clamp technique to assess glucoregulation. The aim of this study was to quantify glucose fluxes (rates of meal glucose appearance (Ra), disposal (Rd) and endogenous glucose production (EGP)) in response to 5 and 28 days of overfeeding (+45% energy) while maintaining the habitual diet’s macronutrient composition (31.0 ± 1.9 % fat; 48.6 ± 2.2 % carbohydrate; 16.7 ± 1.4 % protein). To achieve this, meal tolerance testing was combined with the triple-stable isotope glucose tracer approach. Visceral adipose volume increased by ~15% with 5 days of overfeeding while there was no further change at 28 days. In contrast, body mass (+1.6kg) and fat mass (+1.3kg) were only significantly increased after 28 days of overfeeding. Fasting EGP, Rd and insulin were increased at 5, but unchanged after 28 days. Postprandial glucose and insulin responses were unaltered by 5 days of overfeeding, but were modestly increased after 28 days (P<0.05), while both meal Ra and glucose Rd were significantly increased after both 5 and 28 days (P<0.05). Despite this, overfeeding did not lead to alterations to postprandial EGP suppression. Thus, in contrast to findings from euglycemic-hyperinsulinemic clamp studies, chronic overfeeding did not affect the ability to suppress EGP or stimulate Rd under postprandial conditions. Rather, glucose flux was appropriately maintained following 28 days of overfeeding through modest increases in postprandial glycemia and insulinemia.