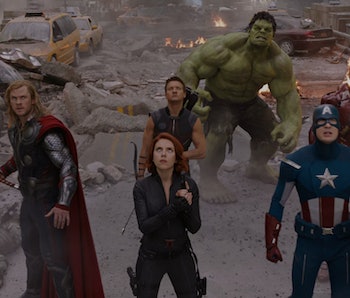 Avengers: Endgame is finally here, and with it come some major deaths and farewells in the Marvel Cinematic Universe. Not only is this movie the culmination of an 11-year and 22-movie saga, it also marks the end of several multi-movie contracts for some of Marvel’s biggest movie stars. So who lives and who dies in Avengers: Endgame? Let’s get into some spoilers!

Read on for a breakdown of how Avengers: Endgame ends for each of the original six Avengers: Tony Stark/Iron Man, Steve Rogers/Captain America, Bruce Banner/Hulk, Natasha Romanoff/Black Widow, Clint Barton/Hawkeye, and Thor.

Subscribe for free to Multiverse and get all the latest news from the geek universe delivered straight to your inbox twice each week.

By now, this should go without saying, but: HUGE SPOILERS AHEAD.

Bad news Iron Man fans, your fave is dead. That’s right, Tony Stark dies at the end of Avengers: Endgame after stealing the Infinity Stones back from Thanos and using them to wipe out the Mad Titan and his entire army with a single Snap. The gamma radiation released when he uses the stones is what kills Tony, and he pretty much dies right there on the spot.

Thankfully, Tony gets a powerful sendoff with a funeral that takes up most of Avengers: Endgame’s epilogue. Rest in peace Iron Man … at least until Marvel decides to bring the hero back in a few years.

Steve Rogers doesn’t die, but that doesn’t mean we’ll see him again in Avengers 5. Instead, Steve Rogers decides to go back in time once more (yes, there’s time travel in Avengers: Endgame) and marry the love of his life: Peggy Carter.

But that doesn’t mean Captain America is gone. Moments after Rogers travels back in time, an elderly version of the character shows up to say goodbye. After starting fresh in the past and living a full life (he’s wearing a wedding ring!), Rogers hands his iconic shield over to Sam Wilson (Falcon), essentially naming him the new Captain America.

Early on in Avengers: Endgame we meet “Professor Hulk,” a new version of the character that fuses Hulk’s strength and green body with Banner’s intellect. By the end of the movie, the only thing that’s changed is that one of Hulk’s arms is damaged from using the Infinity Gauntlet to undo the Snap.

It’s unclear where Bruce Banner will turn up next, but Mark Ruffalo is still on the hook for at least one more movie post-Endgame. So we’ll definitely see him again before too long.

Black Widow makes the ultimate sacrifice in Avengers: Endgame, flinging herself off that cliff in Vormir so the Avengers can get the Soul Stone and use it to undo the Snap. It’s a powerful moment only slightly tarnished by some mediocre acting from Scarlett Johansson and Jeremy Renner.

The big question, of course, is what this means for that rumored Black Widow movie that Marvel is clearly planning for the next phase of the MCU. Now that Natasha is dead, it seems likely this will be an origin story set before any of her previous movie appearances, which lines up with earlier reports.

Clint loses everything in the first scene of Avengers: Endgame when his entire family turns to dust in the Snap. Thankfully, he survives the rest of the movie to reunite with his wife and kids once the Avengers finally undo Thanos’ Decimation.

That’s right Hawkeye fans, your boy is doing just fine. You’ll see him again in the Hawkeye show on Disney+.

Thor goes through one of the biggest transformations in Avengers: Endgame, and we mean that literally. After failing to stop Thanos in Infinity War and then failing again at the beginning of Endgame, he retires to a shack in New Asgard (somewhere in Europe) where he can drink beer, eat pizza, and play Fortnite with his friends from Thor: Ragnarok.

By the time Rocket and Hulk set out to recruit Thor he’s an overweight mess, but he eventually comes around thanks to a pep talk from his dead mom (because time travel) and gets his mojo back. After the dust settles, Thor decides to leave New Asgard and join up with the Guardians of the Galaxy, which should make for a very interesting movie …

Avengers: Endgame is in theaters now.