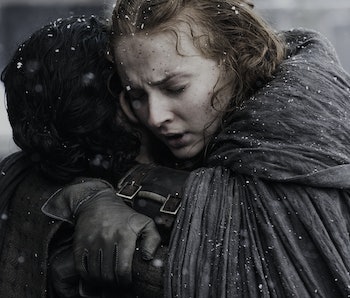 Now that Game of Thrones is coming to an end, Season 8 will have to revisit many of the various relationships that the show has established over the years. Starting with Episode 1 of the final season, we can expect some big emotional reunions that will pay off major moments set up all the way back in Season 1.

Remember how Ned Stark promised Jon Snow, “The next time we see each other, we’ll talk about your mother. I promise.” By the end of Season 1, Ned was beheaded by King Joffrey, kicking off the series of torments Game of Thrones has given us over the years. That’s one reunion dashed, but Season 8 has many more to get hyped about.

The Season 7 finale, “The Dragon and the Wolf,” brought together almost every big political player in Westeros to discuss an upcoming alliance against the Night King in the Great War, and as part of that, we saw a number of reunions that varied from amusing and absolutely exciting to quite touching. Season 8 will feature so many more.

Here are 10 Game of Thrones reunions to look forward to in Season 8, starting with Episode 1.

10. Tormund Giantsbane and Brienne of Tarth

An unscripted flirtation eventually led to one of the greatest romance stories in Game of Thrones between Tormund Giantsbane and Brienne of Tarth. The former remains one of the most unintentionally hilarious characters in the whole series, and the latter, a tall and powerful female warrior who seemingly disregards all thoughts of romance. As such, their dynamic is a total delight.

In “Beyond the Wall,” Tormund expressed interest in having children with Brienne, so he seems pretty serious about the whole thing. Here’s to hoping Tormund avoids the Night King’s armies long enough to make it back down to Winterfell so can can be reunited with his lady love.

One of the most important reunions on the show, narratively speaking, has little to no emotionality behind it, thanks in no small part to Bran Stark having been transformed into the new Three-Eyed Raven. The final note of Season 7 had Bran and Sam Tarly come to the mutual realization that not only was Jon the son of Rhaegar Targaryen and Lyanna Stark, but that his parents were wed in a secret ceremony, making Jon the true heir to the Iron Throne.

The last time Jon saw his brother cousin, Bran was unconscious in bed, having been pushed from a tower in Winterfell. Jon was leaving with their uncle Benjen to go join the Night’s Watch. In Season 4, Bran saw Jon from afar, but they weren’t actually reunited. For Season 8, what might their reunion look and feel like now that Bran has changed completely?

We have to assume that Bran will tell Jon he’s actually a Targaryen and a legitimate heir to the Iron Throne, which could set up a whole bunch of new conflicts in Game of Thrones Season 8.

8. Jaime Lannister and Brienne of Tarth

Jaime was once the most despicable character on the show, but his time spent traveling with Brienne towards King’s Landing in Seasons 2 and 3 softened his heart and set him on a path towards redemption. Their mutual respect has bordered on romantic at times, and even if it never becomes that, they’re bond remains important. Brienne’s comments about honor and loyalty at the end of Season 7 probably played a big part in Jaime’s decision to ride North to help fight alongside Jon Snow rather than remain loyal to Cersei.

Also, remember that these two each carry one of the Valyrian steel swords reforged from Ned Stark’s greatsword Ice. Brienne has Oathkeeper and Jaime has Widow’s Wail.

In more ways than one, Brienne will be very happy to see Jaime when he reaches Winterfell.

Perhaps the most contentious yet interesting reunions on this list hearken all the way back to the end of the Game of Thrones’ pilot episode. Bran Stark climbed a tower in Winterfell and saw Jaime and Cersei Lannister having sex, prompting Jaime to attempt killing the boy. Since then, Bran Stark has been crippled from the waist down.

Season 8 Jaime has all but completely redeemed himself, but when he does make it to Winterfell, it’s going to make for one awkward encounter — especially because Bran is now the Three-Eyed Raven and has such a different personality.

Remember when these two were married in Season 3? They never consummated their marriage, effectively making it null and void in Westeros, but they did develop some semblance of affection for one another. Following Joffrey’s death at the Purple Wedding in Season 4, both of them were smuggled out of King’s Landing in different ways, leading the two characters to wildly different places.

How will they treat one another when they reunite in Winterfell early in Season 8? Expect a few jokes about their nonexistent marriage at the very least.

Melisandre is one of the few remaining names on Arya’s list precisely because of Arya’s affection for Gendry. In Season 3, Melisandre bought Gendry from the Brotherhood Without Banners so she could perform some dark magic with his “king’s blood.” A lot has changed after five seasons, but when Gendry returns to Winterfell, you can bet he’ll refer to Arya as “my lady” during their tender reunion. Do they have a romance? Or is it just companionship?

If these two were to marry, it would make for the union of the Baratheon and Stark houses that Robert Baratheon once dreamed of — and under much more authentic circumstances than Joffrey marrying Sansa. But is marriage something Arya even wants? If it is, then Gendry may be the one for her.

Two of the very best friends in all of Westeros haven’t seen one another since Season 5. Sam left Castle Black to train as a maester shortly before mutineers stabbed Jon Snow to death in the season finale. Even without Sam and Bran Stark’s mutual realization regarding Jon Snow’s lineage, these two will have a lot to catch up on since Sam is the only other person besides Bran who knows that Jon is actually a Targaryen.

Were Jon Snow to become king one day, there’s little doubt he would find a way to make Sam the Hand of the King. As it stands, Sam will probably become a trusted advisor to Jon in the Great War.

3. Arya Stark and the Hound

Sandor “the Hound” Clegane was once on Arya’s infamous list of people she wanted to murder, but leaving him for dead following a fight with Brienne seemingly removed him from that list. Arya and the Hound spent a stretch of time in Seasons 3 and 4 traveling together. (Clegane technically kidnapped her and hoped to ransom her to several people to no avail.) In spite of Arya’s bloodlust and the Hound’s ill intentions, the charming bond that formed between them left a lasting impression.

The Hound spoke fondly of Arya in the Season 7 finale, which bodes well for their inevitable reunion when the Hound returns to Winterfell early in Season 8. When asked about Arya’s feelings towards the Hound in an official HBO blog post, actress Maisie Williams said, “I don’t think there’s any hard feelings anymore.” Perhaps the two might fight side-by-side in the war to come?

2. The Hound and the Mountain

Perhaps the single most hyped one-on-one battle in the history of the show, Cleganebowl is the fan name given to a battle between Sandor “the Hound” Clegane and his older brother, Gregor “the Mountain” Clegane. They shared a brief exchange in the Season 7 finale, where the Hound said, “You know who’s coming for you.” These days, the Hound travels as part of Jon Snow’s entourage and the Mountain remains Cersei Lannister’s blindly obedient undead bodyguard.

In Season 1’s “Cripples, Bastards, and Broken Things,” Littlefinger explained the horrifying story of how Gregor shoved Sandor’s face into the fire when they were just boys. Minutes later, the two clashed briefly during a jousting match. As such, the Hound feels destined to defeat his elder brother in combat as part of a lifelong quest for revenge.

In terms of sentimentality, there’s no reunion in all of Game of Thrones that is more earnest or long overdue than that of Arya Stark and Jon Snow. They consider themselves half-siblings when they’re actually cousins, and even if they’ve only shared a single scene with just the two of them, their bond has influenced Arya at every step of her journey. Even when she was a blind beggar on the streets of Braavos, the single possession Arya kept was Needle, the steel sword Jon gifted her in Season 1, Episode 2.

Among all the Stark children, these two share perhaps the most intimate connection. We don’t know much about their relationship before the pilot, but they were seemingly both the black sheep of the family. Arya preferred weapons and fighting as opposed to more ladylike activities, and Jon being raised as a bastard made him an automatic outcast.

There’s more sentimental fluff from the books we can also consider: Ned Stark remarks on one occasion that Arya reminds him of his sister, Lyanna. She alone among her siblings has the “Stark look” (except for Jon) whereas the others take after their mother Catelyn Tully’s side of the family.

Jon and Arya are also two formidable fighters — the only two in the Stark family, actually — who each wield a Valyrian steel weapon capable of killing White Walkers and their wights. The two characters fighting side-by-side in the Great War just feels right, especially after so much time spent apart.

Game of Thrones returns for a final Season 8 starting Sunday, April 14 at 9 p.m. on HBO.