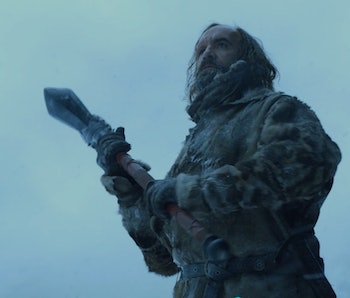 Although Game of Thrones fans have a plethora of opinions and theories about various characters and plots, there is one thing that unites the expansive fan base and gets them hyped up: Cleganebowl. The theory that Clegane brothers Sandor and Gregor — also known as the Hound and the Mountain — will fight to the death has always seen widespread popularity. And, the Season 7 finale makes it more possible than ever, because they’ll be in the same location for the first time in years.

Unlike other Game of Thrones theories, Cleganebowl does not involve prophecy or secret Targaryens or hidden messages. It simply involves the childlike joy of watching things — or two giant angry brothers — go smash.

Over the years, Cleganebowl has spawned its own sub-community within the Game of Thrones fandom. It has its own catchphrases (“get hype” and “fucking confirmed”), its own subreddit, its own signature sound effect (air horns), and its own plethora of fan-made trailers.

But until Season 7, it seemed as improbable as the theory that Varys is a mermaid.

In Seasons 3 and 4, the Hound was far away from King’s Landing, while his brother was killing Oberyn and wreaking havoc. In Season 5, he was presumed dead, and the next year he was living a peaceful life on a religious hippie commune with Ian McShane.

Season 7 has sent him even further away from his zombified older brother, as he’s traveled far north and battled the Army of the Dead with Jon Snow.

And guess who is in King’s Landing serving as Cersei’s loyal bodyguard? The Mountain. In this still from the trailer for the Season 7 finale, the Hound looks like he’s throwing down with someone. Intriguingly, it looks like he’s looking up, facing someone who is even taller than he is. The Mountain is the only other character who towers over him.

Cleganebowl has never been so tangible — and if it does happen, there will also be dragons there. Picture the Hound and the Mountain getting into a fight as dragons roar in the background. Sure, one dragon is dead, but two are very much alive.

Perhaps the remaining dragons will help the victor finish his opponent off. After all, it would be poetic for the Hound to use fire to kill his brother, bringing their story full circle from their childhood, when the Mountain burned his face.

Sure, it’s not quite fucking confirmed, but you’d best get hype.

The Game of Thrones Season 7 finale airs on Sunday, August 27 on HBO.