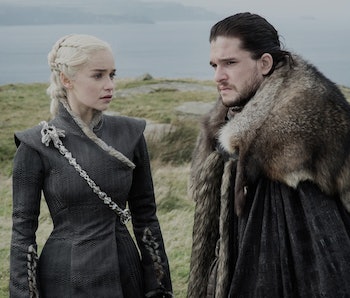 HBO has released the name of the seventh and final episode of Game of Thrones Season 7: “The Dragon and the Wolf.” The press release includes no description of the episode aside from the title — though it does say the run time is 79 minutes and 43 seconds.

Still, there are many meanings to be gleaned from this title. The most obvious is, for better or worse, incest. The sixth episode established that Jon and Daenerys have feelings for each other, even though they don’t know that they’re aunt and nephew. This fact wouldn’t bother Daenerys if she knew (since the Targaryens are traditionally incest-happy), but it would likely bother Jon.

Still, the episode title hints that their budding romance will see progression — perhaps a marriage proposal between the wolf Jon and the dragon Daenerys.

Alternate options include an alliance between the Starks and the Targaryens as the show sets up the eighth and final season.

In the finale, Jon, Daenerys, Cersei, and their assorted entourage will gather in King’s Landing. Once there, Jon will show Cersei the wight he captured in “Beyond the Wall” and try to rally the realm to put aside their politics and fight the Night King. This has been a highly questionable plan from the beginning since Cersei obtained her power by gathering her enemies in one place and blowing people up. It’s astounding that anyone would expect her to act “reasonably.” So perhaps she won’t, and the Starks and Targaryens will become allies, leaving the Lannisters defeated or on their own.

Game of Thrones does love its “the something and the something” episode titles, like “The Lion and the Rose” (Joffrey dies) and “The Mountain and the Viper” (Oberyn dies). Past precedent says that this kind of title suggests that one of the two parties will bite it. However, in this case, it’s more likely that the two parties will bite each other.

The Game of Thrones Season 7 finale will air on Sunday, August 27 on HBO.