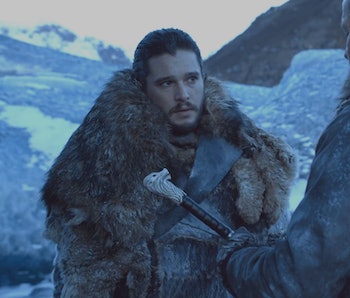 Azor Ahai is a legendary hero who saved the world once on Game of Thrones. The prophecy says that he or she will be reborn and save it again, which seems pretty pertinent with the Long Night looming. Most fans think it will be Jon Snow or Daenerys Targaryen — but Season 7’s penultimate episode, “Beyond the Wall,” offers an intriguing new angle.

Spoilers below for Game of Thrones Season 7 Episode 6, “Beyond the Wall.”

In “Beyond the Wall,” the Night King kills Daenerys’ dragon Viserion and raises him as an undead, zombie ice dragon. That event is so monumental that it would be understandable if you overlooked some of the episode’s quieter moments. Sure, one of Dany’s “children” died, but there were plenty of references to a potential future son or daughter.

“Beyond the Wall” contains not one, not two, but three shout-outs to Daenery’s possible future offspring. That’s a lot for someone who is supposedly infertile. It hints that perhaps Azor Ahai has yet to be born, and the song of ice and fire has another meaning. Let’s take a closer look.

First, Jon tries to give his sword Longclaw back to Jorah since Jorah’s deceased father originally gave it to Jon. (Remember, Jorah’s dad preceded Jon as the Lord Commander of the Night’s Watch). Jorah refuses, saying, “It’s yours, it will serve you well. And your children after you.” As he says that last part, he has the same solemn look he wears when talking about Daenerys — as if he has a certain dragon queen in mind as the mother of Jon’s future children.

Finally, at the end of the episode when Jon and Daenerys share a tender moment, she says, “The dragons are my children. They’re the only children I’ll ever have. Do you understand?”

Since she’s holding Jon’s hand, and the episode makes it clear that Jon and Daenerys have feelings for each other, the implication is that Dany is considering doing activities with Jon that lead to children — some good ol’ fashion aunt/nephew incest. More importantly, the implication is that she’s not thinking about him in a casual sex way like Daario Naharis, but as a partner, the kind who would be the father of her children if she could have them.

There are several different interpretations of the meaning of the series title A Song of Ice and Fire. Some think Jon encapsulates the whole thing himself since he’s born of a fiery Targaryen father and an icy Stark mother. He’s also come of age at the icy Wall, but he was resurrected by the fiery Lord of Light.

Some think the song of ice and fire is Jon and Daenerys. They’ll get together, and she’s the fire, while he’s the ice. Melisandre seems to think so, because before she left in Season 7, she said, “I brought ice and fire together.”

But there’s another quite relevant theory. Some fans think that Jon and Daenerys will have a kid, and that will be the song of ice and fire. Sure, Daenerys thinks she can’t because of a witch — but she’s walked through fire, and her potential baby daddy has been resurrected. Both Jon and Daenerys have individually done more miraculous things than conceiving a kid when they thought they were infertile.

And if you are inclined to believe this theory, “Beyond the Wall” is adding evidence to it with all these child references involving both Jon and Daenerys.

If that does indeed happen, it suggests another candidate as the legendary savior, Azor Ahai: not Jon and not Daenerys, but their future child.

After all, George R. R. Martin has said that the story will have a “bittersweet” ending. What could be more bittersweet than the heroes not getting to truly see the fruits of their labor, because their child is the one who will save the world. It would be a fitting end, and “Beyond the Wall” is offering some intriguing foreshadowing.

Game of Thrones will finish its seventh season on Sunday at 9 p.m. Eastern on HBO.