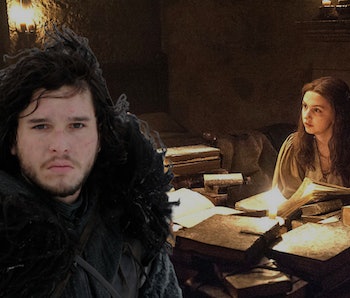 The fifth episode of Game of Thrones Season 7, “Eastwatch,” sees Gilly make a game-changing discovery at the Citadel. It seems that Shireen Baratheon (RIP) changed the political landcape of Westeros when she taught Gilly how to read.

Spoilers are below for Game of Thrones Season 7 Episode 5, “Eastwatch.”

In “Eastwatch,” Gilly reads about a maester who annulled Rhaegar Targaryen’s wedding and helped him marry “someone else” in secret in Dorne. That someone could only have been Lyanna Stark. This means that the Iron Throne and the Seven Kingdoms rightfully belong to Jon Snow.

The show still hasn’t actually said Rhaegar is Jon’s father. Are you sure?

Rhaegar — Daenerys’s deceased older brother — is definitely Jon Snow’s father. Although the show hasn’t spelled it out yet in plain language, it’s there in the subtext. Season 6 revealed that Ned’s sister Lyanna Stark is Jon’s real mother. Before Jon was born, Rhaegar Targaryen ran away with Lyanna Stark. It’s long been rumored that he abducted and raped her. Sansa Stark even believes this story, as she tells Petyr Baelish in Season 5.

But as “Eastwatch” clarifies, Lyanna Stark’s relationship with Rhaegar was likely consensual if he annulled his old marriage for her and married “someone else.” The “abducted and raped” narrative was spread by Lyanna’s spurned fiancee, Robert Baratheon, perhaps because he was angry and didn’t know any better.

In response to this “abduction,” Robert Barathon started a war. This lead to him ultimately taking the Iron Throne and killing Rhaegar in battle with his warhammer. (Incidentally, that’s why his bastard Gendry, who is finally back, wields a hammer in “Eastwatch.”)

Rhaegar might have survived if he brought his best friend Arthur Dayne with him to battle, as he was a legendary swordsman. Rhaegar left Dayne behind to guard his pregnant wife Lyanna Stark in the Tower of Joy.

In Bran Stark’s sixth season peek into the past, a young Ned Stark fights Dayne and kills him in a dishonorable manner. Before their fight, Ned asks Dayne why he abandoned Rhaegar.

There’s nobody else who could have gotten Lyanna pregnant, and there’s no other reason Rhaegar would insist upon Dayne staying behind to guard Lyanna.

Further, the show has woven parallels between Jon and Rhaegar into Season 7. And in Season 5’s “Kill The Boy,” Maester Aemon commented about the pathos of a Targaryen alone in the world — and Jon showed up immediately after, as if on cue.

And if that isn’t enough, HBO released an infographic after Season 6 confirming that Rhaegar is Jon’s dad.

Okay, so what’s the deal with his marriage annulment?

When Rheagar ran away with Lyanna, he was already married to someone else: Oberyn Martell’s sister. So even though it was always known that Jon was Rhaegar’s son, he could have been his bastard.

In that case, the revelation about Jon’s parentage would just be an interesting end to a long mystery and an awkward turn in his budding flirtation with Daenerys.

But because Rhaegar annulled his first marriage and, we assume, married Lyanna, that changes everything. Jon Snow is not a bastard, albeit a Targaryen one. He’s Rhaegar’s legitimate son, meaning he’s also his legitimate heir.

What does this mean?

If Daenerys wants to re-assert Targaryen rule, she isn’t actually next in line. The Iron Throne belongs to Jon. Hopefully, Sam actually listened to Gilly when she read this bombshell.