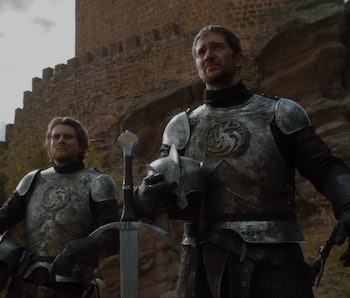 In the latest episode of Game of Thrones, Bran Stark’s Tower of Joy flashback caused many viewers to yell, “Oh, come on!” as the scene cut short right when things were getting interesting. After all, as Isaac Hempstead-Wright told Inverse, the Tower of Joy will be home to “earth-shattering” information.

But some fans’s feathers were ruffled even before that. As you might recall, while Bran watched Young Ned fight Arthur Dayne — also known as Woodes Rogers to Black Sails fans — he mentioned that Dayne was known for his legendary sword skills.

Naturally, because no Game of Thrones character can only have one name, Dayne was known as The Sword of The Morning. And naturally, because the story can’t name a character without also naming inanimate objects which are associated with that character, Dayne’s sword also had a name: In the books, he wielded a legendary greatsword called Dawn.

In the show, you might recall he had two swords. The change might seem minor, to some, but GoT fans are nothing if not detail oriented, and it’s stirring up quite the controversy.

One Reddit user pointed out, “Dual-wielding looks cool but he would be at a disadvantage. I’d expect better from the best swordsman in the Seven Kingdoms. There’s a reason why dual-wielding prevails in video games and not in historical sources.”

Another user pardoned it: “I think it showed how one could make it work. It’s unpredictable, and in a world like Westeros where fighting styles are usually fairly structured, it would be a real pain to throw out everything you knew for one dual-wielding guy.”

The Game of Thrones wiki is downright snarky about it — at least, as snarky as Wikis can be.

In the A Song of Ice and Fire novels, Dawn was forged from the metal of a “fallen star”. Its blade is as pale as milkglass and is said to be just as sharp as Valyrian steel. In the novels, Dawn is a Greatsword similar to Ice, which Ser Arthur wields with both hands, whereas in the show, it is portrayed as a Longsword wielded alongside a second blade in the off-hand. There is no mentioning in the novels that Arthur has ever used a second sword alongside Dawn.

The sass levels in that last line are approaching Queen of Thorns level.

Both sides of the argument have merit. On the other hand, it seems silly for the show’s writers to change something so minor, needlessly invoking fan-rage. Would it have killed Game of Thrones to depict the guy who was known for his big shiny sword as wielding a big shiny sword?

But on the other hand, it seems silly to get upset about a minor change like swapping one large sword for two swords. And the two swords makes sense as a shorthand way to convey Dayne’s badassery without pausing to give us an expository monologue about Dawn.

The big takeaway is, if you think Game of Thrones fans can’t stir up debate even about seemingly minor details, then, frankly, you know nothing.