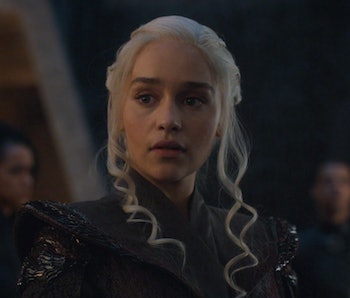 The world of Game of Thrones is especially apocalyptic in Season 7, with an army of ice-zombies encroaching upon humanity. But what might save the day isn’t a special weapon. Instead, English grammar has altered that big Azor Ahai fan discussion.

In “Stormborn,” the second episode of Season 7, Melisandre meets Daenerys at Dragonstone. Naturally, she immediately begins talking about prophecy. But then Missandei steps in, and thanks to her years as a translator, she drops a grammar bomb.

Melisandre’s favorite prophecy concerns the prince that was promised, a figure who is destined to save the world from the Long Night. There’s a similar legend about Azor Ahai, a mystical hero who saved the world from darkness long ago who is supposed to be reborn to save it once again. Fans have varying opinions on whether these are two different names for the same person or whether Azor Ahai and the prince that was promised are two different people.

In response to Melisandre’s words about the prince that was promised, Daenerys points out that she’s not a prince. “Forgive me, but your translation is not quite accurate,” says Missandei. “That noun has no gender in High Valyrian. The proper translation for that prophecy would be the prince or princess who was promised will bring the dawn.”

Additionally, Melisandre’s certainty that both Daenerys and Jon Snow have roles to play opens the door for the prince that was promised and Azor Ahai reborn to be two different people rather than alternate names for the same person.

If that’s the case, signs point to Jon as Azor Ahai. One of the conditions is to be born under a “bleeding star,” and as Season 6 revealed, his birth bed was bloody and Arthur Dayne’s sword — which was forged from a fallen star — was present.

In Season 6, Melisandre was certain Jon Snow was this legendary savior, while the mysterious Red Priestess Kinvara was sure it was Daenerys. Both could be correct.

“Stormborn” has complicated the popular theory about Azor Ahai and the prince or princess that was promised. And while it remains to be seen whether a legendary hero will save the day, grammar sure did for now.