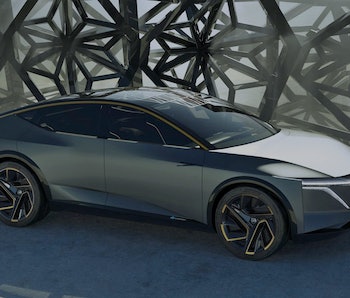 The 2019 Detroit Auto Show kicked off in earnest on Monday and, while many of the biggest players in electric cars sat this year’s show out, a number of futuristic new electric vehicle concepts were still able to take the stage.

Out of the twelve brands that took the stage at the convention center, three teased electric cars. That’s way fewer than the number of EVs unveiled in 2017, though to be fair, some of these unveilings have moved to more tech-centric activations like CES.

The Detroit Auto Show is also going through something of a transitional period — 2020’s will be held in June — and several major EV players including Tesla, Jaguar, Mercedes-Benz, and Audi didn’t attend. But even with a reduced number of all-electric car launches, several legacy brands that stepped up with new concepts, including Cadillac, Nissan, and China’s GAC.

The biggest head-turner came from Cadillac, which kicked the show off with a Sunday reveal of its new EV concept. The General Motors subsidiary took the wraps off of the first face of its BEV3 electric car platform with a series of concept images. The company didn’t mention a model name, price, range, or anything beyond these pictures, but did say it will hit the pavement some time in 2021.

This concept announcement comes days after the General Motors revealed Cadillac would become its leading electric vehicle brand. The mysterious model seems, for now, to be destined to become a mass-market SUV.

“Cadillac’s EV will hit the heart of the crossover market … while positioning Cadillac as the pinnacle of mobility,” reads Cadillac’s press release.

Aside from this specific model, GM plans on introducing 20 cars that are either battery or hydrogen powered over the next four years, according to an AP report.

Nissan wants to take the sedan to new heights with its IMs concepts it debuted Monday. The Japanese automaker doesn’t plan on releasing this take on its all-electric vehicle until 2025, but, at least compared with Cadillac, had more to share. We know already that the IMs concept packs dual electric motors with 483 horsepower along with a 115-kilowatt hour battery that could provide an estimated 380 miles of range.

“The IMs explores the limits of sedan design with an approach that elevates the category in both look and functionality,” Alfonso Albaisa, Nissan’s senior VP of design told Green Car Reports.

The interior is even more interesting, and looks like the inside of a spaceship having been designed with autonomous driving in mind. If self-driving technology becomes readily available, the IMs sedan’s rectangular steering wheel will retract into the dashboard, freeing up more space. The two front seats can swivel around to face the back bench, which can accommodate up to three people to create a driverless car lounge.

The Chinese company also designed a EV concept that it says will be the “ultimate road-trip car.” Its so-called Entranze concept fits seven passengers, has sliding glass doors, and could have a range of 370 miles on a single charge — assuming it uses the same build as GAC’s Enverge vehicles. Unfortunately, the company didn’t announce an estimated year of release.

“The Entranze is the representation of GAC’s wonderful experience exploring the marketplace via the celebrated tradition of the American road trip,” GAC’s Executive Design Director, Pontus Fontaeus, said during its announcement.

The inside is said to be primarily made of environmentally sustainable materials like cork, while the dashboard includes two OLED screens. While this might have the potential to redefine the family-sized car in the U.S., as with the other concepts, we might have to wait a at least a few years before it becomes available.