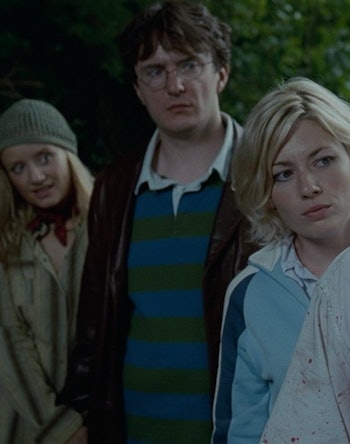 Never before has December been such a great time for zombie movies, yet here we are in 2018 when Christmas is the time for people to devour each other. Actually, that might make a lot of sense.

Just as the excellent Anna and the Apocalypse zombie Christmas musical hits theaters, perhaps the greatest modern zombie classic lands on Netflix. Shaun of the Dead is now available to stream alongside several other excellent films featuring the undead.

So if Netflix streamers want something a little more hardcore this December rather than The Christmas Chronicles or other holiday fanfare, why not taste some brains?

The next time you’re hankering for a taste of tomorrow, here are the 11 best pieces of science fiction on Netflix with a focus on the new, exciting, and original — but more importantly, the good recommendations. And this time around, special attention is given to zombies because that’s what Christmas is all about.

Shaun of the Dead

Shaun of the Dead is undeniably one of the greatest black comedies of all time, and it helped establish the zombie subgenre as a growing obsession long before The Walking Dead boom. A hapless pair of losers in their early 30s wake up one day to the zombie apocalypse in London, and their weird plan for survival is to hole up at their local watering hole.

But director Edgar Wright’s energetic style and the infectious comedy of Simon Pegg and Nick Frost really elevate Shaun of the Dead to something that everyone needs to see.

Train to Busan’s been around on Netflix for awhile, but it warrants repeating alongside Shaun of the Dead. The premise is ostensibly just “zombies on a train,” but writer and director Sang-Ho Yeon infuses it with enough excitement and humanity to create one of the best zombie stories in quite a while.

The central story involves a selfish, workaholic father taking his daughter on a birthday trip to see her mother. When the zombie outbreak deters their travel plans, a struggle for survival plays out as the two try and connect as father and child. It’s all pretty simple and straightforward, but it’s compelling and heartfelt all the same.

Netflix’s original zombie movie set in southern Australia might not quite compare to Shaun of the Dead in terms of sheer charm or quality, but Cargo is still compelling, beautiful, and emotional affecting.

A father has 48 hours to save the life of his baby daughter before something absolutely terrible happens. It’s essentially an Australian Children of Men with zombies that pays special attention to how society responds to the pandemic, assessing the disease itself. Rest assured, this zombie virus is caused by people messing up science and not by hellish beings from the underworld.

8. Cloudy with a Chance of Meatballs

The prequel cartoon currently on Netflix simply cannot compete with the 2009 Sony Pictures feature film in which wannabe-scientist Flint Lockwood lives on an island in the middle of the Atlantic Ocean.

Flint’s inventions are a steady string of total failures. One day, a device designed to convert water into food goes haywire, rocketing up into the atmosphere, where it corrupts the local weather into raining down all kinds of food … including meatballs. What ensues is a hilariously weird adventure in which the entire island becomes a food-based wonderland.

Neo Yokio is best described with one potent question: What if Wes Anderson made a star-studded magical fantasy anime that was a satire of commercialism and the upper class? To be clear, Wes Anderson has nothing to do with Neo Yokio, but the series has the same colorful pallet and dry sense of humor.

In the future of an alternate history, a drowned New York becomes “Neo Yokio.” Kaz Kaan (Jaden Smith) is the pink-haired “magistocrat” tasked with protecting the city from supernatural (mostly demonic) threats. Neo Yokio celebrates anime tropes, upper-class society, and classism just as much as it criticizes such things. If you delight in the truly weird, then don’t hesitate watching the hilarity that is Neo Yokio.

There’s never been a better time to check out this show for it’s futuristic tech and sardonic wit, especially because there’s a Christmas special called “Pink Christmas” due out on Friday, December 7.

All eight completed seasons of The Walking Dead are on Netflix, where they’ll probably remain until the end of time. Say what you will about lackluster ratings and storytelling quality in recent seasons, but nobody can argue how crucial The Walking Dead is to the zombie genre. The series debuted just as zombie saturation peaked in the zeitgeist and boasted some of the best ratings on television for years.

Catching all the way up is a slog, but in this zombie-filled December, why not revisit the excellent first season?

Maniac tells the stories of Annie Landsberg (Emma Stone) and Owen Milgrim (Jonah Hill). Over the course of 10 episodes, we see how they experience the late stages of a mysterious pharmaceutical trial promising to cure their differing but equally severe mental disorders.

The story comes from novelist Patrick Somerville, who wrote for The Leftovers. But what has me truly excited is director Cary Joji Fukunaga, the same guy who made True Detective Season 1 one of the greatest seasons of television ever.

Stranger Things 2 brings the whole gang back — along with some newcomers — for an even bigger adventure set a year later.

Though it dips into the realm of horror and satire, Black Mirror is consistent with one question: What can technology do to us when it’s taken to extremes? Some episodes have more to do with social media or YouTube obsessions, but others dive deep into the implications of many hard sci-fi concepts, including the cyberization of the human mind, technological surveillance, and human-like A.I. machines.

Black Mirror provocative and exciting at its best and downright disturbing at its worst — but even then, it’s still high-quality science fiction.