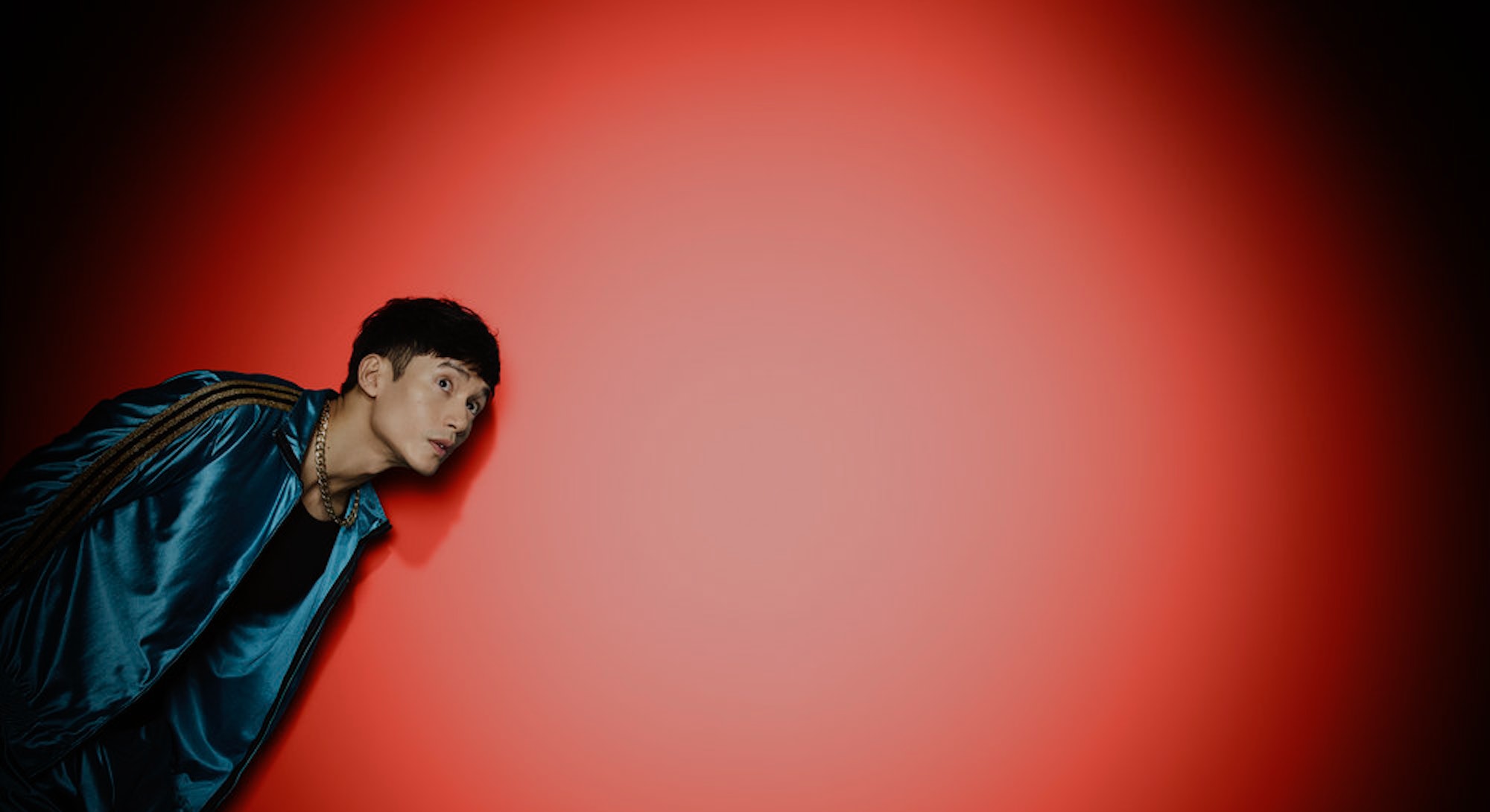 Manny Jacinto, known for playing Jacksonville, Florida’s most okay DJ in the NBC sitcom The Good Place, still remembers having an identity crisis while scarfing teal burgers at a Jacksonville Jaguars game.

“They have pools in their stadium!” Jacinto tells me, awe in his voice.

A proud 31-year-old Filipino-Canadian raised in British Columbia who grew up on hockey, Jacinto wasn’t used to seeing Americana in its final form when he attended his first NFL game in January 2018, between shooting seasons of the popular network sitcom.

"I didn’t know whether to be Manny Jacinto or Jason Mendoza."

But it was there, in a game where the Jaguars beat the Buffalo Bills 10-3, that the borders separating Jacinto from his alter ego, Jason Mendoza, a sexy and dumb electronic dance DJ whose main hobby is throwing lit Molotov cocktails while yelling the name of Jaguars quarterback Blake Bortles, began to blur.

“It was a weird experience,” he says. “I didn’t know whether to be Manny Jacinto or Jason Mendoza. Within a group of people that recognized me, I’m Jason. If I had a private moment, I could be Manny. I had to juggle.”

If it’s now so easy for Jacinto to turn into Jason that it happens at a Jags game, it’s because Jacinto has spent the last two years doing so. In fact, the role is so “ingrained” in Jacinto, he can predict what Jason will say or how Jason will act before scripts come in.

“It’s more comfortable now,” he says. “I still have work to do, but I know I’m getting into Jason’s shoes easier and quicker. I’ll automatically know what Jason will think or do, or how he listens. It’s more ingrained in my body than it was the first two seasons.”

On September 27, Season 3 of the hit supernatural sitcom The Good Place premiered on NBC. The series follows four dead, distasteful individuals who navigate their torment in the afterlife, a deceptively idyllic neighborhood tailored to offend them at their most base levels. This season, the gang returns to Earth as living beings, unaware of their experiences in the “Bad Place” but still watched by their guardian demon, Michael (Ted Danson).

“You have the four humans on Earth and they don’t know they died,” explains Jacinto, adding that while they don’t remember the Good/Bad Place, they have still evolved from their time spent in torment.

“Jason’s just a bit smarter [from] being around the humans,” he says, “They influence him to be better, to be cognisant of other people and less selfish. He’s grown a little bit.”

A matured Jason Mendoza sounds like an oxymoron. But Since The Good Place premiered two years ago, the sitcom’s resident goof has been called many things by the internet: lovable doofus, delightful, even hot.

But one thing Jason hasn’t been called is a racial stereotype. Had it existed in another time, The Good Place probably would have rendered Jason Mendoza like another Long Duk Dong, who appeared to the sound of gongs in the ‘80s teen movie Sixteen Candles.

But Jason (thankfully) does not. Jason is also part of a new generation of Hollywood Asian characters who rebel against the stereotypes of yesteryear, in their exaggeration of the “Asian Bro” you may find in real life. Personalities you might even find at a Jaguars game.

Jason’s tendencies to go gaga over Madden NFL or enter a love triangle counters so many tired tropes that films of the ‘80s and ‘90s ran into the ground. Jason isn’t brainy (Hiro Nakamura, Heroes), or sexless (Mr. Yunioshi, Breakfast at Tiffany’s), or a martial arts master. He’s just… Jason Mendoza.

And when the show pulled a fast one with the Jianyu/Jason reveal (Oh right, forgot to mention, Jason faked his identity as a silent monk in the show’s first few episodes) it felt like The Good Place was galaxy braining in front of us. If you were uncomfortable with “Jianyu,” with his vacant expression and “exotic” appearance that categorically defined him as “other,” his true identity as Jason felt like a hilarious overcorrection.

In broad strokes, pop culture is behaving better with respect to racial, gender, and sexual diversity. It’s not perfect, but there’s been progress. Months before The Good Place hit the airwaves, hashtags like #OscarsSoWhite, #StarringJohnCho, and the term “white-washing” trended online and entered the lexicon. It raised questions about diversity in media and pressuring everyone, including major studios, to think more carefully about how it portrays people of color.

And that’s fine, but progress can look different when you’re thrust into the center of it. “It is such a big question, I feel like I’m only a gear in this whole system,” Jacinto says.

Along with Riz Ahmed, Henry Golding (Crazy Rich Asians), Vincent Rodriguez III (Crazy Ex-Girlfriend), Rahul Kohli (iZombie), and Lewis Tan (who stole all six minutes of his screen time in Marvel’s Iron Fist), Manny Jacinto ranks among a group of Asian men in Hollywood who are redefining the culture’s masculinity. He’s aware of that responsibility too, because once upon a time, Jacinto also looked at the TV and didn’t see anyone like him.

“I just watched Better Luck Tomorrow again two weeks ago,” Jacinto tells me. “I first watched it in high school, and I had no idea the type of impact it would have later on in my career.”

In Better Luck Tomorrow, from Fast & Furious director Justin Lin, overachieving Asian-American students enter a life of petty crime that quickly escalates beyond their control. The film directly addressed the “model minority” stereotype assumed by Asian-American youths as the characters use their cover as model students to get rich. The film was inspired by the 1992 murder of a California teenager, Stuart Tay, in an incident local media called the “Honor Roll Murder.”

Jacinto and his inner circle resonated with the film with its ensemble of three-dimensional characters acting against what people expected of them. “I wasn’t conscious of its effect. I watched Better Luck Tomorrow with my closest friends, like, ‘These guys are just like us!’”

“Han,” a character in the film played by Sung Kang who exudes cool not seen since James Dean, was a revelation to Jacinto. “I was given the nickname ‘Han, and to this day my friends still call me Han because we loved the character so much. We related to their stories so much.”

Although it was a critical darling that launched Justin Lin’s career (after 2016’s Star Trek Beyond, Lin is now helming the Cinemax series Warrior), Better Luck Tomorrow may have come too early to have lasting impact on anyone outside the Asian-American audience it reflected.

Jacinto argues that now, more than ever, is time for more Better Luck Tomorrows.

“The same old chummy group of friends isn’t gonna cut it anymore,” says Jacinto. “People have a higher standard nowadays. That’s where diversity and diverse stories come in. I don’t know if you can call it the golden age of television, but we’re in a time where there are so many different mediums to tell stories. Everyone has a TV network. I’m just lucky to be in the industry at this point. I look up to all the guys that came up back in the day, like Daniel Dae Kim and John Cho. They did not have the opportunities current Asian-Americans have right now.”

Those opportunities are still only just a few compared to what’s been available for white actors. But progress is a slow burn, one that will take more movies like Better Luck Tomorrow, or the juggernaut romcom Crazy Rich Asians, or actors like Manny Jacinto to normalize.

And Jacinto is on his way. Not hours after our interview, the actor was cast to star in the long-awaited sequel to the Tom Cruise film Top Gun as a pilot named “Fritz,” and not something like “Yin-Yang” (Jet Li in The Expendables) or “Zen” (Xin Wuku, from the American Gladiators reboot).

Until then, Jacinto is still getting to know Jason Mendoza, someone who will never not be amazed at a swimming pool in an NFL stadium. Pro football is super problematic right now, but at its best, any game can like a celebration of the land of opportunity where anything’s possible. Even teal hot wings.

“It was crazy,” Jacinto recalls. “It tastes a percentage better because it was the Jacksonville Jaguars.”

The Good Place airs Thursdays at 8 p.m. ET on NBC.