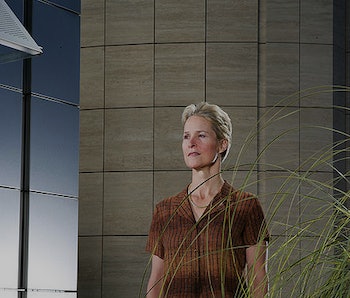 History was made early on Wednesday morning when the Royal Swedish Academy of Sciences called Caltech professor Frances Arnold, Ph.D., to let her know she’d won the Nobel Prize in chemistry. Arnold was asleep in a hotel room in Dallas as she discovered she’d become the fifth woman to win the prize in the award’s 117-year history and the first woman to win in the same year that a female scientist had taken home the Nobel in physics.

“And at first, of course, I thought it was one of my sons, with a problem,” Arnold, recognized for her work in directed evolution, told NPR. “But then it was a wonderful feeling. They told me that I had won the Nobel prize!” Arnold will take home half of the $1.01 million prize, and the other half will be split between the University of Missouri’s George Smith, Ph.D., and the U.K. MRC Laboratory of Molecular Biology’s Sir Gregory Winter for their work in using virus-infecting bacteria known as bacteriophages to create new proteins.

Together, the laureates “recreated the process” of evolution in test tubes and thereby made “evolution many times faster,” as the Nobel committee put it in its official announcement. In an interview with Inverse, American Chemical Society President Peter Dorhout, Ph.D., gushed about their accomplishments.

“To recognize that one now has the toolset to to be able to fine-tune some of the cellular machinery to create molecules in ways that which we as chemists struggle in a beaker, in a flask — to be able to do that and understand how that works in a complex chemical system such as a cell really baffles the imagination for what one could ultimately enable cells to do for us,” he says.

But perhaps more baffling is the fact that Arnold, whose understanding of the complex inner machinery of cells has led to the development of pharmaceutical drugs and renewable fuels, is only the fifth woman in history to win the Nobel in chemistry. The short list of previous female winners begins with Marie Curie, who won for her breakthroughs in radioactivity research in 1911, and her daughter Irène Joliot-Curie, who won in 1935.

It’s not clear what, if anything, has changed in the Nobel selection process or in the science community in general that has led to the notable increase in female laureates. Certainly, the #MeToo movement and more specialized movements involving women in STEM have become prominent lately, especially in the face of blatant sexism against women in science institutions such as CERN. To the optimistic, Arnold’s achievement, together with the awarding of the Nobel Prize in physics to Donna Strickland, Ph.D., could represent a changing tide.

“Our membership of nearly 150,000 chemists worldwide has been gradually becoming more and more diverse,” says Dorhout. “In the early stages of chemistry, there were a number of perspectives that I don’t necessarily share personally about accomplishments and abilities.”

Asked about her thoughts on being a woman in science, Arnold told NPR in 2014: “I’m sure that there are people who are skeptical that a woman can do this job as well as a man. I am blissfully unaware of such people — and have been gifted with the ability to ignore them completely.”

Arnold, for her part, is impossible to ignore. “Frankly speaking,” says Dorhout, “it’s just exciting to see another woman recognized as a laureate this year.”