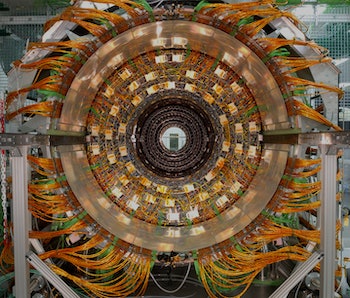 Last week the research organization that operates the largest particle physics laboratory in the world hosted its first workshop on the issues of gender and equal opportunities in theoretical high energy physics and cosmology. The European Organization for Nuclear Research, known as CERN, is especially famous for confirming the existence of the Higgs boson particle. But now, it’s gaining attention for something counterintuitive to the workshop it held: misogyny.

At the workshop, Professor Alessandro Strumia of Pisa University delivered a talk to an audience of mostly young women who work in STEM. He used his talk (slides available here) to argue that “physics is not sexist against women.” Strumia presented what he claims is evidence that women are hired over men regardless of merit and argued that behavioral research shows that men are more inclined to want to work “with things” while women prefer “working with people.” Gender equality, meanwhile, he claimed was a “thought police” tool that actually maintains “women and men in their traditional gender roles of victims and protectors/providers.”

Strumia also took time to argue that “in 2016 CERN [was] attacked as ‘homophobic’ by big media for nothing.” In March 2016, LGBT CERN members revealed that CCTV cameras caught other researchers at the facility defacing posters advertising their club events with references to biblical punishments for homosexuality.

“There is extensive literature from the fields of sociology, anthropology, women’s and gender studies, philosophy of science, ethnic and Black studies, and physics education research that directly contradicts Strumia’s claims,” Chanda Prescod-Weinstein, Ph.D., tells Inverse. Prescod-Weinstein is a postdoctoral research associate in theoretical physics at the University of Washington and has been awarded for her activism in equality in science.

“Notably, he’s not an expert in any of those fields, as far as I know,” says Prescod-Weinstein. “His comments come from a place of sexism and racism, topped with pure ignorance, and it is astonishing that someone who was so unprepared to give an intelligent and fact-based talk was given a platform at all. It’s hard to understand why, and I am hopeful that the organizers will be evaluating [why] in the coming days how the propriety of a speaker is determined.”

Since Strumia’s talk, the University of Pisa has announced its Ethical Committee will investigate his behavior. On Monday, CERN announced it had suspended Strumia from any activity at the organization with immediate effect and described his talk as “highly offensive.” CERN also stated that “organizers from CERN and several collaborating universities were not aware of the content of the talk prior to the workshop.”

As of 2010, women represented just 14 percent of physics faculty members in the United States. And that gap can be seen throughout physics departments. Just 20 percent of U.S. undergraduate and graduate physics students are women, and many claim that, inadvertently or not, they are made to feel like they don’t fit in. In a 2016 edition of the Physical Review Physics Education Research, two papers further argued that the culture of experimental physics created an unequal workplace where women’s choices, behavior, and training is constrained.

“Do I feel it is challenging for women in physics? Absolutely. Do I think it will be better for physics for there to be more women? Absolutely.”