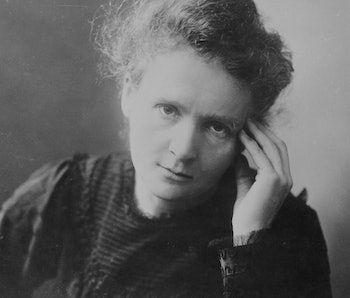 Tuesday night’s episode of National Geographic’s sometimes sexy show Genius kicks off with a flashback to a turn of the century laboratory. A young woman tinkers with some laboratory equipment; a bearded scientist notices her and asks if she needs anything. Turns out the woman is the brilliant physicist Marie Curie, and the dude is the man that will be her husband — and professional partner — Pierre.

But who was Marie Curie?

Born in 1867 in Warsaw, Poland, Maria Skłodowska’s early life was far from easy. Her parents were both teachers who expected all their children to excel academically. But they lost their land in nationalist uprisings right before Maria’s birth and her father continued to have problems appeasing the Russian officials occupying Poland throughout Maria’s childhood.

Skłodowska moved to Paris in 1891 to study physics, chemistry, and math. It wasn’t an easy endeavor: She withstood frigid winters and constant hunger. But times weren’t so bad, as she met the physicist, Pierre Curie; the two fell madly in love, with science playing a pretty substantial part in their chemical romance. “Marie” — as she became known in Paris — hadn’t intended to stay in France. She wanted to return to her family and to conduct research in Warsaw, so she rejected Pierre Curie’s earliest offers of marriage.

Fate intervened, though. The sexist University of Krakow denied Marie a spot as their faculty due to her gender, making a marriage and professional life in France much more palatable. In 1895, Marie married Pierre and took on the moniker that made her famous, Marie Curie. Instead of a bridal gown, Marie donned her lab outfit — a navy blue uniform that, like so many of her belongings, still tests positive for radiation today.

Pierre Curie had for some time been working on studying crystals, but Marie was interested in building on the new science of the X-ray and the science of what the Curies referred to as “radiation.” Tantalized by his wife’s early findings, however, Pierre ditched his own research to assist Marie in hers, making for an indomitable research team. In the five years after their first daughter’s birth, the Curies published 32 research papers between them, including the discovery of the elements polonium (named for Marie’s native Poland) and radium.

The Curies’ research into radiation earned them the respect and accolades of the world’s foremost institutions, soon attracting the attention of the Nobel committee. The committee subsequently offered Pierre and Henri Becquerel the Nobel Prize of 1903, not acknowledging Marie’s contributions because of her gender. Pierre, however, was an admirable early male feminist, championing his wife as his partner and equal and asserting that without Marie, their findings would be impossible, insisting that he’d only accept the Nobel Prize if Marie’s work was recognized. The committee relented.

Let’s take a moment to applaud Pierre’s dogged advocacy of his wife’s contributions to his research, which stands in direct contrast to Albert Einstein’s lack of respect for his own wife. While the evidence is far from decisive, Einstein appears to have used ideas generated by his first wife Mileva Maric in his own research, denied her recognition of her work, and all but punished her for her years of support. In conclusion: Einstein may have been a genius, but he certainly wasn’t a great guy.

Unfortunately, Pierre Curie was hit by a horse drawn carriage in 1906. His death crushed Marie Curie, but its aftermath was bittersweet. The University of Paris offered Marie Curie her husband’s chair, making her the school’s first female professor. (That didn’t mean they were willing to give her lab space, though. Because of course they weren’t.) Still, in 1911, Marie Curie snagged a second Nobel Prize, this time in chemistry, making her one of just two people, along with Linus Pauling, to earn Nobels in two different categories.

For all her clear and stunning aptitude, it’s difficult to imagine what would have become of Marie, who died of radiation-related aplastic anemia in 1934, if she hadn’t had such a supportive husband. Fortunately, Marie’s contributions to physics and chemistry were so uniquely earth-shattering that even the most sexist scientist would have to go very far out of his way to deny Marie Curie her place in the pantheon.

You May Also Like:At This Point, Einstein is Basically the Villain in GeniusWho Was Mileva Maric? What to Know About Einstein’s First WifeWhy the Element Marie Curie Discovered Also Killed Her(https://www.inverse.com/article/30992-genius-albert-einstein-national-geographic-nat-geo-recap-review-episode-2)Genius’ Struggles to Depict Einstein’s Genius, Ironically

More like this
Science
Jan. 29, 2023
Does the Doomsday Clock actually mean anything? Experts weigh in
By Jon Kelvey
Science
21 hours ago
Studying ancient human DNA has unlocked our origins — but the ethics are hazy
By Emiliano Rodríguez Mega and Knowable Magazine
Science
Jan. 24, 2023
Look: With a mouth full of teeth, this Pterosaur ate like a whale
By Jennifer Walter
LEARN SOMETHING NEW EVERY DAY.
Related Tags
Share: