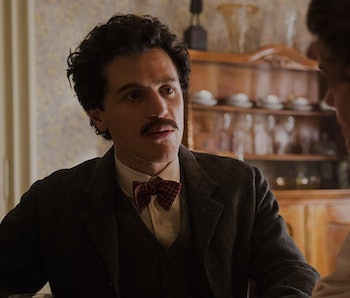 If the first episode of National Geographic’s Genius introduced audiences to the impudence of the genius with a sex scene just two minutes into the show, the second episode cements the show’s titular character as cocky with a problematic DGAF attitude, thanks to the introduction of his trademark mustache.

Bear with me here. At exactly halfway through the second episode, Albie’s created a bit of a shitstorm with his antics. It’s 1898 and the second-year student is back in school after a summer holiday that he’s spent with his betrothed, Marie, who he’s not really into after he meets Mileva Maric, the sole woman in his physics class and hands down the smartest one. She even beat our titular genius on entrance exams. The two are in a bit of a rough patch in their relationship since Mileva found that Albie’s just screwing around and flirting with her, thanks to Albie’s honest dunce of a roommate.

Which brings us to the ‘stache. In the fall of 1898, scientific fuckboi Albert Einstein struts into class, exchanges some pleasantries with his bumbling pals, and looks up to the camera to expose facial hair in the space between his nose and mouth, otherwise known as the mustache. Up until now, Albert was just a teenage goober, a boyish kid who isn’t good with authority, has the attention span of a fly, and emos out on his violin when he’s “thinking.” But the introduction of Albert Einstein’s flash of whiskers is key, in that Einstein moves from Albie to Albert, Renegade Fuckboi.

Viewers might miss the importance of the ‘stache in this scene. Perhaps they’re also distracted by Einstein’s friends’ ribbing (“If I closed my eyes, I could mistake you for my mother!” one smirks, while another recommends reading Mach’s reconsideration of Newton, to which Einstein can only muster a nonchalant “huh”) and his frequent glimpses up the stairs to where Mileva usually sits. These fervent glances speak loud and clear: Einstein’s crushing hard on Mileva and wants to see her. In the next scene, we see that Mileva — upset by how distracted she was by Einstein leading her on — is avoiding him by auditing classes at Heidelberg University.

But, despite the subtlety of a mustache, the new facial hair marks a transformation from Albie to Albert, a loud declaration to the world that Albie’s not here to play; he’s officially an adult. “Duh,” you might say. “He’s got a mustache. You need hormones and puberty for that.” Sure, and while cultural norms at the time encouraged men to keep a mustache, we’re led to believe that Einstein was able to maintain facial hair three months before and that the growing of this follicle forest is sort of an image makeover, a way to look at Mileva and declare, “Girl: I’m not a boy anymore. I’m a man.”

As Justin Bieber’s poor attempts to disguise himself show, the mustache is actually a great way to confuse other humans. The element of facial hair on a man’s face makes it hard for a person to recognize a person. Einstein might be using the element of surprise to get Mileva to rethink her outburst when she (rightly) accused Einstein of leading her on.

It’s far from new to try to use mustaches as a way to identify as a man, and in fact, many social psychologists have pointed the increasing, hipster-driven popularity of men with facial hair as a way to offer a statement of masculinity. But it’s not new: Mustachioed men have shaped history for better or worse, from Einstein to Teddy Roosevelt to Magnum P.I. to Charlie Chaplin and more.

What marks Einstein’s mustache as a pinnacle point in Genius is that we see him transition from just being a jerk to being a downright asshole. He’s selfish and domineering, and while those traits are apparent before in how he treats Marie, Mileva, and his professors, the mustache seemingly gives him permission to continue this crappy behavioral mindset. Einstein, in other words, becomes scum the moment he figures keeping a ‘stache will be part of his image, and its existence is a metaphorical homage to how (wrongfully) self-absorbed and righteous and greedy he is about his position in the world.

Einstein, for all his genius tendencies, is actually an idiot when it comes to figuring out emotional intelligence, consent, and respect, and while being counter to those can come across as quirky and endearingly mischievous as a child, Einstein’s manhood on his face means that he reminds you his truly garbage in character despite his brilliant mind, because he knows better than to treat people and ideas that don’t match his the way he does.

“Do you remember what we discussed, attention and commitment?” Einstein’s physics professor asks him when he and his quivering mustache ask about the whereabouts of Mileva. “They will serve you well.” It’s poignant in our luscious, fawning memory of Einstein that his lack of attention and commitment made him a very flawed individual, even more so post-‘stache.

More like this
Mind and Body
8.7.2022 2:00 PM
Living near one neglected piece of urban eye candy can greatly boost mental health
By Sarah Sloat
Mind and Body
8.3.2022 11:30 AM
The brain’s memory hub may explain why some people get PTSD and others don’t — study
By Miriam Fauzia
Entertainment
8 hours ago
Brilliant Galactus theory solves the biggest plot hole of Marvel Phase 4
By Alex Welch
Related Tags
Share: