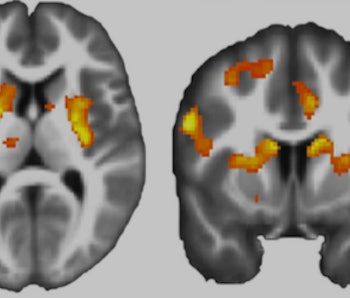 April’s Fyre Festival debacle illustrated that some people are more than willing to screw each other over, even though society burns them for it. In general, though, most people stick to social norms, shunning people who enrich themselves at the expense of others and admiring those who sacrifice their own well-being. Why the majority of us are willing to conform to those norms, however, is something scientists have only recently begun to understand.

New research suggests that our brain’s wiring may offer an explanation. In a new Nature Neuroscience paper, scientists describe using brain scans and electric shocks to suggest that the human brain is wired to discourage us from hurting other people for our own gain.

University of Oxford neuroscientist Molly Crockett, Ph.D., the lead author on the study, tells Inverse that this research sheds light on the psychological basis for social norms of morality. “We’re excited about these findings because we were able to use brain data to address a psychological question: Why do people prefer to profit from harming themselves rather than others? We found that the brain responds less to profit gained immorally (from shocking another person) than to the same amount of profit gained from shocking only oneself,” Crockett says. “Ill-gotten gains are worth less in the brain.”

In her study, 56 subjects making decisions in a brain activity-reading fMRI machine were given the option to deliver an electric shock to either another person or to oneself in exchange for money. At the core of the experiment was the question: Would you rather make money by administering electric shocks to yourself, or would you rather pay for someone else to take them? The participants’ decisions, Crockett found, were accompanied by some remarkable correlations in brain function.

Turns out that people don’t feel too great about paying to hurt others and that this can be seen in the brain. “Most participants displayed moral preferences, placing a higher cost on harming others than themselves,” the researchers write. They found that in the subjects who did decide to shock a stranger in order to earn money, the area of the brain associated with reward and decision-making, the dorsal striatum, was less active than it was when the subjects shocked themselves instead. This regulation seemed to be modulated by the lateral prefrontal cortex, the area of the brain associated with thoughtful action.

In short, when test subjects engaged in behavior they saw as less moral, they experienced less positive feelings. This result seems encouraging, but there’s a catch: This was only true in people who displayed stronger moral preferences. But even so, the correlation was significant.

This experiment shows a simplified version of human behavior. Even for people who consider themselves moral, the right way to make types of decisions in real-world situations aren’t always so clear. For instance, your fashionable sneakers may have been manufactured under inhumane labor conditions. Or you may be disgusted by the process that brought you your chicken nuggets. Crockett says that it’s encouraging to see these results but that the shades of gray should be investigated further.

“Our results show that the value of money is sensitive to how it is earned. The brain integrates the costs of harming others into our decisions,” Crockett says. “In our experiments, the human costs of profit were direct and obvious; in the real world, the human costs of our decisions are often hidden. Thinking more about these costs may encourage more moral behavior.”

She also hopes that this research can help inform therapies that teach people how to engage in moral decision making.

“We are currently trying to understand the neural basis of moral failures, in order to develop interventions that can encourage people to avoid benefiting themselves at the expense of others.”

Moral systems universally prohibit harming others for personal gain. However, we know little about how such principles guide moral behavior. Using a task that assesses the financial cost participants ascribe to harming others versus themselves, we probed the relationship between moral behavior and neural representations of profit and pain. Most participants displayed moral preferences, placing a higher cost on harming others than themselves. Moral preferences correlated with neural responses to profit, where participants with stronger moral preferences had lower dorsal striatal responses to profit gained from harming others. Lateral prefrontal cortex encoded profit gained from harming others, but not self, and tracked the blameworthiness of harmful choices. Moral decisions also modulated functional connectivity between lateral prefrontal cortex and the profit-sensitive region of dorsal striatum. The findings suggest moral behavior in our task is linked to a neural devaluation of reward realized by a prefrontal modulation of striatal value representations.