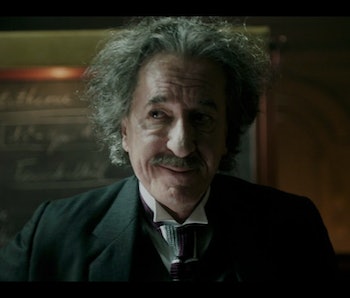 Albert Einstein’s legendary reputation as history’s greatest theoretical physicist, which National Geographic seeks to mine for humanity in Genius, is due in large part to his theory of relativity — actually two related theories — which continues to form a central pillar of modern physics a century after their development.

Einstein’s theory of special relativity, which he developed in 1905, describes how the laws of physics are the same for all observers who aren’t accelerating. In a vacuum, the motion of observers doesn’t influence the speed of light. Taken all together, this means that events could appear to take place at different points in time, depending on the position of the observer. For example, some stars that appear to shine brightly in our night sky actually burned out millennia ago, but because of our position in space, we have not yet observed those events. Special relativity therefore unified space and time into a single concept: space-time.

He spent the next decade developing his theory of general relativity, which describes the way massive objects distort space-time. This, he theorized, is experienced as gravity. General relativity describes the way that, if you lie on a waterbed, any objects on the bed will roll towards you. In this example, you are a massive object like a planet, star, or black hole, and the bed is space-time.

Einstein died in 1955, decades before scientists confirmed his theory of general relativity with the measurement of gravitational waves.

“If you ask me whether there are gravitational waves or not, I must answer that I do not know,” he said in 1936.

Now, 70 years later and less than two years after his theory was confirmed, Einstein’s theory of relativity teeters on the brink of obscurity.

In 2015, scientists at the Laser Interferometer Gravitational-Wave Observatory (LIGO) confirmed evidence of gravitational waves. These ripples in space-time, formed by the merger of two supermassive black holes, were exactly what Einstein had described with his theory of general relativity. But physicists studying the LIGO data found evidence of “echoes” that seem to contradict the predictions made by general relativity.

“Theoretical physicists Jahed Abedi, Hannah Dykaar, and Niayesh Afshordi, published a new paper explaining that the group believes they have detected the first evidence of gravitational effects not explained by general relativity in the data,” reported Inverse in the wake of the LIGO announcement. In this way, Einstein’s vindication could also prove his theory’s undoing. And this isn’t the only evidence that could disrupt the theory of relativity.

Physicists studying the early origins of the universe hypothesize that light has not always traveled at the same speed. This directly challenges special relativity.

“João Magueijo from Imperial College London and Niayesh Afshordi of the Perimeter Institute in Canada proposed a new experiment proving Einstein wrong and demonstrating that the speed of light actually isn’t a constant,” Inverse reported in November 2016. “The pair thinks light may have moved faster in the past, around the time of Big Bang, and that it’s actually slowed down since.”

They suspect that the lumpy density of the early universe caused light to behave differently. As the universe expanded and smoothed out, these lumpy areas disappeared. But there still may be some areas at the edge of the universe where the lumpiness persists, and in these areas, faster-than-light travel could be possible.

That’s why Einstein’s theory of relativity, which provides the foundation of most of modern physics, may soon be proven wrong as advanced technologies enable us to peer farther into the expanding universe than we ever have before: Once we finally peer into a black hole, we might find that Einstein was wrong about general relativity.

That’s just how science works, though. Einstein proved Newton wrong, but that doesn’t make Newton’s contributions to science any less significant. Every scientist stands on the shoulders of those who came before. Now we get to see who stands on the mighty shoulders of Albert Einstein.