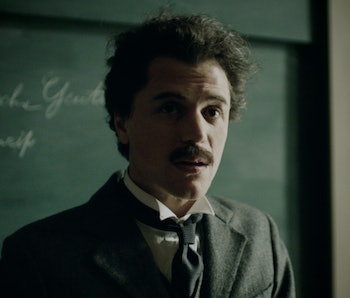 Even though the fourth episode of National Geographic’s Genius. ended with Einstein unveiling “e=mc2” and an eye-rolling title-drop, he wasn’t the real genius of the hour. No, he was the villain — and the show was all the better for leaning into it.

Spoilers for Season 1, Episode 4 of Genius are below.

Although there is some historical debate about just how much Einstein’s first wife, Mileva Marić, helped him formulate his world-changing theories, she was certainly a brilliant mind herself, and an integral part of young Albert’s life. Genius, which is based on Walter Isaacson’s book, has chosen to firmly portray her as a near-equal partner in his research. It has also chosen to show that Einstein cruelly and thoughtlessly betrayed her.

At first, it seems like Einstein and Marić are doing quite well as a couple. With the help of Marić’s parents, they’re raising their son while collaborating on scientific papers as Einstein works at the patent office. However, when Einstein’s domineering and disapproving mother comes to replace the Marićs, things turn south very quickly. Mama Einstein is full of vitriol and wants to push Marić into the traditional role of housewife. Though Einstein eventually rises to defend Marić (and their work together) against his mother’s assault, for the most part, he’s pretty chill to just let the two have at it — and he’s super cool with letting the pair of them do all the work raising the baby.

Here, more than in previous episodes, we do get a sense that the work Einstein is doing is both important and profoundly intelligent. However, the focus is really on Marić. She’s the one who has to deal with her mother-in-law’s wrath and the societal pressure to be a mother and a wife exclusively. She’s the one who has her contributions to science reduced to grunt work, and then gets utterly betrayed when Einstein credits his co-worker instead of her, his longtime collaborator (and, you know, his wife).

Genius paints Marić as a sympathetic, wronged character, so Einstein’s slights against her reflect poorly on him, to say the least. But, where Genius really shines is its use of seemingly unrelated, but ultimately contrasting flashbacks. We see Pierre and Marie Curie’s meet-cute and vignette’s of their groundbreaking research and discovery of radium. We see her working alongside her husband, exposing herself to radiation that would later kill her. She is clearly an equal, even if the Nobel Prize committee initially just wants to recognize her husband’s achievements. Pierre, though, won’t have this. He refuses the prize unless his wife is recognized, too.

This was the right thing to do. Einstein didn’t do it. What makes it worse is that it wasn’t out of spite — but pure oversight. He didn’t even consider that he should’ve, and that’s monstrous.

Genius can still be a hard show to watch because of its (historically, ultimately) unlikable main character. But, in Marić, they’ve found a sympathetic protagonist. Einstein is a genius, yes, but he’s not the only one. And, even as his theories enabled incredible scientific developments, he was holding someone back.

Genius airs on Tuesdays at 9 p.m. Eastern on the National Geographic Channel.

You May Also Like:At This Point, Einstein Is Basically the Villain in GeniusWho Was Mileva Maric? What to Know About Einstein’s First WifeWhy the Element Marie Curie Discovered Also Killed HerGenius’ Struggles to Depict Einstein’s Genius, Ironically