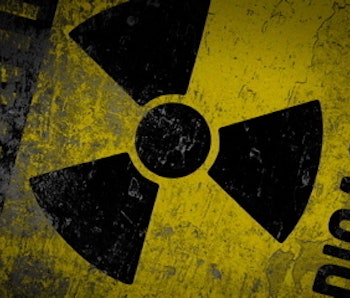 In Tuesday’s episode of National Geographic’s Genius, we meet Marie Curie, the brilliant female scientist at the turn of the century who discovered, among other things, the element radium.

The problem — as the episode clearly illustrates, with Curie’s eventual sickening and constant hacking — is that radium is highly dangerous. In fact, Curie’s clothing, lab notebooks, and furniture will all remain radioactive for the next 1,500 years.

After discovering the element in 1898, she spent the next 36 years studying the stuff, until her discovery (likely) killed her. People rarely die of aplastic anemia – a disease that impairs you body’s ability to produce blood cells – but three decades of nonstop radioactive exposure is implicated in her demise.

Curie carried tubes of radium in her pockets, but today, if you wanted to examine her notes at the Bibliothèque Nationale (National Library) in France, you would need to outfit yourself in protective garb, sign a waiver acknowledging that you’re voluntarily exposing yourself to radiation, and watch as the lab books are removed from a lead-lined box.

When a uranium atom decays, one of the products is radium. Radium also decays, and after a series of decaying events, eventually becomes lead. Radium, then, is always in a state of slow metamorphosis, and during this time it continually discharges electromagnetic rays. This is why it’s profoundly foolish to carry radium around in your pocket – but Curie and other prominent physicists were just learning this.

Radium exists all around us, but in such minuscule amounts (about one part per trillion) that it’s harmless to humans.

Before the U.S. Food and Drug Administration outlawed radium for personal use, the element was considered an essential ingredient in cooking pots meant to relieve farting, wristwatches, and even water: After taking a big tumble, Eben Byers, a wealthy American socialite, attempted to ease the pain in his by arm quaffing around 1,500 bottles of radium-infused Radithor. Eventually, the radioactive energy leeching from the radium caused Byer’s bones to crumble and his teeth to fall out. His radioactive body was buried in a lead-lined casket.

Today, radium is used in a more sensible manner. It’s currently being tested to treat cancer in patients whose prostate cancer has spread to their bones. So far, it appears that the radium treatment improves a patient’s odds of living longer.

Curie’s work in unveiling and even inventing the word “radioactivity” earned her not one, but two Noble Peace Prizes. Curie often romanticized the element that made her famous, entering her workroom to see the radium-lined bottles luminescing in the dark. “It was a lovely sight and one always new to us,” she wrote in her autobiographical notes. “The glowing tubes looked like faint, fairy lights.”

More like this
Science
6.30.2022 5:45 PM
The Large Hadron Collider restarts next week — here's what it's hunting for
By Rahul Rao
Science
6.21.2022 10:45 AM
Ancient stalagmites point to a massive drought that upturned 6th century Arabia
By Allison Parshall
Science
6.26.2022 10:00 AM
In the search for dark matter, an unexpected tool may give scientists hope
By Antonis Antoniou and The Conversation
Related Tags
Share: