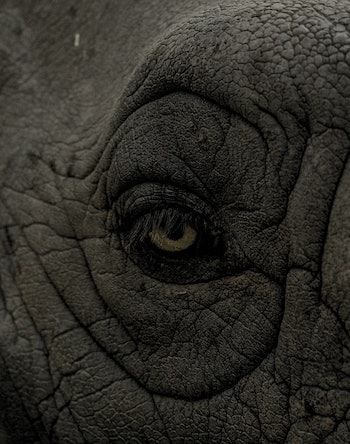 If you focus directly on the skin of an African elephant, you can transport yourself far away from the 11-foot-tall beast. Disregard the tusks, the flapping ears, and 20-inch-wide feet. Once you’ve zeroed in on its fissured hide, you might as well be looking at the dried flecks of mud in an ancient lakebed or the cracked surface of Mars.

For a long time, scientists had no idea why those cracks existed. But as a new study in Nature Communications shows, those cracks aren’t there because the elephant is in need of a whole lot of lotion. As it turns out, a million years of evolution planned out every single line.

In the study published Tuesday, researchers from the University of Geneva and Swiss Institute of Bioinformatics attempt to understand once and for all why elephant skin is so wrinkled. Using microscopy and computer modeling, they explain that the skin is not a mess of wrinkles but rather an important pattern of intricate cracks that make it possible for animals to stay cool and protect themselves from parasites.

“Indeed, their skin is of course wrinkled — that’s very visible — but if one has a much closer look, one realizes that the integument is also deeply sculpted by an intricate network of miniscule interconnected crevices,” study lead and University of Geneva professor Michel Milinkovitch, Ph.D., explains to Inverse.

“This beautiful fine pattern of millions of channels is adaptive because it prevents shedding of applied mud and allows for the spreading and retention of five to 10 times more water [than at the skin’s immediate surface], allowing the animal to efficiently control its body temperature with evaporative cooling.”

“It’s a new, beautiful example of how physical processes are involved in the development of animal forms and shapes.”

Milinkovitch’s lab specializes in the developmental and evolutionary mechanisms that created the diversity of life on Earth. He and his colleagues are especially interested in morphogenesis — the biological process that gives an organism its shape. In 2013, the lab determined that the face and jaw scales of crocodiles aren’t individual units but the result of a process analogous to the formation of cracks in cooling porcelain. After that study, Milinkovitch began to wonder whether a similar process was responsible for the skin of other dry-looking animals. And so five years ago, he turned his attention to the fractured-looking skin of African elephants.

Unlike those in Asia, African elephants have cracked skin. By examining elephant skin samples provided by scientists and museums using microscopes and physics-based modeling, the team determined that any cracks are actually fractures of the skin’s outermost layer, known as the stratum corneum. These fractures, in turn, are connected by a network of minuscule crevices. Together, they’re like a lattice of dried-up lake beds linked together by dried-up waterways, waiting for rain to fall.

They’re crucial for making the most of moisture in the dry African heat. When the scientists applied mud to the elephant skin in one experiment, they found that the network of millions of channels was necessary for preventing the dry skin from shedding immediately. Furthermore, when water was applied, the cracked skin retained five to ten times more water than a flat surface without cracks.

So, when African elephants bathe, spray, and roll around in mud, they aren’t just having fun — they’re engaging in an important process to protect themselves from their harsh environment. Slathering mud on the skin protects elephants from the sun and parasites, and the water they throw on their backs helps them to not overheat in the scorching African sun.

Unlike mud, the skin cracks are not generated by shrinking, but by bending. Using a computer model, the team learned that the cracks develop as bending stress on the growing epidermis of a young elephant causes the skin to get progressively thicker until it gets so thick that it cracks. That skin is hyper-keratinized (that is, rich in the protein keratin, which helps make nails, hair, and horns tough), and it grows increasingly thicker because the new skin cells form faster than they shed at the surface. In fact, the tough skin doesn’t really shed at all.

Grown Asian elephants don’t have cracks either, but this requires an evolutionary explanation. Milinkovitch reasons that cracks would be less useful to Asian elephants since they live in a wetter environment. Increased humidity reduces the efficiency of evaporative cooling, and the whole point of the cracks seems to be to hold water that can lower body temperature as it evaporates. In other words, Asian elephants don’t struggle to keep cool.

But African elephants, meanwhile, have less frequent access to water, and so they need skin that can store water for longer periods of time. They don’t have sweat and sebum glands, so sweat can’t help their skin stay moist and flexible. Cracks are a necessity, collecting water in and on the skin so the elephants can avoid overheating.

While the fractures of the skin are a necessity for elephants, they’re not quite as beneficial for humans. The scientists also discovered similarities between the skin morphology of African elephants and the skin of humans with an inherited disorder called ichythyosis vulgaris. This genetic disorder causes thick, dry sales to accumulate on the skin’s surface and currently has no cure. The striking resemblance between the two is the aspect of the study that Milinkovitch finds the most fascinating.

“If validated by future molecular and cell biology comparisons, this equivalence would then make a remarkable link between a human pathological condition and the skin of an iconic species of pachyderm,” Milinkovitch says. “This correspondence would also demonstrate that similar mutations that occurred independently in the evolutionary lineages of humans and African elephants turned out to be unfavorable in the former and adaptive in the latter.”

Milinkovitch hopes this study will be able to help validate this link between a human pathological condition and the skin of African elephants. “But most importantly,” he says, “it’s a new, beautiful example of how physical processes are involved in the development of animal forms and shapes.”