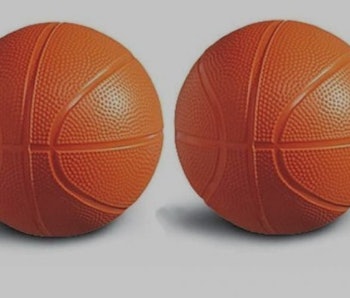 Puberty is full of ups and downs — sometimes literally. The moment when testicles descend is a pivotal one in the male life cycle, but as scientists point out in a PLOS Biology study published Thursday, we shouldn’t take it for granted. There was a point in evolutionary history when mammals branched into two groups: those who drop, and those who do not.

In the paper, the team from the Max Planck Institute of Molecular Cell Biology and Genetics shows, using DNA extracted from 71 species, why some male members of the “placental mammal” family — that includes us, and any other animal born from a womb — don’t experience testicular descent. Those animals belong to the Afrotherian family, a group of modern African mammals including manatees, elephants, and some insectivores. Instead of dropping their balls at puberty, these animals keep them close. For a long time, it’s been unclear when and why these animals evolved this trait.

It’s weird because testicle descent has an established biological purpose: keeping sperm factories cool. Testicles are primarily the site of human sperm production, and they function best at a temperature slightly lower than that of the body. Hanging in the scrotum, a few inches below the body, balls stay cool. But not, apparently, those belonging to elephants and their Afrotherian kin. Their balls hang out inside the body where they originally formed, somewhere around the kidneys.

It’s difficult to pinpoint the moment in mammalian evolutionary history their ball-retaining trait developed because it’s not easy to get any information about soft tissues, like testicles, from fossils. But at some point in history, the researchers write, there had to be a common ancestor of all mammals, and finding out whether that ancestor’s balls dropped would clarify when the Afrotherians’ weird characteristic occurred. So they set out to find it.

Since they didn’t have ancient soft tissue to work with, they had to use a roundabout way of determining which animals hung low and which didn’t. They turned to two genes, RXFP2 and INSL3, which are known to spur the development of an organ called the gubernaculum, the ligament that tugs the balls downward during puberty. Afrotherians and their kin, the team hypothesized, wouldn’t have these genes, or at least no working versions of them

Sure enough, their analysis of the genomes extracted from the 71 placental mammals showed that the hypothesis was true for four Afrotherians, namely the tenrec, cape elephant shrew, cape golden mole, and manatee. These animals lack functional versions of these genes, the researchers discovered, but what they do have are remnants of those genes, suggesting that the ancestor of all placental mammals did indeed have testicular descent. In other words, ball dropping was always the default, and it’s the Afrotherians that are a bit weird.

“These ‘molecular vestiges’ show that testicular descent was already present in the placental ancestor and was subsequently lost in Afrotheria,” the team writes.

Comparing the genes of the Afrotherian group to those of the other mammals showed that the split into ball-droppers and ball-keepers happened about 100 million years ago, when the Afrotherian group split from the ancestor of placental mammals. The mutations that made the gubernaculum genes nonfunctional in the four species, the team writes, occurred around 20 to 80 million years ago, which is fairly recent in evolutionary time. Furthermore, they found, the mutations in each of these species occurred independently. (Strangely, these genes are intact in elephants and rock hyrax, so there’s still no explanation for why their balls don’t drop.)

Now that we know that the balls of the ancestor of all placental mammals did drop, two big questions remain: What benefit did testicle retention confer on the four Afrotherian animals affected by the genes, and how are they still able to make sperm? Maybe it’s because the tenrecs and cape golden moles have a body temperature slightly lower than most (35 ̊C as opposed to 37 ̊C), but the same can’t be said for elephants and elephant shrews, who are just about as warm as we are. This aspect of their undescended testes remain a mystery, but we can safely assume one thing: They don’t have to be worried about getting kicked in the nuts.

More like this
Science
Feb. 5, 2023
The Plague Is Still Here — And It Could Infect Your Cat
By Tara Yarlagadda
Science
Jan. 29, 2023
Are coyotes dangerous to dogs and cats? Here’s how to keep your pets safe
By Tara Yarlagadda
Science
Jan. 29, 2023
Studying ancient human DNA has unlocked our origins — but the ethics are hazy
By Emiliano Rodríguez Mega and Knowable Magazine
LEARN SOMETHING NEW EVERY DAY.
Related Tags
Share: