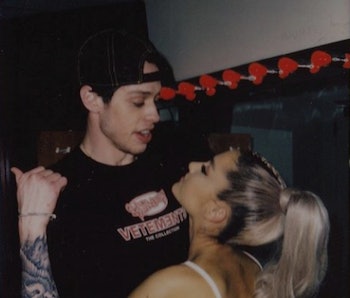 If you have been on the internet anytime in the past 24 hours, chances are you have asked yourself: What is BDE, and do I have it? (If you have to ask, the answer is no.) BDE stands for Big Dick Energy, a term birthed by Twitter to describe the calm confidence of a person with a real or metaphorical big dick that’s most famously been applied to comedian Pete Davidson after his fiancée Ariana Grande suggested he’s packing ten inches of heat. The term is loosely defined, but somehow, most people can agree whether a person has it or not. This may come down to the fact that the confidence BDE represents has a real psychological basis.

It was first used in two tweets in early June, but here’s how The Cut’s definitive guide to BDE, published Tuesday, defines the term:

BDE is a quiet confidence and ease with oneself that comes from knowing you have an enormous penis and you know what to do with it. It’s not cockiness, it’s not a power trip — it’s the opposite: a healthy, satisfied, low-key way you feel yourself.

Confidence is key to BDE, and, as David Frederick, Ph.D., an assistant professor of psychology at Chapman University, explains to Inverse in an email, there is some evidence showing that men who are happy with the size of their penis do indeed feel more confident in general, though he points out that the relationship remains speculative.

“[We] know that men who are more satisfied with their penis size, who think their penis size is larger than average, feel better about their bodies overall and are more comfortable in different romantic and sexual situations,” he says.

“Since large penis size is tied to testosterone, cultural stereotypes about masculinity, and overall body confidence, it is reasonable to speculate that men who think their penises are larger than average might pursue more sexual opportunities,” he continues.

He points to his 2006 Psychology of Men & Masculinity study entitled “Does size matter? Men’s and women’s views on penis size across the lifespan”: This study showed that men who think that their penis size is larger than average believe that they are more attractive overall. In the framework of BDE, which certainly applies to people without dicks (we bow down, Rihanna), actual penis size is not nearly as important as the size of the penis you believe you wield.

What’s less clear is how the confidence at the heart of BDE manifests in the way a person behaves. The range of seemingly dissimilar celebrities unanimously believed to have BDE gives us no indication: Frank Ocean, Cate Blanchett, Harry Styles, Timothée Chalamet, O-Town, Martha Stewart — what is it these people do that conveys BDE to those of us with mediocre DE at best?

Alas, there’s not much that science can do to point us in the right direction here. “Surprisingly, there is no data on whether penis size is related to sexual behavior,” says Frederick, though he mentions his own unpublished data on 441 adult men showing that men who are more confident in their penis size are generally more confident in dating and sexual activities.

No causality has been established yet, he notes, and third variables can’t be ruled out. “[Maybe] men who are more confident or narcissistic think they have larger penises and also are more comfortable approaching women. Additionally, we can’t rule out direction of causality — maybe having a large penis makes you more confident in approaching women, but the reverse could be true: Maybe having more dating success causes men to think they have a larger than average penis size,” he says.

BDE is based on the cultural assumption that a big penis is a better penis, which is in turn largely based on the assumed link between a big dick and sexual prowess. As psychiatrist Nicole Prause, Ph.D. and her team put it in a 2015 PLOS One study, “Women’s preferences for penis size may affect men’s comfort with their own bodies and may have implications for sexual health.” What is surprising is that studies have shown that women’s penis size preferences are not as extreme as one might expect from a society that got all flustered about Pete Davidson’s ten-inch lap hog.

To be clear, studies show that heterosexual women do want something a little bigger than average, but they aren’t looking for anything crazy. In a 2014 Psychology of Men and Masculinity study in which participants were asked their ideal penis length, women reported they wanted one 6.1 inches long, which is slightly above average. Males, however, reported that the ideal penis would be 7.27 inches long, which Frederick notes veers “into pornography-sized penises.”

This is to say that the whole concept of BDE may be based on a slightly false assumption that sexual partners want a big penis. But for better or worse, everyone now thinks that having a big penis is great, and if you believe you have one, then all the better for you: That’s BDE, baby.