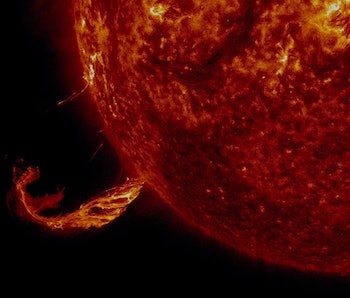 It’s a scientifically acknowledged paradox that hot weather is both sexy and bad for reproduction. Last year Tulane University’s Alan Barreca and colleagues showed in a working paper that 80-degree days correspond to lowered birth rates nine months later. New analysis shared with Inverse points to a decline in reproductive health, not sweaty celibacy, which may mean climate change will make the findings increasingly significant.

“It is NOT about sex,” Barreca told Inverse emphatically by email.

He says there are a couple lines of evidence which lead to this conclusion. For one, it looks like single folks are actually more likely to see some action on hot days. According to the American Time Use Survey, which has people log how they spend their lives, unmarried people are more likely to engage in “personal or private activities,” a nebulous grouping including actual intercourse and other sexy stuff, on hot days. Married couples showed no preference for getting it on in the heat or the cold.

Furthermore, the analysis shows the critical time for exposure to high heat is two weeks before conception. It doesn’t make sense that hot weather would make people less likely to have sex two weeks later, and it’s much more likely that something physiological is happening that impacts fertility. The evidence points in one direction: low sperm counts.

Studies in mammals have shown that exposure to elevated heat results in poor sperm production, or spermatogenesis. And, it seems that high temperatures affect sperm quality not right away, but at least two weeks after exposure. Female fertility does not appear to be similarly dependent on the weather.

It’s well known that keeping the junk cool is important for good reproductive health. The delicate testes are quite vulnerable, as they are placed outside the protection of a skeleton and protected only by a thin sac. But that vulnerability is the price paid for something much more important — exposure to cooler temperatures outside of the body. Men who sit around all day have lower sperm counts, likely because their testicles end up squished close to the body where it’s warmer, when they’d much prefer to hang loose.

Each additional day of weather over 80 degrees will result in 970 fewer births across the United States, Barreca found, after accounting for a slight rebound in births following the initial decline. Without aggressive action to curb climate change, temperature spikes alone could lower American birth rates by 1.7 percent.

This leads to a bit of a negative feedback loop, since fewer babies means fewer global mouths to feed, which should lead to fewer fossil fuel emissions that contribute to global warming. But that’s not a good thing, says Barreca. In developed countries, where the lifetime fertility rates are typically already below the rate required for the population to replace itself, a further decline stresses programs like Social Security that are paid for by the working-age population. And in the developing world, using declines in reproductive health as a tool to fight overpopulation is both inefficient and unfair.

The decline in fertility associated with extra heat makes family planning harder, which reduces security. Around the world, a decline in birth rates is connected with declines in child mortality, basic economic security, and access to resources for family planning. This means that fertility declines associated with hotter weather could ironically slow falling birth rates in parts of the world where they are still high.

Furthermore, while female fertility does not appear to be greatly affected by hot weather, the health of gestating fetuses appears to be. Studies have linked hotter, drier weather during pregnancy with low birth weight, which is a measure of infant health. This impact of global warming will only be amplified by the fertility declines associated with extreme heat. That’s because of the rebound effect — with fewer babies conceived in the hottest months, a few extra are conceived just after the hottest months. This means more infants will gestate during the hottest months of the year, and it seems the later part of the pregnancy is when the fetus is more vulnerable.

If you’re not having sex to make babies, low sperm counts can seem almost like a blessing. But you’d be a fool to count on climate change as your primary method of birth control, and global declines in reproductive health aren’t good for anyone.