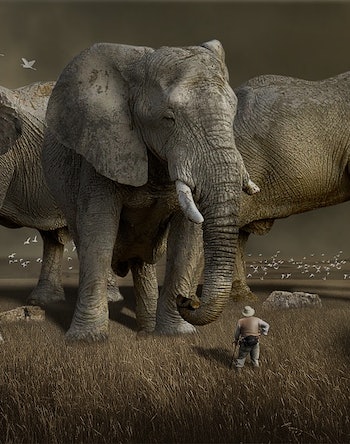 The criminal life has not been hard for ivory smugglers. Operating on vast, unwatched swaths of the African savanna, poachers slaughter elephants for their tusks, which move up through a pyramid of middlemen until they’re loaded en masse into shipping containers and dispatched at international ports. There are customs agents there, but out of roughly one billion containers shipped around the world each year, only one to two percent can be inspected. As the staggering statistics on the illegal ivory trade show, it’s pretty easy to make tons of ivory disappear.

Catching the culprits requires tracing the ivory back to the people who wrested it from the elephants, but doing so is no easy task. These are professional criminals, and they’ve developed a suite of tricks to avoid detection or at least only get caught with smaller seizures. But they seem to have met their match in a team of scientists led by the University of Washington’s Samuel Wasser, Ph.D., whose new paper in Science Advances describes how they used genetic testing to link together individual hauls at various ports, showing that the tusks in those seizures came from the same region and, likely, the same smuggling ring.

“I am very passionate about my work and when the patterns started emerging, it was indescribably exciting and energizing,” Wasser tells Inverse.

“By linking these matching seizures together like links in a chain,” he explained in a teleconference, “we were able to identify what we believe to be the three largest cartels moving ivory during this peak, 2011-2014 period.”

Those cartels are in Mombasa, Kenya; Entebbe, Uganda; and Lome, Togo.

Leading the Mombasa cartel is Feisal Mohamed Ali, perhaps the most notorious ivory trader in the world. Wasser’s 2015 paper helped land Feisal in jail the following year, but he was only tried for a single seizure.

For trafficking 228 whole tusks and 74 pieces of ivory worth about $4.2 million, Feisal was sentenced to 20 years in prison. At about two tons’ worth, that seizure is nothing compared to the 400 tons of ivory that experts estimate are shipped around the world annually. This year, he was acquitted — the case just wasn’t strong enough.

“The evidence relied on to convict the accused person has a lot of gaps and doubts,” said Mombasa High Court judge Dora Chepkwony at the time.

The methods outlined in the new paper have the potential to prevent similar issues in the future. “Our hope is that the data presented in this paper and discovered by others can help strengthen the case against this cartel, and tying Feisal and his co-conspirators to the multiple large ivory seizures as we described in the paper,” Wasser told reporters.

Wasser has been helping dismantle the ivory trade since his work began in 1979 in southern Tanzania, then the most heavily poached part of Africa. Though he started out studying baboons, he began applying the animal DNA and hormone measurement tools he developed to elephant poaching, which he says “was conspicuously occurring all around me.” Realizing his techniques would let him create a genetic map of elephants across Africa, he attempted to get DNA from ivory. “When that happened, I was off and running,” he says.

The brilliance of Wasser’s approach comes from its ability to eke geographic evidence out of tusk DNA. By testing a sample of ivory at 16 points along a strand of its DNA, his team is able to identify its geographic origin, down to 186 miles of its source. By taking samples from multiple tusks from 38 ivory seizures made between 2005 and 2016, they created a geographic database.

In reviewing the data from individual seizures, the team had a breakthrough. “What happened was we noticed that over half the tusks in these large seizures lacked a pair,” says Wasser. “In other words, only one of the two tusks from the same elephant was present.” Where, then, were the other pairs?

Painstakingly sorting tusks from other seizures uncovered the missing pairs in different shipments bound for different ports, which led the team to hypothesize that those shipments must have come from the same root source too. Sure enough, the genetic database showed that the separated tusk pairs were always shipped out of the same port, often within ten months of one another, and alongside tusks from similar geographic areas. As the work continued, it became increasingly clear that the individual shipments were being organized by the same few smuggling masterminds.

Feisal may have gotten off the hook this year, but if he — and others like him — can be implicated by genetic data tying all of their seizures together, then Africa’s dwindling elephant populations might just stand a chance.

There’s reason to be optimistic that Wasser’s data will prove useful. After all, it seems foolish for anyone to believe that individual poachers could be operating on their own.

“When you think about this, it costs about $25 for a bullet to kill an elephant and these poachers don’t have a lot of money,” explained Wasser at the teleconference. “And so someone needs to be supporting them, and the fact that all this ivory was being drawn out of the same locations suggests that that was indeed the case.”

Still, the methods and data his team has to offer are useless unless local governments cooperate with scientists. To figure out where the tusks in a seized shipment came from, a local government must first agree to hand over the shipment to scientists, who will then take samples from about 20 percent of the tusks for genotyping.

It’s easier said than done. The 2013 Convention on International Trade in Endangered Species enforced a rule that all ivory shipments must be turned over to the appropriate researchers within 90 days but, as Wasser told reporters, “almost no countries complied with that directive.”

There are a number of reasons for poor compliance.

“Competition and funding has created a climate that make this harder to achieve than one might assume. Law enforcement agencies compete with each other all the time (just like in the movies), NGOs and scientists do that too,” says Wasser. “There is also competition between these entities. The in-fighting and back-stabbing that results from this makes it hard for everyone to play in the same sandbox. In my opinion, that hurts everyone and is the biggest obstacle to our solving these problems.”

No matter how much Wasser and his team simplify their sorting and genotyping methods for scientists and officials, there’s no denying it is a time-consuming task. Hoping for cooperation is all we can do.

As it stands, the illegal ivory trade results in the deaths of 40,000 elephants each year. There are only about 400,000 left in Africa in total, according to the scientists’ best estimate, which means we’re losing one-tenth of our elephants each year. At this rate, there soon won’t be any elephants left to poach.

The idea that the source of their livelihood might run out does not seem to have changed the methods of ivory poachers, who only seem to have expanded their operations in recent years. When the elephants run out, there will be other exotic endangered wildlife to poach and sell, like pangolin for their scales and rhinos for their horns. And even then, there will always be more illegal goods to trade. As Wasser tells reporters, investigations on Feisal suggested he was part of a network that involved the Akasha Brothers Network, the biggest heroin, methamphetamine, and cocaine traffickers in East Africa.

Dismantling illegal trade, like sorting through shipping containers stuffed with bloody elephant tusks, will be painstaking and, in many instances, futile. But as Wasser’s efforts have proven, it doesn’t mean we shouldn’t try.

“I think there is a key synergy between scientists, law enforcement and NGOs,” he says, explaining that the tools scientists make complement the efforts of law enforcement to dig into criminal networks, with NGOs providing local connections the other parties might lack.

“All of these groups are theoretically committed to do the “right” thing,” he says. “Far more can be gained if everyone took advantage of these synergies and worked together to tackle this problem.”