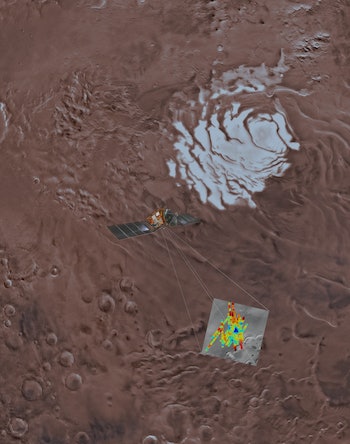 Scientists announced Wednesday that they’ve found evidence of a large body of water beneath the surface of Mars. It may not be little green men, but it’s pretty darn cool.

The announcement, which comes less than two months after the Curiosity Rover found evidence of organic molecules on Mars, adds one more piece to the puzzle for scientists searching the planet for signs that it could support life — or at least could have in the past. And while scientists have long known that Mars used to have liquid water billions of years ago, the fact that it could still have water is a big deal since there’s a possibility that this water may host living organisms.

The researchers involved in the discovery, a team of Italian astronomers and physicists, published their findings in a paper in the journal Science. In the paper, the team presents evidence collected from May 2012 to December 2015 by the MARSIS (Mars Advanced Radar for Subsurface and Ionosphere Sounding) experiment aboard the Mars Express spacecraft that shows evidence of a large body of liquid water.

Roberto Orosei, principal investigator of the MARSIS experiment and lead author of the paper, told reporters on Wednesday that the body of water is 1.5 kilometers — 0.93 miles — below the surface of Mars’ southern polar plane, Planum Australe, though he only brought up the number at the very end of the conference in response to a question.

“I’m afraid I didn’t say it. I was too excited,” Orosei told reporters. “The answer is 1.5 kilometers.”

To penetrate that deep into the planet and reach their big conclusion, scientists relied on data from the Mars Express, which shot radio waves down at the planet over a 20-mile-wide area and observed how they bounced back. Based on the way the radio waves echoed back to the spacecraft, the researchers could clearly tell that there was a sharp line separating the planet’s rock from something else beneath. Their conclusion was based on a measure called dielectric permittivity, one of the main properties involved in ground penetrating radar. What they saw was that something below the surface of the planet sent back a much brighter image, indicating that almost a mile down, there was something that had a higher dielectric permittivity than the material above it.

“We interpret this feature as a stable body of liquid water on Mars,” write the study’s authors.

But why would there be liquid water? We know that Mars’ thin atmosphere makes it very cold, and is likely responsible for much of the planet’s surface moisture escaping into space. These low temperatures would also suggest that any water inside the planet would be ice. But the study’s authors explain that the presence of perchlorates could explain it. These salts which have been found elsewhere on Mars would lower the freezing point of water enough to keep it in its liquid state, much like the phenomenon that occurs when you salt a driveway or sidewalk in winter.

“I can’t absolutely prove it’s water, but I sure can’t think of anything else that looks like this thing does other than liquid water,” Richard Zurek, a chief scientist for the Mars Program Office at NASA’s Jet Propulsion Laboratory who wasn’t involved in the study, tells Wired. “Maybe that has to do with a shortage of imagination on my part, but it probably has to do with a shortage of data, too.”

More research will be necessary to confirm these findings and explain their significance, but so far the scientific community seems relatively certain that this is indeed liquid water below the surface of Mars. It’s only a matter of time before we find out what’s really down there.