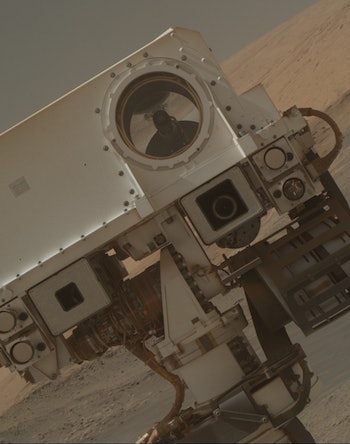 Are we alone in the universe? This question, which has been on the minds of Earthbound humans throughout history, is a driving force behind interplanetary exploration. A groundbreaking discovery by NASA’s Curiosity rover announced Thursday represents a step forward in humanity’s search for extraterrestrial life. Microscopic molecules, found in the Martian soil and sky, suggest the presence of biotic organisms.

In a pair of papers published on Thursday in the journal Science, NASA scientists announced two new entries in the catalog of evidence for life on Mars, collected by the Curiosity rover, which has been been scouring Mars for the past seven years. In one paper, scientists show evidence that the atmosphere of Mars has concentrations of methane that go up and down according to the season and occasionally spike. The other paper presents evidence that 3-billion-year-old rocks on Mars’ surface contain organic molecules. These observations of organic molecules suggest that life could have existed on Mars at some point in the its past — or possibly even its present.

We shouldn’t, however, be too hasty in jumping to conclusions: Though organic molecules are strongly associated with living organisms, there are other ways in which they can be created. “Most people hear organic and they think ‘life,’” David Weintraub, Ph.D., an associate professor of astronomy at Vanderbilt University who wasn’t involved in the new studies, tells Inverse.

“To a chemist, organic actually means the atom carbon in a molecule that’s bonded with hydrogen. That’s an organic molecule.” In other words, just because scientists found organic molecules doesn’t necessarily mean they found signs of past Martian life or the earliest signs of budding life. But, that also doesn’t mean they didn’t find signs of life. We just don’t know for sure.

Together, these findings enrich the search for life on Mars, and while they are far from providing definite answers, they suggest that more research is a good idea. Here are the main findings from each of the two papers:

In the first paper, a team of scientists led by Chris Webster, Ph.D., a senior research fellow at NASA’s Jet Propulsion Laboratory, shows that the concentration of methane in Mars’s atmosphere varies from season to season. Data collected over five years by Curiosity’s Tunable Laser Spectrometer revealed an average “background level” of methane of 0.41 parts per billion by volume (ppbv), which regularly dipped down to about 0.21 ppbv at the beginning of winter and rose to 0.65 ppbv at the end of summer. In addition to this seasonal pattern, there are also occasional temporary spikes of around 7 ppbv.

The significance of this finding is that methane — one of the simplest organic molecules — is often produced by living organisms, so atmospheric methane suggests that there could be microorganisms living beneath the surface of Mars that produce methane in a cyclical way. However, the study’s authors point out that biotic organisms are just one of many possible explanations for the presence of this gas: Methane could have been brought to the planet on falling asteroids, it could be produced by the UV decomposition of native or foreign rocks, and it could be released by geothermal processes, among other possible explanations.

In the second paper, a team led by Jen Eigenbrode, Ph.D., a research scientist at NASA’s Goddard Space Flight Center, showed clear evidence of organic molecules in 3-billion-year-old mudstone on Mars’ surface. Eigenbrode’s team positively identified four different organic molecules and found possible evidence of a fifth. Again, the researchers point out that their findings don’t confirm the presence of life on Mars, as these compounds could have been produced by abiotic — non-living — processes, much like the methane in the planet’s atmosphere. It does, however, suggest we’re looking in the right place.

The findings in this paper additionally suggest that Mars may have had an atmosphere similar to that of early Earth when life first began to form. If the environment on Mars was indeed more habitable 3 billion years ago, it’s possible that the Red Planet also had the ingredients for early, basic forms of life. But it’s just as possible that these molecules fell to the planet from the stars or simply came from decomposing rocks. It’s simply too early to tell.

Whatever the source of these molecules may be, though, Eigenbrode and Webster’s professional peers are convinced that these results merit further study with future Mars missions.

“The results convincingly show the long-awaited detection of organic compounds on Mars,” writes Inge Loes ten Kate, Ph.D., an assistant professor of Earth sciences and petrology at University of Utrecht in the Netherlands, in a perspective published in Science alongside the two new studies. “The detection of organic molecules and methane on Mars has far-ranging implications in light of potential past life on Mars.”