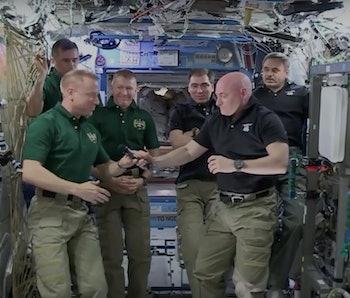 Sixty years ago on Monday, the National Aeronautics and Space Administration opened its doors, inviting humans to step out of them and into space. NASA’s subsequent launch of Alan Shepard into space, John Glenn into orbit, and Neil Armstrong and Buzz Aldrin onto the moon paved the way for the human space exploration that continues today. NASA historian and world-renowned “Dean of Space Policy” John Logsdon, Ph.D., watched and chronicled as humankind made all of those first giant leaps — and predicts that by NASA’s 120th anniversary, we’ll have surpassed them by bounds.

Logsdon, a space policy expert with a career spanning half a century and editor of the new Penguin Book of Outer Space Exploration, tells Inverse that by October 1, 2078, he expects humans to not only have returned to the places we’ve gone before but also to worlds we’ve never set foot on. He’s talking of course, about the moon and Mars.

“Well, I think there will be some number of humans living permanently on the moon,” he says. “Whether it’s an Antarctic-type scientific outpost, or a substantial settlement conducting mining or other resource activities, I think that we are on the path to go back to the Moon.”

Humans haven’t been on the moon since NASA astronaut Eugene Cernan left his footprints and his daughter’s initials there in December 1972, as part of Apollo 17, the program’s final mission. NASA, for its part, has not had the capability to send humans into space since it retired the space shuttle program in 2011, relying on Russian technology to get its astronauts to the International Space Station. “It’s a bit of an embarrassment,” says Logsdon, that a country that thinks of itself as the leading space power doesn’t have that capability. But in his perspective, the resurgence of interest in human spaceflight, especially from private companies like Elon Musk’s SpaceX and Jeff Bezos’s Blue Origin, marks the beginning of a new era of space exploration that could take us farther than we’ve ever ventured before.

“I think humans may even be born, live, and die — that is, live their whole life not on Earth,” he says.

A human colony on Mars, he says, could also feasibly be established by 2078. First envisioned by German rocket scientist Wernher von Braun in his 1952 book The Mars Project, exploration of the red planet is now far more than just theoretical. “I think it’s probable that there will be some number of people also living on Mars,” he says.

“You know that Elon Musk has proposed a million-person city,” he says, acknowledging that Musk has failed to follow through on many promises. “Many of the things he’s proposed he’s done, it’s important to recognize. So, somewhere between a dozen and a million people living on Mars.”

However, nodding to NASA’s intended goal of being a “civilian agency able to cooperate with other countries,” Logsdon adds: “They’re not all gonna be Americans.”